By Jack Rogers
From the September/October 2017 Issue

Last year, New Mexico secured one of the most coveted economic development projects in the country when Los Lunas was chosen to be home to Facebook’s massive new data center, the social media giant’s seventh data hub in the U.S.

This year, in the midst of construction on the $250-million Los Lunas facility (which is scheduled to open in 2018), Facebook doubled down on its investment: the company announced it would add a second, 400,000-square-foot building to the data center complex in NM, bringing the total square footage of the complex to 980,000 and the total value of the project to $500 million. 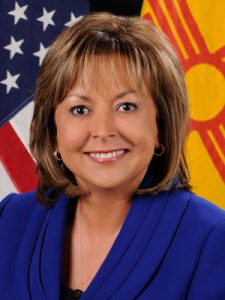 Both Facebook buildings will be entirely powered by solar energy. In July, Albuquerque-based Affordable Solar started construction of three solar farms to meet the green-energy needs of the data center’s first building. Facebook CEO Mark Zuckerberg has declared that the Los Lunas data center complex will be the most advanced, energy-efficient facility of its type in the world. 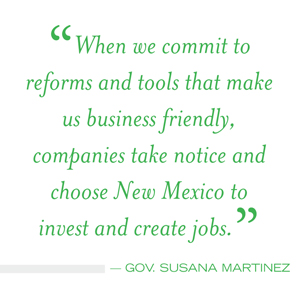 Next year may bring more good news for Los Lunas: when Facebook originally announced its data center project in NM, the social media leader said the project would involve six phases. So four more buildings for the complex may be in the planning stages.

In an exclusive interview with BF, Gov. Susana Martinez hailed the burgeoning Facebook project as the crown jewel of her effort to diversify New Mexico’s growth sectors. She credited NM’s success in luring Facebook (Los Lunas was chosen over competing sites in Utah) to a series of reforms her administration has instituted to make New Mexico a business friendly state.

“When I first went to [Facebook’s headquarters in] California to meet with them, we weren’t even on their radar. They weren’t considering New Mexico at all,” Martinez recalled. “But we told them all about our different reforms and we showed them our portfolio. We told them we were cutting taxes on a regular basis under my administration. We told them we were eliminating regulations that didn’t make sense.”

New Mexico has beefed up its dealmaking closing funds under Gov. Martinez, incentives which also helped seal the deal with Facebook. Last year, Martinez secured $56 million in new funding for the Local Economic Development Act (LEDA) capital outlay fund, the largest amount ever committed to the fund since it was created in 1994 to provide support to NM communities in their efforts to attract new development projects.

Attracting Facebook to the Land of Enchantment required substantial investment on the local and state levels. Los Lunas passed both an industrial revenue bond measure of up to $30 million and a $10-million LEDA outlay, and promised the company a monthly reimbursement of the village’s share of gross tax revenues. The state also offered Facebook access to up to $3 million in Job Training Incentive Program (JTIP) funding.

Tom Furlong, vice president of infrastructure at Facebook, said the company is grateful to Martinez for her support. “We continue to find a strong pool of talent to build our data center, and we’re excited that construction crews will be working on the site for years to come,” he said

Gov. Martinez has spearheaded efforts to leverage New Mexico’s impressive R&D assets to support the growth of new high-tech businesses in the state. Two years ago, she launched NM’s Technology Research Collaborative, which created a partnership between NM’s three national labs, the state’s three research universities and the private sector to fast-track innovations from the labs and provide the funding to commercialize these breakthroughs and bring new high-tech products to the market.

Martinez told BF she expects the Catalyst Fund to be invested in up to 10 emerging and existing capital investment funds (known as “portfolio” funds) in New Mexico; these funds in turn will support up to 50 high-tech businesses in their efforts to bring technological breakthroughs to market. There are matching-fund requirements for those receiving Catalyst Fund investments.

In May, Martinez announced a trio of venture fund as the first recipients of Catalyst Fund investments: the Cottonwood Technology Fund, Tramway Venture Partners and the Arrowhead Innovation Fund received $2.5 million, $1.3 million and $800,000, respectively.

“The Catalyst Fund is a really powerful tool that has enormous potential to become a high-tech jobs leader by helping home-grown businesses get off the ground,” Martinez told BF.

Also in May, BayoTech became the first company to receive backing from the Catalyst Fund. The Albuquerque-based firm received a total investment of $2 million, including $1.7 million from Catalyst partner Cottonwood Technology Fund and $300,000 from the state.

BayoTech, which has been working on methods to produce more affordable fertilizers to make growing food produce easier for populations around the world, recently announced a breakthrough in its hydrogen development. CEO Justin Eisenach told Albuquerque Business First his company has successfully produced its own hydrogen using technology licensed from Sandia National Laboratories. BayoTech can now make hydrogen out of methane with 84-percent efficiency, and it soon will be able to produce the gas at 99.99-percent purity.

Eisenach attributed this success to the financial backing his company received from the Catalyst Fund as well as to other local resources.

“The Catalyst Fund and the willingness of the state-leading venture capitalists, Cottonwood Technology Fund and Sun Mountain Capital, are a key reason for our success,” he said. “It also helps to have such a strong national lab and willing local and state governments who see the need to facilitate new business growth.”

“The Catalyst Fund leverages private investment for our homegrown startups, which helps us move our state forward as we continue to build a healthier economy,” Geisel said. “By adding another partner in ABQid, we strengthen our commitment to the success of homegrown New Mexico companies and hardworking New Mexican entrepreneurs.”

Gov. Martinez also is making sure that small businesses are not left out of her push to diversify NM’s high-tech growth sectors. The governor’s Technology Research Collaborative announced the launch of the Innovation Voucher Program. This competitive grant is designed to enable early-stage science and technology companies in New Mexico to receive small amounts of funding to help offset costs during critical moments of company growth.

The program is available to science and technology startups affiliated with a New Mexico incubator or accelerator program. Each company can receive one award per year and no more than three awards over 5 years. Awards are capped at $2,000.

In August, Gov. Martinez announced the expansion of Raytheon’s Albuquerque manufacturing operations, which will create 60 new high-tech manufacturing jobs. The announcement came on the heels of New Mexico being ranked the third-fastest growing economy in the nation by the U.S. Department of Commerce. New Mexico also was recently ranked seventh in the nation for private-sector job growth, creating nearly 19,000 new private-sector jobs over the last year.

“This is great news for New Mexico and another example of what’s possible when businesses know they’re welcome in our state,” Martinez said in announcing the Raytheon expansion.

“We’ve seen it over and over again—when we commit to reforms and tools that make us more competitive and business friendly, companies from around the nation and the world take notice and choose New Mexico to invest and create jobs,” she said.

New Mexico’s JTIP program is expanding on its impressive record as one of the nation’s leading workforce development initiatives. Martinez recently joined local business leaders to announce that JTIP created more than 2,000 jobs in 2017. This brings the total amount of JTIP jobs created over the last seven years to nearly 10,000. The program also saw its second-highest average rural wage at more than $21 an hour.

“When we work to grow and diversify our economy in New Mexico it means more jobs for hardworking New Mexicans,” Martinez said. “I’m proud of the success we’ve seen in the JTIP program and other key incentives and we will continue to build on it. We love showing the world what we already know: New Mexico is the best place to live, work and raise a family.”