By the BF Staff
From the January February 2022 Issue

Buckeye, AZ was nothing more than a tiny dot on the map as recently as 2000, when it was home to 6,537 residents, according to the U.S. Census. Since then, this western suburb of Phoenix has been among the five fastest-growing cities in the country. In 2020, Buckeye’s population was 91,502 —and that number continues to climb.

Given the straight-up growth trajectory of both parties, the new partnership has earned Buckeye and KORE the Bronze Award in Business Facilities magazine’s Deal of the Year competition.

“KORE Power’s investment in Buckeye to produce clean, renewable energy aligns with the City Council’s sustainability goals and our goal for significant employment opportunities for our residents,” Buckeye Mayor Eric Orsborn said. “The project is not just a win for Buckeye, but for the West Valley, the State of Arizona and the clean-energy industry.”

Construction on the new facility, called KOREPlex, is to begin early this year with the goal of being operational by 2023. KOREPlex will support up to 12 gigawatt-hours of battery cell production annually. According to the company, 12 gigawatt hours is the capacity needed to produce enough power for 3.2 million homes annually. KOREPlex will operate with net-zero carbon emissions through strategic partnerships and solar and storage co-generations.

“We needed a location for our factory that had a track record of supporting energy storage, a growing clean transportation sector, and a workforce that could deliver American-made battery technology that the supply chain so desperately needs,” Lindsay Gorrill, KORE Power’s chief executive officer, said in a press release. “Arizona hit a home run.” 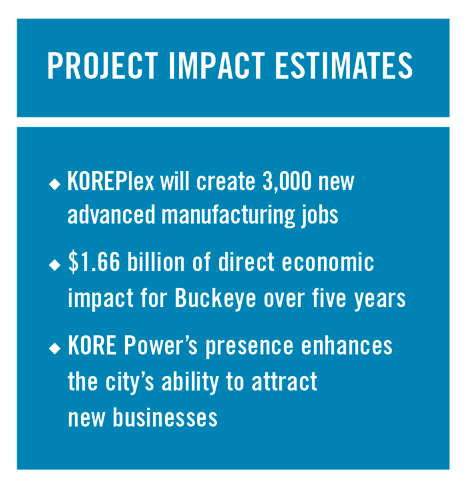 “Arizona is thrilled to be selected as the home of the country’s first U.S.-owned lithium-ion battery manufacturing facility,” Arizona Gov. Doug Ducey said in a press release. “Not only will this facility create thousands of new jobs, it will position Arizona as an anchor in the global battery manufacturing supply chain.”

The selection of Buckeye for the KOREPlex facility was the result of KORE Power’s two-year search. Estimates say KOREPlex will produce more than 6,000 direct and indirect jobs and yield an estimated $1.66 billion in direct economic impact output for the city over five years. It is anticipated that indirect revenues could total $173 million for the city and $537 million for the region.

In choosing Buckeye, KORE Power positions itself in one of the fastest-growing metropolitan areas in the U.S. Studies by the company show that 92 percent of resident workers do not work in Buckeye, but would prefer jobs closer to their homes. Estimates say the presence of KOREPlex will increase the number of jobs in Buckeye by 20 percent.

Learn more about our 2021 Economic Development of the Year Gold, Silver, and Impact Awards. 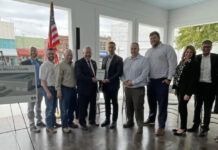 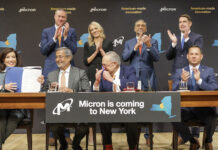 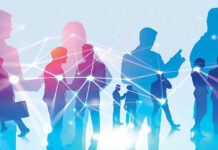 Missouri October 6, 2022
Simcote and Ostara are each investing $17 million in their new facilities, while American Food Groups is building a $800 million operation.

Feature Story October 6, 2022
Where tech talent is concentrated is one of the most influential factors in the potential growth of the industry in a region.