When the Samsung Electronics Corp. was deciding where to build its new U.S. semiconductor manufacturing facility, it turned to a region it knows well, and the growing Central Texas community of Taylor, in Williamson County, will be the beneficiary.

Texas Gov. Greg Abbott announced on Nov. 23, that Samsung’s $17 billion investment is the largest foreign direct investment in Texas on record. Since 1996, Samsung has invested more than $35 billion in the state.

For that reason, Texas, the community of Taylor, and Samsung Electronics are the recipients of Business Facilities’ magazine’s Deal of the Year Silver Award.

Samsung knows Central Texas well because the South Korea-based electronics manufacturer has a 25-year history in the area. It built Samsung Austin Semiconductor in 1996, which has been a fixture in the state capital for more than 20 years. Although Taylor, a community of 16,267 residents as of 2020, is 35 miles northeast of Austin, the distance between the manufacturing plants will be only 15 miles.

The new 6 million-square-foot facility will occupy more than 1,200 acres, and it will bring Samsung’s total investment in the U.S. to more than $47 billion since 1978.

In a press release, Abbott said, “The new manufacturing facility will produce advanced logic chips that will power next-generation devices of applications such as mobile, 5G, high-performance computing and artificial intelligence.”

The project is expected to create more than 2,000 high-tech jobs and at least 6,500 construction jobs. Construction is to begin early this year, and it is hoped production can start in the latter half of 2024.

“As we add a new facility in Taylor, Samsung is laying the groundwork for another chapter in our future,” said Dr. Kinam Kim, vice chairman and CEO of Samsung’s Device Solutions Division. “With greater manufacturing capacity, we will be able to better serve the needs of our customers.

“We are also proud to be bringing more jobs and supporting the training and talent development for local communities as Samsung celebrates 25 years of semiconductor manufacturing in the United States.”

While Samsung’s investment in the Taylor project is great, a report in the Dallas Morning News says that the semiconductor manufacturer could receive as much as $954 million in property-tax breaks over the life of agreements with Taylor, its school district, and Williamson County. Samsung also will receive a $27 million grant from Texas Enterprise Fund for job creation. 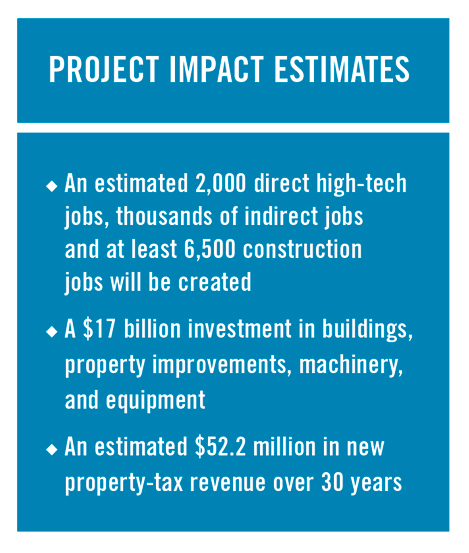 In addition, Taylor, Williamson County, and the state are expected to fund most of the $260 million needed for infrastructure improvements near the site, the report said.

The tradeoff, according to the Morning News, is that Taylor will benefit from high-paying jobs in a cutting-edge industry and take a much more visible place in the region’s economic boom. Taylor officials believe the Samsung project will net the community about $52.2 million in new property-tax revenue over the 30-year life of an incentivized deal—much, much more than if the tract remained undeveloped for 30 years.

Samsung has pledged to make annual charitable contributions of at least $300,000 annually to the Taylor community, and it will acquire goods and services from businesses and individuals in the community. It also promises to hire a diverse workforce, conduct community job fairs, and assist in the recruitment and hiring of individuals from Taylor and Williamson County.

Learn more about our 2021 Economic Development of the Year Gold, Bronze and Impact Awards.