All deals are good. Some just appear to be better than others. Once again, Business Facilities magazine is announcing the Deal of the Year awards, our tribute to the best deals of 2021. These impressive projects were selected by our panel of esteemed judges, who reviewed dozens of entries to narrow the winners down to Gold, Silver and Bronze selections. (Read about Ford Motor Company and SK Innovation’s battery and vehicle manufacturing plant in West Tennessee below.)

As you will see on the following pages, the judges went big in their selections. Ford, Samsung and KORE Power are investing big bucks into their deals in West Tennessee, Texas and Arizona, respectfully. That is great news for the regions that these companies are investing in—a sure way to generate even more jobs in the area to service these companies as they construct their facilities and operate them for decades to come.

But, it is also a sign that businesses believe in the communities they are moving to. Whether they were one of our winners this year or not, all of the entrants showed that they have a lot of faith in the regions they are moving to and are excited to put the first shovel into the ground and get working on their new projects.

And, for the first time, BF is introducing our Impact Awards, given in 15 different categories to companies that are standing out in a crowd in their respective divisions.

Business Facilities wants to thank everyone who participated in this annual event, from the economic development boards who submitted their entries to our judges who took the time—a lot of time this year—to grade all the candidates and pick the winners.

The Ford Motor Company and SK Innovation are investing about $5.6 billion to turn a previously-empty lot into a state-of-the-art battery and vehicle manufacturing plant in West Tennessee.

The idea of attracting a corporate giant to West Tennessee began in earnest in 2009. Over the next 12 years, the state poured $174 million into an empty 4,100-acre tract of farmland called the Memphis Regional Megasite, which lies near the town of Stanton, about 50 miles northeast of Memphis.

That all changed on Sept. 28, when Tennessee Gov. Bill Lee announced the Ford Motor Company and SK Innovation would turn 3,600 of those empty acres into Blue Oval City, where production of next-generation, all-electric F-series trucks is to begin in 2025.

The agreement is to bring 5,800 jobs to West Tennessee, and it is the reason why Business Facilities magazine is presenting its Deal of the Year Gold Award to West Tennessee, the Ford Motor Company and SK Innovation, a South Korean battery manufacturer.

According to a press release, Blue Oval City is to become “the largest, most advanced and most efficient production campus in Ford’s history.”  The campus is to include a Ford assembly plant, a supplier park, and a battery manufacturing plant that SK Innovation will operate as part of this joint venture with Ford. The partners will invest $5.6 billion in the project.

“This is a huge victory for our state and the West Tennessee region,” Tennessee Lt. Gov. Randy McNally said via a press release on the day the deal was announced. “It is no secret that the megasite’s failure to attract a tenant has been a long-term disappointment for our state.

“Today’s announcement wipes all that away. I could not be happier that Ford will be making this type of investment in our state. A major manufacturing facility in this area will transform the economy of West Tennessee and provide high-quality, high-paying jobs for the entire region.”

The Memphis Business Journal reported that Tennessee has promised investments and incentives that could total $884 million. In a special session on Oct. 20, 2021, the Tennessee General Assembly approved legislation that included a $500 million Economic and Community Development grant to Ford and its affiliates, a $40 million allocation for construction of a Tennessee College of Applied Technology, as well as funds for a new highway interchange and a state-owned wastewater facility. 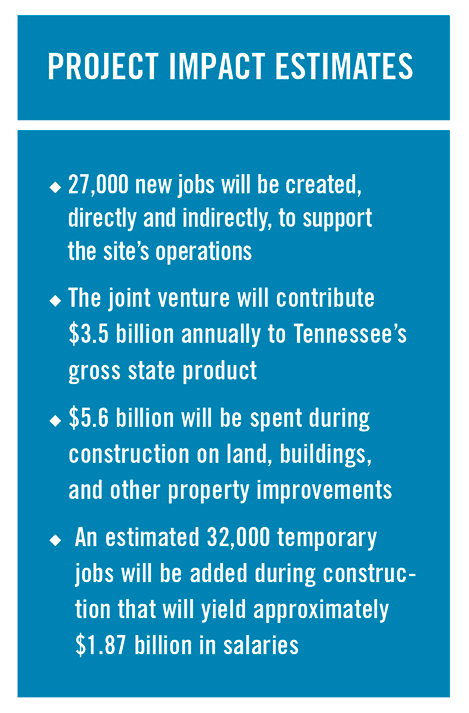 While Tennessee’s financial investment was important in attracting Ford and SK Innovation, Greg Christensen, Ford’s electrical vehicle footprint director for North America, told the Business Journal that the Memphis Regional Megasite tract itself was just as important to his company.

He explained that the demand for electronic vehicles was surpassing Ford’s expectations, so the company needed a plot of land that was shovel-ready. The 3,600-acre Blue Oval City, named for Ford’s iconic brand logo, includes room for the applied-technology training site where workforce training for thousands of prospective employees can happen.

“When you think about the selection of a site, 3,600 acres is truly differentiating,” Christensen said to the Business Journal. He added that Blue Oval City will be unlike any other because it will be more than a manufacturing plant. Instead, it will be what he termed “an ecosystem” that is all-inclusive.

The 2021 Economic Development Deal of the Year recognizes the locations and economic development agencies that landed the highest-impact projects announced between July 1, 2020 and the entry deadline of December 1, 2021. For the purposes of this award, an “economic development deal” is defined as:

Nominees were required to provide official economic impact numbers produced by the RIMS II, IMPLAN or REMI certified analysis methods, including direct, indirect and induced figures for economic output, job creation and capital investment when available, as well as anticipated new wages; and a narrative explaining how the deal came together, including details on regional cooperation, innovative incentives and training programs in partnership with higher education resources, where applicable.

Judges evaluated the narrative and the economic impact numbers and gave each project a score ranging from zero to 100. The highest- rated entry is our Gold winner and is considered our official Economic Development Deal of the Year; the second, third and selected category entries win the Silver, Bronze and Impact awards, respectively. The awards were announced in January.

Learn more about our 2021 Economic Development of the Year Silver, Bronze and Impact Awards.