By Business Facilities Editorial Staff
From the January/February 2018 Issue

The Silver Award in Business Facilities’ annual Deal of the Year competition went to Greater New Orleans and Louisiana Economic Development for DXC Technology’s commitment to establish a Digital Transformation Center in NOLA’s Central Business District, an initiative that will create 2,000 high-wage jobs in the global IT and business enterprise sector.

DXC Technology’s decision to establish its largest Digital Transformation Center in New Orleans will generate an estimated annual payroll of $133 million by 2024. The announcement of the deal in November capped a yearlong site selection process that saw the company scrutinize dozens of cities across the U.S. before choosing New Orleans. Gov. John Bel Edwards said the project “cements Louisiana’s position as one of the nation’s fastest-growing states in the software and IT services sector.”

“Louisiana has set the standard for diversification into new growth sectors, maximizing the participation of its impressive higher education resources to attract 21st-century businesses,” BF Editor in Chief Jack Rogers said.  “High-tech hubs are blossoming across the state, from cybersecurity in Bossier City to IT services and digital media in New Orleans,” Rogers added.

A Fortune 250 company, DXC Technology formed in April 2017 through the merger of CSC and the Enterprise Services business of Hewlett Packard Enterprise. DXC Technology announced in November 2017 that it would establish a 2,000-job Digital Transformation Center in the Central Business District of New Orleans.

At the center, next-generation technology services will be developed and delivered to support the digital transformations of DXC Technology clients. The project will create more permanent jobs at one site than any prior economic development deal in announced in Louisiana. DXC Technology recently announced it has reached a lease agreement for multiple floors of the Freeport McMoRan Building located on Poydras Street, across from the Mercedes-Benz Superdome. The Virginia-based company will hire 300 IT and business enterprise professionals during 2018, then ramp up to 2,000 jobs and reach an annual payroll exceeding $133 million by 2025. 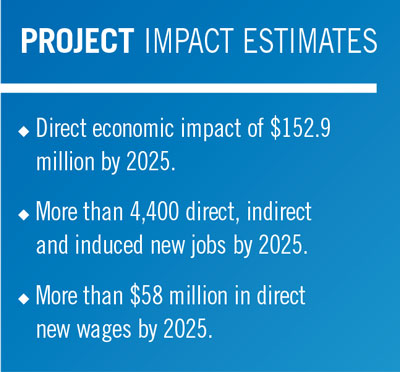 Based on project criteria, Louisiana presented multiple location options, including the emerging Water Campus between downtown Baton Rouge and the main campus of LSU; the corporate corridor of St. Tammany Parish on the north shore of Lake Pontchartrain, across from New Orleans; and the Central Business District of New Orleans itself. Evaluations of population density, higher education campuses, and digital media and IT workforce numbers in New Orleans convinced the company that Louisiana could accommodate a project beyond the scope of its original proposal.

“This recognition of DXC Technology’s landmark project by Business Facilities highlights a successful deal that was long in the making, and one that was built by a dynamic partnership of economic developers, elected officials, LED FastStart® and higher education leaders,” said Louisiana Economic Development Secretary Don Pierson.

Read about the rest of the 2017 Economic Deal of the Year Award winners: Gold, Bronze, and Honorable Mentions.