By Business Facilities Editorial Staff
From the January/February 2018 Issue

“With an incredible bounty of 13,000 direct new jobs in the next five years and a world-class, 20-million-square-foot production facility, our judges unanimously agreed that the Foxconn project deserved our top honor as the 2017 Deal of the Year,” BF Editor in Chief Jack Rogers said.

In October, Foxconn (Hon Hai Precision Industry Co., Ltd) confirmed it would build North America’s first 10.5 TFT-LCD flat-screen panel production facility in Mount Pleasant, WI. With 13,000 jobs and a capital investment of more than $10 billion, Foxconn’s investment in Wisconsin is by far the state’s largest economic development project and one of the largest greenfield investments by a foreign-based company in U.S. history, as measured by jobs.

Foxconn is projecting that up to 150 suppliers will locate in close proximity to the new plant, creating more than 35,000 jobs throughout Wisconsin (including direct, indirect and induced jobs). An estimated 10,000 construction workers will be employed to build the 20-million-square-foot facility, which is to be completed by the end of 2020. The mammoth floor space at the new Foxconn campus will be large enough to hold 11 Lambeau Fields (legendary home of the Green Bay Packers football team). It will be located in Southeastern Wisconsin. Foxconn’s investment will create the first liquid crystal display (LCD) manufacturing facility in North America and the only one globally that is not located in Asia.

Taiwan-based Foxconn, a major supplier to Apple (producing iPhones in China), received an estimated $3 billion in incentives from Wisconsin, including tax credits and infrastructure upgrades. When the deal was announced, Gov. Scott Walker declared the project would give Wisconsin its own version of Silicon Valley; jobs at the new Foxconn plant are expected to pay about $53,000 a year.

Gov. Walker and Foxconn Founder and CEO Terry Gou signed a Memorandum of Understanding (MOU) at the Milwaukee Art Museum on July 27, 2017. The MOU was also signed by Wisconsin Economic Development Corporation CEO Mark Hogan and Special Assistant to the Chairman and CEO of Foxconn Louis K. Woo.

The Foxconn project will truly be transformative for the Village of Mount Pleasant, Racine County, southeastern Wisconsin and the entire state.

The current population in the Village of Mount Pleasant is 26,360. The addition of 13,000 new, well-paid positions (base wage: $53,875) will have a dramatic effect on the local as well as state economy. According to an economic study conducted by Ernst & Young (EY) using IMPLAN economic analysis software, the direct creation of 13,000 new positions over five years will support at least 35,245 jobs throughout Wisconsin (including direct, indirect and induced jobs). The total labor income created by this project will exceed $2 billion annually once Foxconn is fully operational. The analysis estimates that Foxconn employees will pay roughly $65 million per year in state and local taxes on their incomes, purchases and properties. An increase in tax revenue of this magnitude will have a lasting impact on local and state budgets for years.

In addition, due to the high sensitivity of products required to produce TFT-LCD panels, Foxconn expects roughly 150 suppliers to locate in close proximity to the company’s production facility. This requirement will drastically change the industrial environment in Racine and surrounding counties, resulting in higher land values, an increase in employment as described above and an increase in local business revenue.

Foxconn is expected to purchase $4.26 billion of non-labor operating inputs annually, an estimated one-third of which ($1.4 billion worth) will be sourced from within Wisconsin.

Constructing a 20-million-square-foot facility will cost roughly $5 billion. Completing the project on time will require 10,000 construction workers per year for five years, making a significant local economic impact on the construction industry. According to EY’s economic analysis, direct spending on construction will support an average of 16,205 construction and related jobs (direct, indirect and induced) over a four-year period; will support a one-time shock of $9.34 billion in sales for Wisconsin businesses (over four years); will create $2.44 billion in direct labor income and will generate nearly $500 million in state and local tax revenue for Wisconsin state and local governments.

Of that $500 million, an estimated $154 million will be state and local sales taxes on construction materials. In addition to the construction costs of the facility, community infrastructure, housing, commercial development and industrial supply chain development will be required, creating additional construction opportunities in the region.

The successful attraction of a highly innovative company like Foxconn will help Wisconsin transform its workforce. The local community college, Gateway Technical College, already is working on a major expansion and curriculum updates to meet the future needs of Foxconn’s advanced manufacturing process. This new curriculum will serve as an example to the state’s other technical schools as they prepare the WI workforce for advanced manufacturing jobs.

The decision to construct North America’s first TFT LCD facility will create an entirely new industry within Wisconsin. This is exactly why this project is so transformative.

Wisconsin’s final contract with Foxconn added new job requirements on an up to $3 billion subsidy package (the largest incentive package to date offered to a foreign firm investing in the U.S.) for the Racine County flat-screen plant and drawing a personal guarantee of up to $500 million from Gou, one of the world’s richest men.

“It really speaks to the level of commitment and confidence that he has that this is going to be a great investment not just for him but for the state of Wisconsin,” Hogan said of Gou.

According a November report in the Milwaukee Business Journal, draft terms of Wisconsin’s contract with Foxconn include the following requirements:

WEDC officials have publicly expressed confidence that Hon Hai—one of the world’s largest companies—would be on the hook for the potential clawbacks no matter what.

The Foxconn project also reportedly includes more than $700 million in local incentives for Foxconn. If the project goes well, it could create 22,000 jobs outside the plant at suppliers, restaurants and other businesses in southeastern Wisconsin.

Foxconn has already taken space in a large industrial building in Racine County, signing a lease for 13315 Globe Drive in Mount Pleasant. That is the site of a 156,000-square-foot building recently developed by Opus Group just east of I-94 and south of Highway 20 in the Mount Pleasant Business Park.

Wisconsin has created a marketplace website to allow existing business to list their services, populating a database that Foxconn procurement managers can easily navigate to find local suppliers. 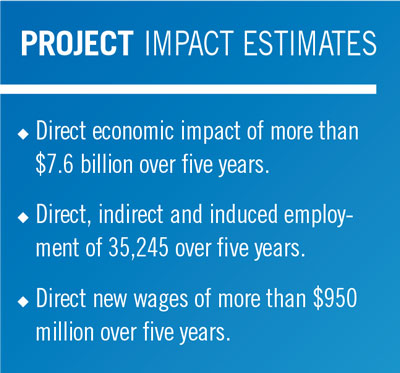 These firms will be able to hear from emerging companies with innovative products or services tied to areas such as Internet of Things, imaging, data storage, blockchain, software and data analytics in sectors ranging from health care to information systems, and from power electronics to telecommunications.

Click here for the latest on Foxconn’s investment in Wisconsin.

Read about the rest of the 2017 Economic Deal of the Year Award winners: Silver, Bronze, and Honorable Mentions.