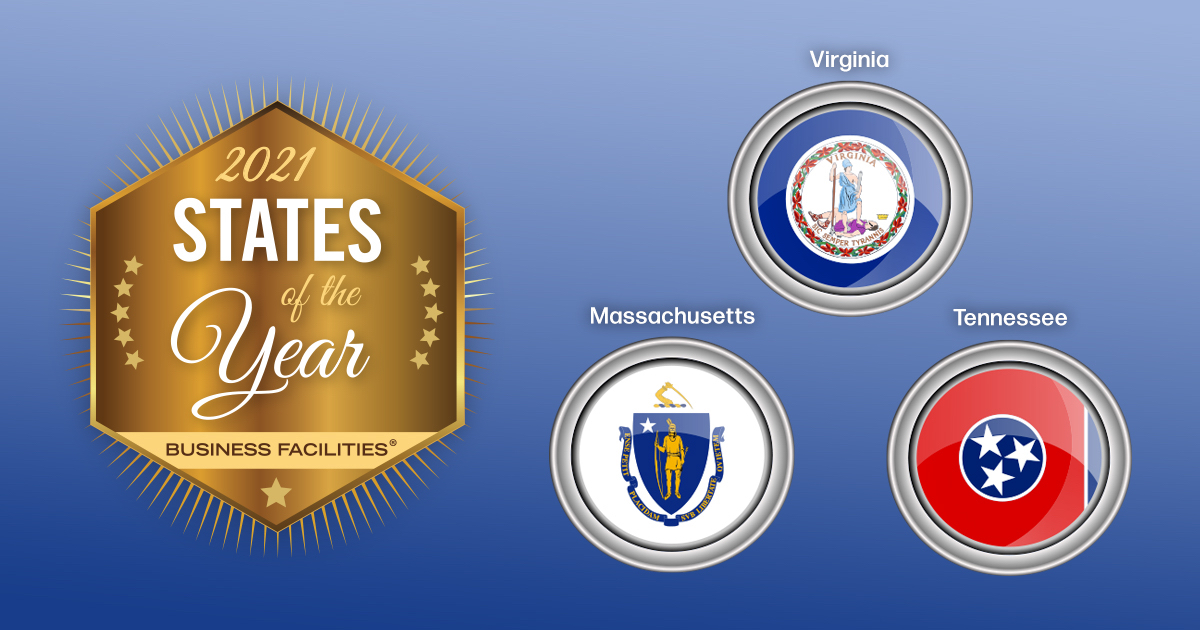 RED BANK, NJ — Virginia, Tennessee and Massachusetts have been named winners of the Business Facilities’ 2021 States of the Year awards, the first time BF has named three winners to this annual contest.

“For the first time, we thought it was appropriate to name three winners in this prestigious process,” said BF Editorial Director Seth Mendelson. “As businesses look to expand or relocate, the questions they have about communities are becoming more complex. They want to know as much as they can about a community before making a final decision. We think this is going to help them make informed choices.”

Virginia finished first in the Best Overall Business Climate because of the steps many economic development councils in the commonwealth, both local and statewide, are taking to make the area more attractive, Mendelson said. “The commonwealth’s location, right next to the District of Columbia, combined with its pro-business work environment, strong workforce and educational systems, makes it great place to do business in,” he added.

The proof is in the pudding. With a workforce in excess of 4.1 million people, Virginia has an unemployment rate of just 3.6%, the 10th lowest in the country. The commonwealth also runs a number of highly-successful workforce programs, including the Virginia Talent Accelerator Program, a customizable job-specific training and recruitment initiative; and Fast Forward Virginia, a short-term credential program to train Virginians for top, in-demand jobs across the commonwealth. Virginia also operates workforce development programs and workforce connection programs to assist employers in finding qualified workers and to assist workers in finding suitable jobs.

Tennessee was selected as the Best Dealmaker thanks to recent deals with such companies as Ford (6,000 jobs), Smith & Wesson (750), Chewy Inc. (1,200), Thermo Fisher Scientific (1,400) and an Amazon corporate headquarters in Nashville (5,000), among others. In addition, the Global Business Alliance recently noted that Tennessee was second to only Minnesota in the growth of jobs from foreign-based employers, growing by 33.4% over the last five years. The state is now home to more than 860 global companies operating plants, offices and other facilities.

“Tennessee is making a name for itself as a leader in attracting new businesses,” Mendelson added. “With one of the country’s lowest per capita tax burdens, no state income tax or state property tax, the state is making a big statement on how to serve as a magnet that is drawing a lot of interest from the business community.”

Massachusetts has long been known as the home to some of the top universities and colleges in the country. “With schools like MIT, Harvard, Tufts, Boston College and Northeastern, among many others, Massachusetts produces the highly-skilled employees who are in so much demand,” Mendelson said. “The government is also involved. For example, through its MassHire State Workforce Board, the commonwealth is developing strategies to ensure workers have the skills they need to fill the jobs businesses create. For many companies seeking skilled employees that makes a big difference.”

Business Facilities is a national publication that has been the leading location source for corporate site selectors and economic development professionals for more than 50 years. For more information, contact Seth Mendelson at [email protected].

Click here to read about previous State of the Year award winners.