E-commerce and logistics companies claimed a larger share of the 100 largest industrial and logistics leases signed in 2018 than they did a year earlier, according to a new report from CBRE.

“These figures illustrate that there still is a lot of momentum behind e-commerce uses in U.S. warehouse leasing, despite concerns that the sector’s expansion may be reaching its later stages,” said David Egan, CBRE’s Global Head of Industrial & Logistics Research. “We expect this type of leasing momentum to continue in 2019.”

The two are related in that many logistics companies, specifically third-party logistics providers, handle e-commerce distribution for their clients. Regardless of industry, the largest industrial leases got even bigger last year. The top 100 from last year — spanning uses such as e-commerce, logistics, manufacturing, food and beverage, technology and retailing — totaled 19 percent more space than the largest of 2017. 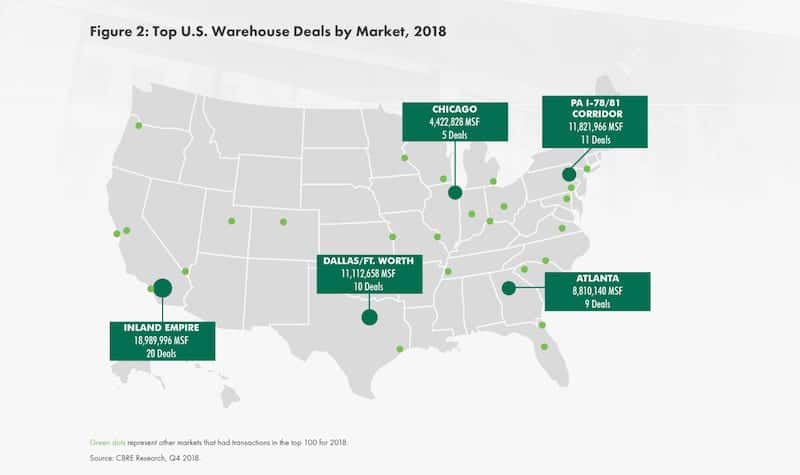 “The Inland Empire combines some of the key requirements of today’s ecommerce and logistics providers,” said Vice Chairman Barbara Perrier. “It sits close to Southern California’s massive population base as well as in proximity to the ports, it is home to some of the newest, most advanced state-of-the-art facilities required by most ecommerce tenants and it’s in a location that is ideal for companies that have a coastal strategy, meaning they want to have a presence on both U.S. coasts.

“The Inland Empire has what much of LA doesn’t: space,” she continued. ”This area encompasses 500 million square feet. That means there’s a lot of potential for new state-of-the-art warehouses with all the bells and whistles.”

The full report is available here.