There was much chatter on the other side of the Pond this week immediately after Queen Elizabeth delivered to Parliament the new minority Tory government’s manifesto, essentially a high-level blueprint for a series of laws that must be passed—and/or repealed—to facilitate the UK’s impending exit from the European Union. 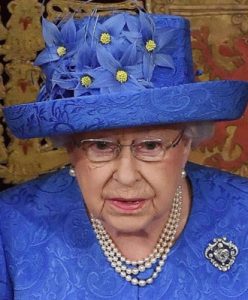 As soon as the Queen finished the speech, which was drafted by Prime Minister Theresa May’s newly formed coalition government, a Twitter-storm erupted over what seemed to be the most compelling element of Her Majesty’s performance: the hat she was wearing. [The Royal Crown, Orb and Scepter are not required for the monarch’s presentation of the elected government’s agenda.]

The debate centered on whether Elizabeth, known for the subtlety of her public utterances as well her stylish collection of elegant chapeaus, was using her hat to send a sartorial message to her subjects regarding her true feelings about their momentous Brexit decision. Several Fleet Street tabloids instantly noted the uncanny resemblance between Liz’s lid—a deep blue number adorned with five gold buttons arranged in a slightly wobbly circle—and the European Union’s flag, which features a circle of 12 gold stars on a field of midnight blue.

Was Queen Elizabeth signaling her displeasure with the outcome of the UK’s Brexit referendum? We’ve got our own theory about that, but first let’s review some early indicators that predict the UK may have to absorb some significant losses when it leaves the EU (the UK invoked Article 50 of the EU treaty in March, triggering two years of negotiations that will set the terms for Brexit).

Our friends at fDi Intelligence, the foremost global trackers of trends in foreign direct investment, recently revealed that FDI into the UK (as of the end of April) has plummeted since the June 2016 Brexit referendum. Foreign investors announced 728 projects in the UK worth $28 billion in first 10 months after the Brexit vote, down by 34.4 percent (measured in capital investment) from the 862 projects worth $42.7 billion during the same period the previous year, according to greenfield investment monitor fDi Markets.

The plunge in FDI coming into the UK would have been greater if it had not been partially offset by a surge in the real estate sector, fDi Markets reports. The British pound lost about 20 percent of its value (measured against the U.S. dollar) in the immediate aftermath of the Brexit vote, making UK land and property about 20 percent cheaper in dollar terms for foreign investors.

Meanwhile, a recent survey of more than 500 corporate executives of U.S. firms has revealed that those in food and beverage, life sciences and financial services are most likely to consider relocating from the UK after Brexit. Most ominously, nearly 40 percent of U.S. businesses with a base in the UK told the survey they are considering moving elsewhere in the EU bloc because of Brexit. The survey by international law firm Gowling WLG also found that two-thirds of the 533 U.S. firms polled said the UK’s vote to the leave the EU was already impacting investments choices in the country.

The most significant impact from Brexit is likely to be felt first in the UK’s financial sector, based in the old part of London known as The City. A consensus of financial industry analysts is convinced that Brexit will bring an end to London’s status as one of the world’s top financial centers (London perennially has given New York and Hong Kong a run for their money as the global moolah capital). Frankfurt and Dublin are emerging as the biggest winners: Bank of America, Standard Chartered and Barclays reportedly are considering Ireland’s capital for their EU base to ensure continued access to the single market; Goldman Sachs and Citigroup are among banks eyeing Frankfurt, according to reports.

With banks increasingly expecting a so-called “hard” Brexit— i.e., the loss of their right to sell services freely around the EU from London — the financial giants are rushing to have new or expanded offices open for business inside the continental EU bloc before the UK departs in 2019. Frankfurt, already home to Deutsche Bank and the European Central Bank, is a frontrunner to cash in on the migration; Dublin also is well-positioned because its laws and regulations mimic those of the UK and (after 2019) it will be the only English-speaking financial hub remaining in the EU.

Now, back to the Queen’s hat. Was she signaling her disappointment with the outcome of the Brexit vote and expressing an enduring affinity for the UK’s soon-to-be-severed ties with the EU? Perhaps.

But we suspect there may be a much more plausible explanation for the five wobbly gold emblems on Elizabeth’s blue hat—a not-so-subtle message to the 27 remaining EU members who will be negotiating the terms of Brexit with the UK: “After we go, others will follow.”

That’s right, Queen Elizabeth was previewing the future EU flag, circa 2025. Put that in your bonnet, Brussels.