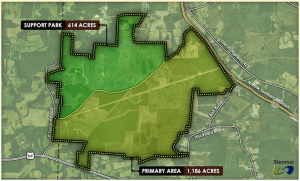 A vital step in positioning Chatham County and the Siler City area for major economic development has been achieved with the recent state certification of the Chatham Randolph Megasite, an industrial site west of Siler City, NC. State certification means that the site has undergone a rigorous review process to ensure that it is ready for immediate development, which makes it more attractive to industries.

“Being the largest state-certified site in North Carolina is a huge boost for our area,” said Dianne Reid, president of the Chatham Economic Development Corporation (EDC). “The megasite already has been identified as one of the top three sites in the entire South for an automotive plant.  The site’s central location, access to reliable power, and available water and wastewater capacity are major assets.”

Also, Duke Energy announced that it will contribute $100,000 to accelerate the preparation of the property, putting it on a faster track for large-scale development by a manufacturing or automotive project. Duke Energy has been supportive of the megasite since the beginning. It conducted a site study and developed conceptual area plans last year, as part of the company’s 2013 Site Readiness Program.

She added, “Since 2001, North Carolina’s Certified Sites program has provided a way for communities to be better prepared for economic development, by offering an inventory of industrial sites that have undergone a rigorous process to ensure they meet a consistent set of standards. Certified Sites reduce the risk associated with development for companies by providing detailed information about a site including access, environment and utilities.”

County Commissioner Chairman Walter Petty said, “We have been working for a while with neighboring counties to brand the Highway 421 corridor as an advanced manufacturing center. The Chatham Randolph Megasite will jumpstart that effort.”

Petty added that it is hard to convey the tremendous impact that a plant of this magnitude would have on the entire county and the region. “You have to consider the potential value of jobs created, capital investment, construction costs and the many related businesses locating here to serve a large plant.”

Siler City Mayor John Grimes said that the town has been an enthusiastic partner and is ready to support efforts to market the megasite. “The megasite is truly a potential game changer for this entire region, but we are excited about it being in our area where jobs are greatly needed and appreciated.”

Extensive collaboration by several key partners is what made this possible, said Commissioner Vice Chair Brian Bock. “We applaud the teamwork involved in getting this site studied and readied for the certification process in record time. It shows that Chatham County is not only open for business, but eager for companies to take a hard look at us.”

County Commissioner Pam Stewart said that the Board of Commissioners is providing funding to the EDC in the coming budget year to help develop and implement a marketing plan for the site.  “We also used proceeds from the sale of a parcel at the Carolina Business Campus in Siler City to help get the megasite ready for certification.”

The certification process began in early 2013 when the site was selected for Duke Energy’s Site Readiness Program. Reid said, “During that six-month process, site selectors McCallum-Sweeney analyzed the site and reported on its prospects for attracting a major employer. Based on proximity to a large, skilled and productive workforce, McCallum-Sweeney concluded the site had strong potential to attract an advanced manufacturing user, such as an auto maker.”

County Commissioner Mike Cross said he is excited about what the site’s certification means in terms of the greatly improved potential for in-county jobs.  “A second smaller megasite located in Moncure will undergo analysis via the Duke Energy Site Readiness Program this summer.  It is adjacent to several large industries.”