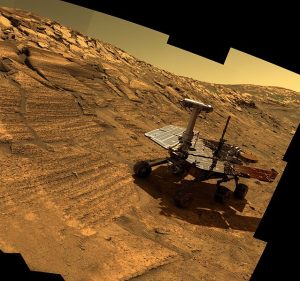 There’s a robot that landed on Mars in 2004 and was only supposed to work for 90 days. It’s a rover, like its younger brother Curiosity, and we called it Opportunity.

Opportunity and its twin, Spirit, were launched in 2003. They were originally designated MER-1 and MER-2 by NASA, but while the rovers were being constructed at the Jet Propulsion Lab in Pasadena, CA, the space agency decided to hold a student essay competition to rename them. Sofi Collis, a nine-year-old who came to America as an orphan from Russia, sent in the winning entry from her third-grade class in Arizona.

“I used to live in an orphanage,” Sofi wrote. “It was dark and cold and lonely. At night, I looked up at the sparkly sky and felt better. I dreamed I could fly there. In America, I can make all my dreams come true. Thank you for the ‘Spirit” and the ‘Opportunity.”

Spirit and Opportunity each were equipped with six motorized wheels and solar arrays that can generate about 140 watts for up to four hours per Sol [a Sol is about an hour longer than a day on Earth]. Rechargeable lithium ion batteries store energy for use at night. The rovers were designed to have a maximum speed of up to 2 inches/second and to operate safely at tilts up to 30 degrees.

Onboard computers on the rovers use a 20 MHz CPU that has 128 MB of memory. Gold film and a layer of silica insulates the unit, enabling it to operate at temperatures ranging from 40 below zero to 104 degrees F. Metal from the World Trade Center was used to create shields that protect cables on the rovers’ drilling mechanisms.

In 2007, three years after beginning their expedition on Mars, Spirit and Opportunity had to shut down for several months as raging dust storms limited solar power to a level that nearly caused a permanent failure of both rovers. In 2009, Spirit’s exploration came to an end when it got stuck in deep sand. But Opportunity is still roaming around and investigating the surface of the Red Planet more than 3,100 Sols after it was expected to shut down.

A few weeks ago, Opportunity discovered a three-foot-long rock that looked interesting to NASA’s scientists. Opportunity conducted tests on the rock using its onboard Alpha particle X-ray spectrometer and discovered minerals usually found in clay. Opportunity also determined that the water that formed the clay had a low enough acidity to support the creation of life.

We bring this up because — on the same Sol we read about Opportunity’s discovery of the near-certainty that life forms existed on another planet — we also were digesting the American Society of Civil Engineers’ annual report card on America’s infrastructure. (We dug up the ASCE report as part of our research for Business Facilities’ annual state ranking for Best Infrastructure).

We’ll cut to the chase here:  America’s infrastructure has received a grade of D+. To keep it simple for a nation that has let the best infrastructure in the world crumble in less than three decades, ASCE is using the familiar elementary school five-grade system. As anyone who has wrestled with junior high school algebra knows, a D+ means you didn’t fail because the teacher took pity on you.

ASCE also grades each state on its infrastructure. The highest grade that any state received was a C+. Most of the states received a D and there were a few awarded a D-, which we’ll assume was the association’s way of flunking a state without completely humiliating it.

ASCE gives a breakdown of its criteria for each state’s infrastructure grade, including the number of bridges that are about to collapse, the number of dams that have not been certified and the number of roads that have potholes the size of Jupiter, among other concerns. Reading these reports for state after state is like reading about the damage wrought by aerial bombardment in WWII. Almost every state, it seems, has hundreds of dilapidated bridges that aren’t being fixed while millions of Americans drive over these aging structures every day.

ASCE estimates the U.S. needs to spend at least $3.6 trillion to repair and modernize its infrastructure by 2020 to remain competitive as a modern industrial power.

Which brings us back to the surface of Mars, which has no infrastructure. Whatever life forms it once hosted were not around long enough to evolve into creatures with the intelligence to cover dirt with asphalt, call these structures highways and build vehicles powered by hemi engines to drive over them.

Opportunity wasn’t equipped with the kind of artificial intelligence now coming out of the labs, neural networks that can give machines an intuitive processing capability a step closer to human reasoning, attached to gigabytes of memory.

If Opportunity had these programs, he might turn his man-made eyes back to the place he came from and wonder how it came to be that the nation that built him couldn’t summon the spirit and opportunity to rebuild itself. He might wonder how such a smart people got so dumb so fast.