The recent presidential election and scheduled transition of power from Republican President Donald Trump to Democrat President-elect Joe Biden is just one of several issues causing uncertainty for business leaders at a tumultuous time in U.S. history. As is the case during every election season, many wonder how the election will affect the U.S. commercial real estate (CRE) markets, with various theories proposed regarding how political control impacts the industry. 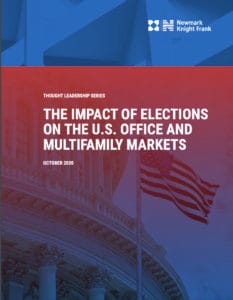 In its recent study, Newmark Knight Frank examined the impact of political control on the U.S. office and multifamily markets, along with the outside factors that may play a greater role. It also tackles the question of the impact of uncertainty in election years and the effect it may have on CRE.

The conclusion? Looking at political party alone, there isn’t much difference in returns on investment in CRE under the presidential administrations of the last 40 years, according to “The Impact of Elections on the U.S. Office and Multifamily Markets.”

“Though there may be some correlation between the political party in control of the White House and Congress with stronger office or multifamily market fundamentals, correlation is not causation,” the study asserts. “There are economic and geopolitical factors that likely have greater influence. This may come as a relief to investors who are concerned about the potential impact of November’s elections on the commercial real estate market.”

Want to read more about CRE and economic development?