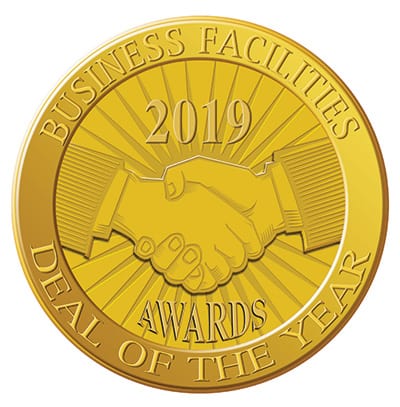 Michigan Economic Development Corp. has been awarded Business Facilities’ 2019 Deal of the Year Gold Award for Fiat Chrysler Automobiles’ (FCA) expansion, a project that includes a new $4.5-billion Jeep assembly plant in Detroit and production expansions at four other Michigan plants which will bring more than 15,000 direct and indirect new jobs to the region over the next three decades.

”The Fiat Chrysler expansion should erase any doubt that Michigan remains the undisputed automotive champ of North America,” said BF Editor in Chief Jack Rogers. “Motown is putting the pedal to the metal on its impressive economic resurgence.”

“Jackson County hit the trifecta with this project: a crown jewel for a high tech growth sector, a major FDI success and an anchor for regional development for years to come,” Rogers said.

“Anyone who thinks Dallas is all hat and no cattle better take another look,” Rogers said. “Dallas is one of the nation’s fastest-growing data center hubs, and now it will be home to a coveted administrative HQ for an emerging tech giant.”

In one of its most competitive Deal of the Year contests to date, BF also awarded Honorable Mention Awards to:

Want to learn more about Business Facilities’ awards and rankings?

Check out all the latest awards and rankings news related to economic development, corporate relocation, corporate expansion and site selection.