The world’s chief executives view the risk of a recession as their biggest external concern in 2020, while attracting and retaining talent ranks as their top internal concern, according to a new survey from The Conference Board. These execs also feel unsettled by trade uncertainty, political instability, and more intense competition from disruptive technologies. However, they plan to counter such forces by developing more innovative cultures and new business models.

Conducted annually since 1999 by The Conference Board, this year’s survey gauged nearly 750 CEOs and nearly 800 other C-Suite executives from mainly four regions: Europe, Latin America, Asia, and the United States. As part of the survey, participants weighed in on which external and internal issues warrant the most immediate attention in 2020.

Around the world, CEOs and other C-Suite executives rank a recession as their top external worry in the year ahead for the second year in a row. For U.S. CEOs, a recession rose from being their third biggest concern in 2019 to their top one in 2020. The issue surpassed cybersecurity, their top concern in 2019. 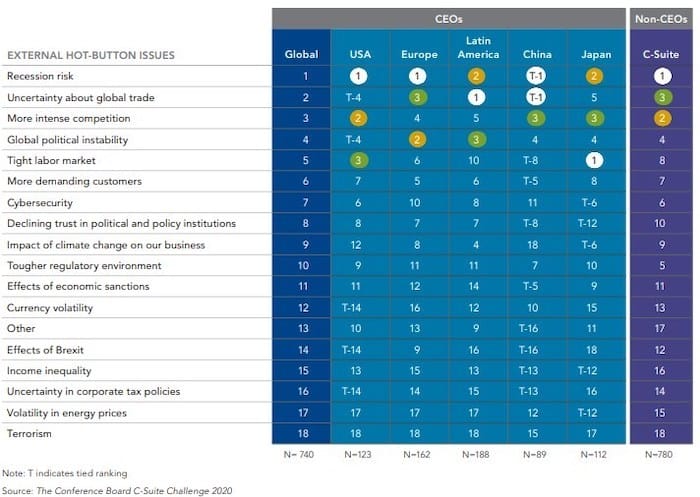 Globally, CEOs globally rank uncertainty about global trade as their second biggest external worry in 2020. In the U.S., it ranks as the fourth biggest worry, tied with its affiliate issue: global political instability. Chinese CEOs rank trade uncertainty as their top worry, tied with their fear of a recession, while CEOs in Latin America and Europe rank it first and third, respectively.

“The ongoing concerns about recession risk among business leaders reflect the slowing economy of the past year and the uncertainties about the outcome of the trade disputes and other policy concerns,” said Bart van Ark, Chief Economist at The Conference Board. “However, given a slightly better outlook for the global economy and an easing of trade tensions, we anticipate that a drumbeat of negative sentiment – which can become a self-fulling prophecy – can be avoided, and that we will see more confidence about business prospects in 2020.”

Concern about climate change is also heating up. For 2020, CEOs globally ranked the impact of climate change on their business as ninth, up from 11th in 2019.

Regardless of a company’s location or size, attracting and retaining top talent ranks as the number-one internal stressor for CEOs and other C-Suite executives globally in 2020. A tight labor market, among other issues, is intensifying the talent battle. CEOs globally, for example, cite the tight labor market as their fifth biggest external worry in the year ahead.

“The global challenge in acquiring and retaining talent requires companies to be more strategic – knowing not only what qualities and skills to recruit for, but also how to recruit more efficiently and effectively,” said Rebecca Lea Ray, Ph.D., Executive Vice President of Human Capital at The Conference Board. “To support such efforts, they can consider leveraging artificial intelligence, a valuable tool when used with the proper understanding and safeguards.” 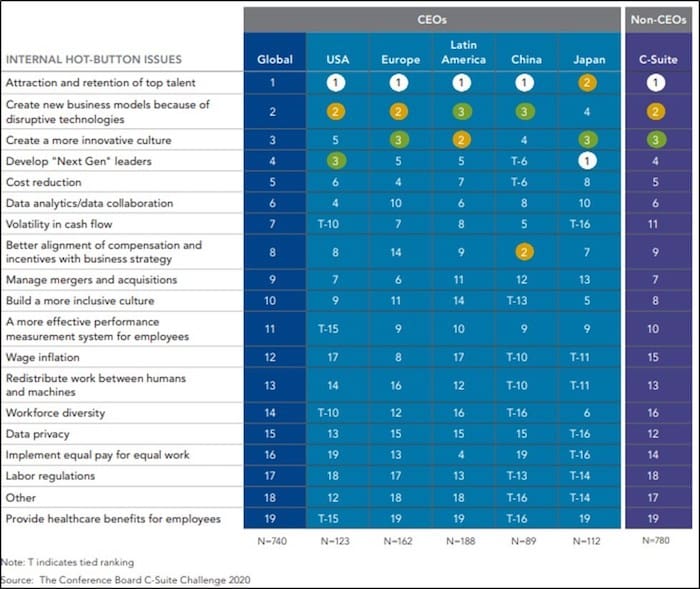 “When it comes to creating new business models because of disruptive technologies, there is more urgency among emerging-market CEOs than those in more mature economies,” said Chuck Mitchell, Executive Director of Knowledge, Content, and Quality at The Conference Board. “This should raise a warning flag about possible complacency considering the current speed of disruption. The truth is that, today, companies no longer enjoy the luxury of a decades-long lead time to adapt to the digital revolution.”

Check out all the latest surveys and research regarding economic development, corporate relocation, corporate expansion and site selection.