The Tomball Business & Technology Park, a project of the Tomball Economic Development Corp. (TEDC), encompasses 99.5 acres of land located at the northwest corner of Hufsmith-Kohrville Road and Holderrieth Road, within the City of Tomball. The Park is Master Planned and Deed Restricted with a Light Industrial zoning classification. 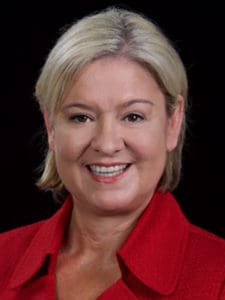 The Tomball Business & Technology Park is fully served with all utilities and provides off-site detention. Its flexible lot sizes and competitive pricing combined with low property taxes and a skilled local labor force make the Park an attractive location for new and expanding businesses. There are approximately 58.5 usable acres still available.

TEDC recently announced the sale of 16.78 acres of land located at the northwest corner of Holderrieth and South Persimmon in the Tomball Business & Technology Park to Hoelscher Properties, LLC.

The buyer is part of the Hoelscher Group, which includes Hoelscher Weatherstrip Manufacturing Co., Inc. This 60-year old family-owned company, which specializes in custom doors and weatherstripping, will construct and occupy an approximately 193,000 square-foot building in the Park. The $10.6 million project is expected to bring 119 new full-time jobs to the City of Tomball. 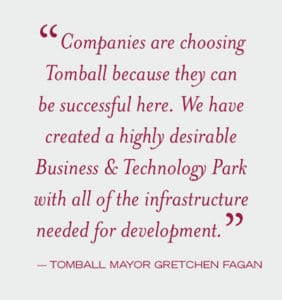 “Companies are choosing Tomball because they can be successful here,” said Tomball Mayor Gretchen Fagan. Fagan, who also serves as President of the Tomball Economic Development Corp., credits the deal to the TEDC’s proactive initiatives that make Tomball ideal for investment. “We have created a highly desirable Business & Technology Park with all of the infrastructure needed for development and have put in place tax incentives to attract high quality businesses, such as Hoelscher,” Fagan stated.

The TEDC is a non-profit Type B Corporation created pursuant to the Texas Development Corporation Act of 1979. The TEDC was formed in 1994, after the citizens of Tomball voted to pass a ½ cent sales tax dedicated to economic development. The TEDC is governed by a seven-member Board of Directors appointed by the Tomball City Council.

In the wake of two San Francisco-based Fortune 500 companies deciding to move their headquarters to Texas, TX officials have been putting a full-court-press on small and mid-sized Silicon Valley players to join the migration to the Lone Star State. McKesson and Core-Mark Holding Co. recently announced plans to move their HQ to Dallas.

Texas executives and economic developers traveled to San Francisco last month to entice California companies to expand or relocate to Texas. Led by Texas Economic Development Corporation, in partnership with the Office of Governor Greg Abbott, the mission was designed to carry the message that companies can “Go Big in Texas” among an audience of corporate executives, site selectors and others involved in expanding and relocating businesses.

“The Lone Star State is the ultimate destination for economic success,” said Governor Abbott. “From our world class infrastructure to our strong right to work laws, Texas remains the envy of the nation. I am grateful that this delegation of business leaders and developers have the opportunity to share what makes Texas so great. Whether you’re an entrepreneur in California or a business owner from the East Coast, I encourage everyone to consider making a fruitful investment in the Lone Star State.”

“Texas has a strong track record of attracting companies from California to expand or relocate to Texas,” said Robert Allen, President and CEO of Texas Economic Development Corporation. “Our business-friendly climate, overall lower cost of living, and skilled workforce are just some of the factors that appeal to companies like Toyota, Apple, Google, LiveOps, and Oracle, which have expanded in Texas since 2014.”

While headquartered in Cupertino, CA, Apple, Inc. is a company that is investing in Texas. In December 2018, the tech giant announced plans to build a new $1 billion, 133-acre campus in Austin, initially creating 5,000 new jobs with the capacity to expand to 15,000 jobs. The investment is slated to establish Apple as the largest private employer in Austin, and continue to grow Texas’ technology sector. Already, Texas leads the nation in exports and holds the title of the top tech-exporting state.