Empire State Development and the Virginia Economic Development Partnership, dual winners of Amazon’s bidding derby for its massive HQ2 project, have each been selected to receive the Gold Award for Business Facilities’ 2018 Economic Development Deal of the Year, the first tie in the annual contest’s history. 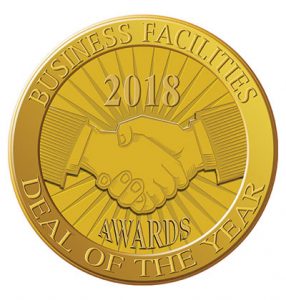 “The most coveted mega-project of the young century may have been bisected by Jeff Bezos’ last-minute decision to pick two locations for HQ2, but our judges decided not to downgrade the winners—who each deserve to stand in the spotlight on our Gold Award red carpet,” BF Editor in Chief Jack Rogers said.

Long Island City in Queens, NY and Crystal City, VA will each develop a portion of the HQ2 project, which in Amazon’s RFP was projected to generate a $5-billion investment and at least 50,000 new jobs.

The Silver Award in BF‘s annual Deal of the Year competition went to the Alabama Department of Commerce for the $1.6-billion Mazda-Toyota automotive assembly plant, a project that will create 4,000 new jobs.

“For too many years, the crumbling façade of this majestic station was a symbol of Detroit’s fiscal collapse,” Rogers noted. “Now it will become the crown jewel of Detroit’s turbocharged recovery. Motown is back and it’s hitting on all cylinders. Bravo, Detroit!”

Rogers said the 2018 contest was BF‘s most robust Deal of the Year competition to date, with more than 40 top-tier projects nominated representing locations across the U.S. and Canada.

BF‘s blue-ribbon panel of Deal of the Year judges also selected these locations/organizations (and the 10 projects they secured) for Honorable Mention Awards in the 2018 contest:

Business Facilities congratulates all of the winners of our 2018 Deal of the Year Awards.