The manufacturing sector is in the midst of a period of great change with far reaching implications for businesses across the global industrial landscape, according to a new Cushman & Wakefield report. 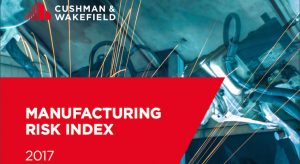 The Manufacturing Risk Index is an annual survey of the manufacturing sector which measures how political, economic, technological and environmental risks are managed during portfolio assessment and site selection by occupiers. The report contains an Established Index which ranks the 30 largest countries by manufacturing output, and a Pioneering Index which measures the attractiveness on less mature markets where manufacturers are seeking lower operating costs.

Asia Pacific countries continue to dominate the top 10, occupying seven places within the top half of the Established Index, with Malaysia retaining its position as the most attractive market for locating manufacturing facilities. Costa Rica has risen four places since last year to top the Pioneering Index table, as it continues to witness increasing growth through rising levels of foreign direct investment, in both advanced and light manufacturing options.

The European market overall has remained relatively stable in the past 12 months, according to the report. Going forward, the implications on tariffs and trade as a result of the UK’s decision to leave the European Union will be an important challenge for the manufacturing sector. The weakening of sterling has held up the sluggish market in the UK itself and as yet there is no prospect of modern production facilities being relocated or closed purely due to the result of the Brexit vote.

Looking at the market as a whole, the report states that in the short term, manufacturing remains partly constrained by a lack of capital investment in plants, reducing near-term radical shifts in location decisions. However, in the medium term, many questions will be raised about locations that fundamentally service a different era as the sector migrates into what management consultancy McKinsey has called Industry 4.0, which places a greater emphasis on emerging technologies. As a result of the findings from this report Cushman & Wakefield anticipates different criteria becoming more important to future decision making.

“While macro events such as Brexit and the U.S. Presidential election result carry risks in terms of regulation and market access, disruptive technologies such as additive manufacturing and Robotic Process Automation also continue to transform the manufacturing world by reshaping the production cycle in the longer term,” said Neil McLocklin, Partner, Strategic Consulting at Cushman & Wakefield.

“In a period of accelerating change and digital transformation, pure cost-reduction strategies are being challenged,” said Simon O’Reilly, International Partner, Enterprise & Portfolio Solutions EMEA at Cushman & Wakefield. “Companies are increasingly honing in on those activities with the greatest potential for creating value and identifying the talent that will enable them to create it. Therefore, in terms of location, there will likely be a polarization in the production process between innovation, design and development on the one hand locating to high-cost locations, while pure production and assembly remain much more cost sensitive.”

Both the U.S. and Canada secured placements within the report’s top 10. Even prior to Donald Trump’s election, there was evidence of a resurgence in manufacturing, in part due to some re-shoring initiatives but also due to a shift in focus to the higher value end of the production process. While the new president is committed to bringing manufacturing jobs back to the U.S., how this will be managed on any significant scale without increasing the costs of production will be a question the industry is asking.

The impact of Brexit has remained non-threatening for the time being. The prospectus for 2016 was looking relatively subdued with sluggish growth in key European markets, weak commodity prices and emergency market wobbles. However, the market has since been held up by the weakening pound and prospects for 2017 are looking better. While the German market has traditionally been famous for its engineering, a number of central and eastern European countries such as Hungary, Sweden and the Czech Republic remain in the top 10 due to their manufacturing components and ability to provide cheaper alternative assembly options. Location continues to remain significant in this sector, and there is no sign of modern production facilities being relocated or closed purely become of Brexit, but future UK Government decisions could make a difference.

Asia Pacific continues to demonstrate its diversity as a location of choice for manufacturers, occupying almost half of the positions within the top 15 of the Established Manufacturing Index. Given the varying maturing level of technology adoption and priorities across Asia Pacific, each country in the region has a specific focus on areas of innovation to promote sector growth. This includes smart manufacturing in the form of automation in Chain due to wage inflation, or the offer of a connected society and strong conditions for doing business in Singapore, despite a higher cost profile.

For a full copy of the report, click here.