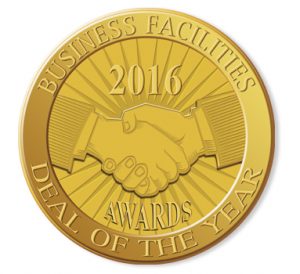 The Continental Tire facility is a $1.45 billion investment that will directly create 2,500 new jobs over the next decade. The project also will create 2,740 indirect and 1,013 induced jobs during the same period, generating more than $1.3 billion in overall economic impact for the Greater Jackson region.

“Mississippi executed an impressive double play early in 2016 by winning the highly coveted Continental plant and simultaneously landing the new TopShip shipbuilding complex in Gulfport,” BF Editor in Chief Jack Rogers said. “The Magnolia State had a banner year — and we fully expect that its dynamic and well-executed growth strategy will produce even greater success in 2017.”

MDA’s team, which included Hinds County Economic Development Authority, Greater Jackson Partnernship/Alliance, the City of Clinton and utilities Atmos Energy and Entergy, had to overcome a series of challenges during the two-year negotiation to seal the deal on what it called “Project Potter.” These included the discovery of an abandoned graveyard on the proposed site; wetlands mitigation; the execution of a plan to transfer education trust land to the company (in exchange for land donated to the school system by Continental); and the approval by the Mississippi State Legislature of a $265-million incentives package for the project.

Approximately 270 marked and unmarked burial plots were relocated to nearby Bolton Cemetery, a process that included a full archeological survey and the excavation of artifacts as well as remains. To expedite permitting for the project, Gov. Phil Bryant personally filed the necessary wetlands mitigation permits. Continental also was given access to the region’s community college system, which worked with the company to develop a customized workforce-training program for the project.

Mississippi is counting on the Continental plant to replicate the success story in nearby Canton, MS, where Nissan North America opened a vehicle assembly facility in 2003, which now employs more than 6,400 workers and has indirectly created nearly 25,000 jobs.

“Nissan’s commitment to Mississippi helped draw a number of prime players to the area, including Toyota, Yokohama, PACCAR and Airbus Helicopters,” Rogers noted. “With industry giants like Continental lining up behind the state’s already impressive vehicle assembly facilities, Mississippi is accelerating into the top tier of U.S. auto industry manufacturing hubs.”

The Silver Award in BF‘s annual Deal of the Year contest went to the Tennessee Department of Economic and Community Development for General Motors’ $789 million expansion of its plant in Spring Hill, TN, a project that will have an estimated economic impact for the region of $3 billion over the next 10 years.

“GM’s decision to put a new high-efficiency engine program and modernize vehicle programs at Spring Hill is a strong indicator that Tennessee can compete with anyone as an automotive powerhouse,” Rogers said.

The Georgia Department of Economic Development snared our Bronze Award for Honeywell’s new software development center in Atlanta. The development center, which will create 833 new jobs, also will serve as the headquarters for Honeywell’s $9.4 billion Home and Building Technologies (HBT) business.  The project is expected to have an overall economic impact of more than $183 million in 2020, when the center reaches full employment.

The new software development center in Atlanta will create leading-edge software based on the latest Cloud, Mobility and Analytics technology. “Atlanta offers us access to some of the brightest and most-innovative software talent in the U.S.,” said Krishna Mikkilineni, Honeywell senior vice president of engineering, operations and IT.

BF‘s blue-ribbon panel of Deal of the Year judges also selected seven projects to receive Honorable Mention Awards in the 2016 competition, including:

Business Facilities, a national publication that is the leading location source for corporate site selectors and economic development professionals, will be celebrating its 50th anniversary with the publication of our upcoming January/February 2017 issue.