Our hearts go out to all of the people in Greater Houston and the Gulf Coast region of southeast Texas and southwest Louisiana who are coping with the worst flooding disaster in U.S. history, an estimated 25 trillion gallons of rainwater dumped during the weeklong onslaught of Hurricane Harvey. 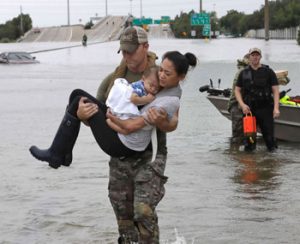 To put that in perspective, the entire Chesapeake Bay contains an estimated 18 trillion gallons of water. In a handful of days, Houston was inundated with more rain than the city normally gets in an entire year, covering neighborhoods and roads with more than four feet of water. The deluge forced city officials to add to the misery by opening the spillways of one of the city’s largest reservoirs to keep it from overflowing and breaching an earthen dam.

The images that have been beamed around the world from Houston have been a torrent of scenes of tragic desperation. A photo of elderly residents at an assisted-living facility sitting in waste-deep water waiting patiently for evacuation was an unforgettable coda for the catastrophe that enveloped the nation’s fourth-largest city, a sprawling metro area that is as large as the entire state of Connecticut and home to 5 million residents.

Interspersed with the heartrending sight of people trapped on rooftops or wading through chest-deep water carrying children and pets were the heroic images of people risking their lives to save them. The nation’s worst natural disaster brought out the best of human nature in Houston.

The first responders and rescue squads were relentless, working 48-hour shifts on the water in boats and rafts and anything on wheels high enough to ford the flood and reach people in need. They navigated through deadly currents and sudden surges of waves generated by the deluge (a police officer perished in his squad car under a highway overpass). They waded in on foot, carrying people out in their arms and on their backs. Ignoring the perils of 40 mph winds that usually mandate the grounding of all aircraft, courageous helicopter pilots swooped low over rooftops and hovered precariously as stranded residents climbed into baskets and were lifted into the safe haven of the choppers.

Augmenting the trained professionals responding to the disaster were the people of the city, who gave the world a Texas-sized display of brotherly love, courage and creativity in the face of life-threatening danger. Long after the floodwaters recede and the rebuilding has begun, we’ll remember the images of ordinary people who did extraordinary things in this unprecedented crisis. 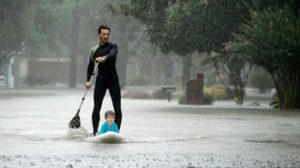 They waded without hesitation into the rising water and formed human chains, surrounding a woman who was nine months pregnant (they gently lifted her into a dump truck that delivered her to a hospital) and pulling a man out of an SUV that was about to be swept under the waves on a road that had become a river. They carried those weaker than themselves to higher ground and turned anything that could float into a means of escape, including surfboards and jet skis.

As Houston’s official shelter at the George R. Brown Convention Center quickly filled beyond capacity, local businesses stepped up to offer their space, including a furniture store that filled its showroom with mattresses and opened its doors to people whose homes had been destroyed by the storm.

We also want to tip our hat to the reinforcements from all over the U.S. who rushed to join the legion of first responders in Texas. When the scope of Hurricane Harvey’s wrath became apparent in the first hours after the storm made landfall near Corpus Christi, rescue squads from as far away as New York City and dozens of other locations throughout the nation grabbed their gear and made a beeline for Houston.

In the midst of the unfolding calamity in Texas and Louisiana, a national conversation has begun about the steps that must be taken to deal with the growing threat of widespread flooding that unfortunately is becoming the new normal in the era of climate change. The discussion initially has focused on disaster preparedness and response, but it is quickly expanding to encompass the need to rethink the planning process for development in coastal regions (and, most controversial of all, whether every structure that has been destroyed by a storm should be rebuilt in the same place).

That’s a debate we all need to have (and one we’ll join in upcoming posts), but this week our undivided attention is on the human toll of the catastrophe in Greater Houston. Our hearts go out to the victims; words are not sufficient to express our gratitude to the heroes who met this monumental challenge with courage and kindness. We may never know all of their names, but we’ll never forget what they did.

Our thoughts and prayers are with the folks in Texas and Louisiana today. We urge everyone who can to donate whatever they can spare to one of the numerous relief funds (including the groups listed below) that are channeling aid to those who desperately need it.