We’ve never had a reason to rank the states in terms of the percentage of public land owned by the federal government within their borders, but a fight that’s developing over a new national monument in Utah soon may focus intense interest on that benchmark. 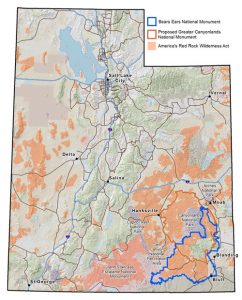 For more than a century, the federal government has taken public ownership of hundreds of millions of acres of wide-open spaces, primarily in the Western U.S. and Alaska. Ever since President Theodore Roosevelt signed the Antiquities Act of 1906, Roosevelt and each of his successors have been empowered to establish with a stroke of their pen new national parks and monuments that are off-limits to private development.

Teddy cemented his well-earned reputation as America’s greatest conservationist by invoking the Antiquities Act at least 18 times over a three-year period; he established 230 million acres of public land, protecting national treasures like the Grand Canyon and Muir Woods. Only three presidents since 1906 have resisted the temptation to use their power to redraw the federal map: Nixon, Reagan and George H.W. Bush (although Nixon created his own monument of disgrace by establishing public ownership of his secret tape recordings).

President Obama set a new record—265 million acres—but only if you measure the conservation crown by water as well as land (257 million acres of Obama’s legacy came from one designation, the Pacific Remote Islands National Monument, which are tiny dots in hundreds of square miles of protected ocean sanctuaries on the other side of the world).

With the dawning of the atomic age at the end of World War II, the U.S. government dramatically expanded its other primary prerequisite for seizing land from the states: the need to use wide-open spaces to test weapons systems like missiles, tanks and advanced aircraft, and to house sprawling military facilities. Large swaths of the Nevada desert, including the infamous Area 51 (sorry, but Elvis is not in the building, conspiracy fans), are under the control of the Pentagon. 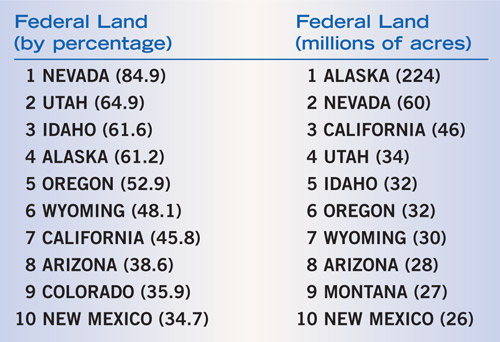 You won’t see this in BF‘s upcoming Rankings Report, but at right are the top 10 states for federally owned land (by percentage and overall acreage).

Which brings us to Bears Ears.

Perhaps realizing that his conservation legacy was a bit waterlogged, Obama decided to authorize a whopping 1.3-million-acre federal land grab in his final days in office. On December 28, he created the Bears Ears National Monument in the southeastern corner of Utah. The 2,000 square miles of Bears Ears, home to nearly 100,000 archeological sites, now is the largest national monument in the Beehive State, which is full of them.

The nation’s newest monument is a huge canyon region of red rocks which gets its moniker from the twin peaks that loom over everything else in the area. The two promontories have flat tops, known in the local parlance as buttes (resembling the mountain an obsessed Richard Dreyfus carved out of his mashed potatoes in Close Encounters of the Third Kind). Viewed against the horizon at sunset, they sort of look like bears’ ears, at least to the Native Americans who named them.

State and local officials in Utah, as well as major energy and mining industry players, have been bristling for decades about the fact that almost two-thirds of UT is untouchable for economic development. Geologists believe that a bounty of natural resources lies under the surface in Utah, including oil, natural gas, geothermal energy and valuable ores and minerals. Farmers also have been queuing up for grazing rights.

Obama’s overreach on the size of the Bears Ears Monument ultimately may be remembered as the tipping point that brought the argument over public lands to the forefront in Utah, and not just because state officials and industry lobbyists have long been itching to make, well, a federal case out of this. The folks in Utah now have some powerful allies on their side, allies that may be able to reverse decades of federal policy driving the expansion of public lands: President Trump and Interior Secretary Ryan Zinke.

Zinke, a former congressman from Montana, has declared his intention to review the Bear Ears Monument designation and redraw its boundaries. Early signals indicate that this action won’t be restricted to the minimalist tweaking that resulted from previous reviews of national monument designations. We may be about to find out if the president, who like any president has the power to create vast public monuments simply by signing an Executive Order, also has the power in his pen to rescind any of the monuments designated by one of his predecessors.

The implications of this are likely to be much greater than Zinke’s action on Bear Ears or whether Utah gets to recoup and develop some of the public land in its domain. If the Bear Ears Monument designation is rescinded (or reduced to the size of the baby bruins on the Cubs’ uniforms), it will be open season on every protected monument or national park in the U.S., including the mountain in South Dakota with Teddy Roosevelt’s visage carved into its face (anyone want to buy some advertising space on a billboard hanging from TR’s moustache?).

The precedent that may be set by the kerfuffle in Utah also will spawn a legal challenge from environmentalists, Native Americans and others that eventually will have to be settled by the U.S. Supreme Court, which heretofore hasn’t shown any hesitation in chucking out practices that have become established law for decades (like voting rights and campaign finance laws).

It will indeed be a landmark decision, in every sense of the word.