For the third year in a row, California is the highest-ranked state when it comes to moving toward a modernized power grid, according to the 3rd Annual Grid Modernization Index (GMI). Published by the GridWise Alliance in collaboration with Clean Edge, Inc., the GMI ranks and assesses all 50 states and the District of Columbia based upon the degree to which they have moved toward a modernized electric grid. 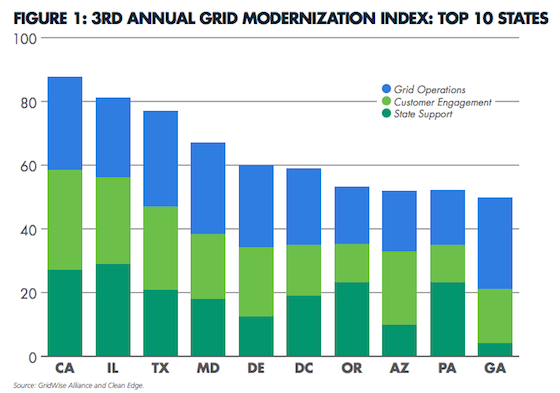 California, with a score of 88, ranks first in the Customer Engagement category (as it did in the previous GMI), and second in both State Support and Grid Operations. California has a nearly seven-point lead over second-place Illinois, while Texas (which was neck and neck with California for the top score in the previous GMI) ranks third.

Maryland and Delaware (leaders on the East Coast) each move up a spot to fourth and fifth respectively. Rounding out the top 10 are Washington, DC; Oregon; Arizona; Pennsylvania; and Georgia.

“Electricity lies at the heart of our economy, and it must evolve to serve the needs of an increasingly low-carbon, always-on, digital economy,” said Steve Hauser, CEO of the GridWise Alliance. “We are pleased to see continued progress across the country this year, but the survey shows that we are just getting started.”

Based on survey data collected in June-October 2015, the Index benchmarks states on a wide range of grid modernization policies, investments, and activities, and provides insights into some of the relationships and connections between state policies and regulations, customer engagement, and utility investments in modernizing the grid. This year’s Index shows once again that most of the activity is focused in a few states, although nearly all states have begun to address these issues.

“These changes are difficult for policymakers,” said Scott Prochazka, CEO of Centerpoint Energy and Chairman of the GridWise Alliance. “It’s critical to ensure that the public good is served while enabling individual rights and choices. The findings from this GMI study do an excellent job of guiding the industry on critical investments that must be made.”

A number of major grid-related developments highlighted in this year’s summary report include:

The Index report covers many other developments at the state and federal level, and offers Six Key Takeaways, providing lessons and best practices for a rapidly modernizing grid. Takeaways include the fact that continuing to fund grid modernization investments is a challenge for many states; that some key factors associated with high GMI scores are advanced metering infrastructure (AMI) penetration, electric market deregulation, and the presence of demand response programs; and that the source of leadership for grid modernization efforts (executive branch, legislators, regulators, etc.) varies widely from state to state.