Saxo Bank, the online trading and investment company,  has released its annual set of “Outrageous Predictions” for the year ahead. These are 10 unlikely events, even if their risk is under-appreciated, that would have significant consequences for global markets should they come to pass.

This year’s predictions include the notion of a UK exit from the EU after a landslide gain by the UK Independence Party in the country’s general election. Other outrageous predictions include Mario Draghi quitting the European Central Bank to become Italian president, a UK housing market crash, and the eruption of Icelandic volcano Bardarbunga, which could cancel Europe’s summer in 2015.

“Inflation has fallen to its lowest in decades, interest rates have followed and energy prices are sharply lower. The lack of volatility in data and in asset markets has given investors a false sense of security and that could lead to the biggest upset in 2015. We saw a possible preview of coming attractions during one week of mayhem in October of 2014. If that’s anything to go by, we are in for a rollercoaster ride in 2015.

“Saxo Bank’s Outrageous Predictions remain an exercise in finding 10 relatively controversial and unrelated ideas which could turn the investment world upside down. By imagining the most negative scenarios and events, whether a Russian default, volcanoes spreading havoc, or an Internet Armageddon, investors have a chance to stress test their assumptions about the future and what these events might mean for their own investments. We must remember that while the predictions outline rather extreme market scenarios, over the years, a number of them have unfortunately come true.”

Surveys are already showing that momentum is quickly leaving the UK housing market, particularly in London. The impending Bank of England rate hike will see the UK suffer a housing crash with prices falling as much as 25% in 2015.

Incessant Bank of Japan money printing crushes confidence in the yen as Kuroda-san finds that his policy to bring inflation back to his country is met with too much “success”—a symptom of Japan losing control of its currency.

China will be looking for any way it can to ease the enormous deflationary pressures that are the downside of a credit boom. As deflationary risks loom, China tears a page from the BoJ policy playbook and moves to devalue the yuan by 20%, joining Japan in its fight to import inflation and demand.

To bring the Germans fully on board with the European Central Bank’s move to QE, Draghi steps aside to allow for full ECB quantitative easing to proceed under a new president, Jens Weidmann of the Bundesbank. Draghi sees greater opportunity for his skills in Italy, where President Napolitano requests that he succeed him.

Plunging oil prices and a cold financial shoulder from Russia’s geopolitical antagonists see large Russian companies or the government itself defaulting on foreign debt. A default, like in 1998, is what is needed to secure the country’s future, together with a diplomatic solution on the Ukraine question.

In 2015, new attacks on e-commerce’s largest players become even more widespread and aggressive, sending shockwaves through the Web and cloud service providers. Amazon.com, the largest e-commerce retailer and dominant player in Web-based services, suffers a decline of 50% on the widespread fallout to the e-commerce industry and also because of its overvaluation.

Like the volcano Laki in the year 1783, the already active Icelandic volcano Bardarbunga erupts in 2015, leading to a massive release of noxious sulphur dioxide and other gases that cloud the skies over Europe. The eruption shifts weather patterns and brings fears of a weak harvest across Europe, with grain prices doubling even as the volcano’s fallout proves more modest than feared. 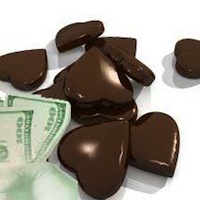 Demand for chocolate is rising globally as Western preferences shift towards darker chocolate and Asian appetite increases. With supply affected by concerns over the Ebola virus and underinvestment in key West African production regions, the world is consuming far more cocoa than it is producing. This leads to a record high price for cocoa above USD 5,000 per tonne in 2015.

9. UK seen leaning toward 2017 exit from the EU (Brexit) on UKIP election landslide

The UK Independence Party (UKIP) wins 25% of the national vote in Britain’s general election on May 7, 2015, sensationally becoming the third largest party in parliament. UKIP joins David Cameron’s Conservatives in a coalition government and calls for the planned referendum on Britain’s membership of the EU in 2017. UK government debt suffers a sharp rise in yields.

After a sentiment shift on high yield bonds, investors heading for the exits in 2015 discover sparse liquidity and steep price declines. With an ultimate washout in high-yield credit, shock waves will once again shake the foundations of Europe’s weak economy. The Markit iTraxx Europe Crossover doubles to 700 basis points in 2015.