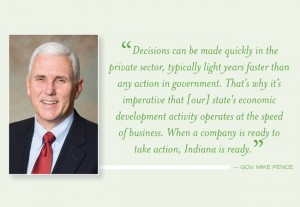 Gov. Mike Pence recently announced that Indiana will develop its first State Performance and Data Analytics Tool. In an exclusive Governor’s Report interview with BF, the governor explained how this tool will be deployed to increase the effectiveness of the Hoosier State’s economic development programs.

“In order to provide the most efficient and effective state services possible, it’s crucial that Indiana works at the speed of business,” Gov. Pence told us. “Data analytics tools like this are commonplace in the private sector, and this new resource in our tool belt will help us transform and streamline the way Indiana tackles challenges across agencies, delivering smarter, lower-cost services to taxpayers.”

Transparency will not be sacrificed in the name of efficiency. Indiana is one of seven states that were chosen to participate in the Pew/CREC Business Incentives Initiative, which will identify best practices for economic development incentives. Gov. Pence has made it a priority to ensure that taxpayers are getting the maximum value for incentive investments.

“Hoosiers have a right to know where their tax dollars are being spent,” Pence says. “Our administration, emboldened by the leadership at the Indiana Economic Development Corporation (IEDC), has advanced the transparency of public investments and outcomes with the creation of an online portal providing information in a format that is accessible and easy to understand.”

The governor proudly notes that the U.S. Public Interest Research Group, a Washington, D.C.-based watchdog organization, ranked Indiana first in the nation for government spending transparency in April, specifically noting the IEDC’s transparency portal as a model for other states.

“Through assessing the data we’re reviewing on the performance of incentive programs and developing best practices, this project will help ensure our administration has the best available information to craft policies,” Pence adds. “We’re delighted with this opportunity to partner with Pew, building upon our work to bolster the world’s best business environment here in Indiana.”

Since taking office in 2013, Gov. Pence has been on a mission—literally and figuratively—to attract foreign direct investment to Indiana.

Last year, Pence led a trade mission to Japan and had more than 20 meetings with top execs from Japan’s industrial giants. Japan is Indiana’s largest Asian trading partner; the state hosts the operations of three Japanese automotive OEMs—Toyota, Honda and Subaru, and more than 200 Japan-based business facilities are already operating (and growing) in Indiana.

“During our jobs mission to Japan it was clear that Japanese excitement and optimism in Indiana is on the rise,” Pence told us.

Two recent expansion announcements were directly connected to the governor’s tour of Japan: Pence met Shinichi Iizuka, CEO of TOA (USA) and president of its parent company, TOA Industries; TOA is expanding its operations in Mooresville, IN, investing $72.1 million and creating up to 220 new jobs. He also met with Kanshiro Toyoda and Fumio Fujimori, chairman and president, respectively of the conglomerate Aisin; Aisin’s U.S. subsidiaries (Aisin Chemical Indiana and Aisin Drivetrain) this month announced plans to expand their Crothersville, IN operations, creating up to 74 new jobs.

A few weeks ago, Gov. Pence crossed the Atlantic to meet with business leaders in Germany, Indiana’s third-largest source of foreign direct investment (more than 100 German companies are operating in Indiana, bringing 12,500 jobs with them).

“With a high density in manufacturing, several of the companies we met with announced their Indiana growth plans while we were touring their German production floors,” Pence says.

Among those signaling expansions in Indiana were industrial hose producer NORRES, extrusion manufacturer Jaeger-Unitek Sealing Solutions and medical tech firm DOT America. “Because we share similar industries, German companies know that they can find the workforce and supplier base they need in Indiana,” the governor told us, adding that he’s confident there will be a surge of German FDI into Indiana that will match what he calls the current “domino effect” of Japanese OEM investment, which has drawn a robust supplier network and created thousands of jobs in the Hoosier State.

Site selectors have identified the availability of a skilled workforce as a top priority. So Gov. Pence has been busy expanding Indiana’s workforce training offerings.

“A strong, knowledgeable workforce is a key factor in site selection decisions, making it a priority for us in Indiana,” Pence says. “Last year, we worked with the General Assembly to pass bipartisan legislation to establish our Indiana Works and Career Councils. They are charged with improving learning outcomes for Hoosier students and adults by connecting workforce training to the needs of Hoosier employers. In Indiana, we are transforming workforce development at both the state and local levels, preparing students for jobs in their community and ensuring that employer demand is met.”

Job One for Gov. Pence is ensuring that Indiana continues to have a productive, pro-business environment, which he credits to “smart policies, reasonable regulation and a strong infrastructure.” Last year, Pence pushed through the largest state tax cut in Indiana history, with more than $600 million in tax cuts scheduled annually through 2021. Through cuts to the state income tax, inheritance tax and other business tax reductions, Indiana is the only state in the country to achieve more than $1 billion in tax cuts over the next two years, Pence says.

Pence proudly notes that his state has maintained its triple-A bond rating, which he calls the “product of responsible budgeting.” Cutting red tape for new business also was established as a priority by Pence minutes after he took the oath of office.

“On my first day in office, I signed an executive order placing a moratorium on any new burdensome regulations,” Pence told us. “This is improving operations across state government, promoting efficiencies and better taxpayer services.”

“Indiana is a right-to-work state,” he adds. [This gives] businesses the flexibility to respond more effectively to the needs of the marketplace and workers the freedom to decide individually if they will financially support a union.”

All of the above were cited by the governor as key factors propelling Indiana to national leadership in manufacturing job growth.

“Decisions can be made quickly in the private sector, typically light years faster than any action in government,” he told BF. “That’s why it is imperative that a state’s economic development activity operates at the speed of business and it’s precisely why the IEDC was created in 2005. When a company is ready to take action, Indiana is ready.”

Gov. Pence says that by working directly with a strong group of partners and stakeholders, the IEDC has “distinguished Indiana’s corporate landscape and culture from the rest of the pack.”

“In Indiana, companies find the resources and efficient processes they need to grow and thrive,” Pence says. “We’re broadcasting Indiana’s story on the world stage, letting companies large and small know what Hoosier businesses already know—that Indiana has a low-cost, business-friendly climate with a talented workforce.”