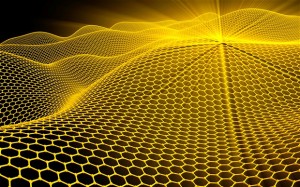 Never heard of graphene? Well, you’d better get up to speed quickly because this molecular miracle gleaned from inexpensive graphite is poised to revolutionize just about every product we make and use in our everyday lives.

Several major enterprises are gearing up to commercialize the ultra-flexible, super-strong wonder in a breathtaking range of applications, from paper-thin smartphones that wrap around your wrist to microscopic sensors that can internally scan your nervous system, and, eventually, to jet aircraft and cars.

Graphene has fascinated scientists for decades, with early experiments including rudimentary efforts to pull single carbon atoms from graphite (the stuff in pencils) using scotch tape.

A hexagonal honeycomb lattice of carbon atoms arranged in a microscopic, two-dimensional layer, graphene is thin enough to stretch over 28 football fields, according to a study by the American Chemical Society. But supreme flexibility is not the most astounding attribute of graphene: the ultra-thin material is said to be 200 times stronger than steel; it’s 20 times stronger–and six times lighter–than the strongest natural material on Earth, diamond.

Graphene also is water-resistant and virtually transparent, but its remarkable powers don’t stop there. The material is said to be an excellent conductor of heat and electricity — a graphene/silicon battery created by researchers at Northwestern University reportedly took only 15 minutes to charge and held a single charge for more than a week. And scientists say the molecular wonder can safely interact with biological systems, like plants and humans.

The potential applications are too numerous to list in this space, from unbreakable, flexible touchscreens for your favorite devices to medical marvels that heretofore have only existed in Fantastic Voyage-type science fiction, and just about everything in between.

In 1962, Dr. Hanns-Peter Boehm, a German chemist, coined the term graphene–applying the common chemical suffix -ene to graphite–in a research paper describing single-layer carbon foils. The first graphene materials emerged in 1987 when graphene sheets were integrated into crystalline compounds and the material was studied in early research on carbon nanotubes.

The big breakthrough occurred in 2004, when researchers in the U.K. working on carbon nanotubes discovered that high-quality graphene could be isolated using a relatively easy chemical process. In 2010, Andre Gelm and Konstantin Novoselov of the University of Manchester won the Nobel Prize for Physics for their experiments with two-dimensional graphene.

The race is on to mass-produce graphene (with a process known as chemical vapor disposition, which isolates the atoms from graphite) and use it in commercial applications. Several major mining companies are making investments in graphene; equipment producers are lining up to grab their share of what is expected to be a huge market for processing equipment.

The biggest push in the graphene revolution is coming from electronic device makers. This week, Samsung announced a breakthrough in graphene manufacturing the company says will enable it to use the material in its mobile devices, “wearable” technology and flexible displays.

Samsung revealed in a blog post that the Samsung Advanced Institute of Technology, in collaboration with Sungkyunkwan University, has developed a synthesis method to produce graphene that can be used in electronic semiconductors. Samsung says its method can create high-quality graphene embedded in silicon wafers, which may pave the way for the mass production of graphene transistors. The discovery promises to “unlock the next era of consumer electronics technology,” Samsung says.

Researchers at IBM, Nokia and SanDisk have been experimenting with graphene (some of it chemically “grown” on germanium) to create sensors, transistors and memory storage units. According to reports, engineers at IBM Research have built the most advanced graphene-based chip, said to offer performance “10,000 times better” than previous graphene ICs, using a method compatible with standard silicon CMOS processes. Apple reportedly has developed at least six iPhone prototypes using graphene.

The lightweight super material is expected to revolutionize heavy manufacturing as well as electronics. Major carmakers are exploring the feasibility of replacing steel on vehicles with graphene. The aerospace industry, already in the process of integrating lightweight carbon-fiber composites into airframes and wings, views graphene as a logical successor material.

Researchers at Columbia University say products containing graphene can stretch by 20 percent, which makes it ideal for everyday household items that require flexibility. For example, the Bill and Melinda Gates Foundation has donated $100,000 to fund the development of graphene prophylatics, which gives new meaning to the wonder material’s “rubberlike” qualities.

While the commercial free-for-all to bring graphene products to market unfolds, a predictable geopolitical scrum over the raw materials for graphene also may be developing.

Half of the world’s graphite deposits are in China. The Chinese government in recent years has reserved “for domestic use” increasing quantities of rare earth metals like tungsten and molybdenum (critical for a variety of aerospace components). The PRC is indicating it may take the same approach with graphite.

We suggest everyone save any old pencils lying around in desk drawers. There’s black gold in those chewed-up stubs.