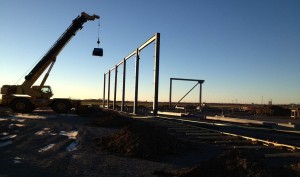 “GTA’s permanent manufacturing home in Tunica has been taking shape on the ground level for several months now, and we’re looking forward to seeing the structure itself rise up in the coming weeks,” said Charles Wang, chairman and CEO of GTA. “As GTA continues to make significant progress toward our engineering, production and hiring goals, we’re eager to move into the new facility when construction is complete this spring.”

Structural steel work began January 6 and will continue through mid-February. Exterior walls will go up beginning in early February. GTA expects the entire exterior structure, including walls and roof, will be completed by the middle of March, allowing for the company to begin moving its production capability into the new facility.