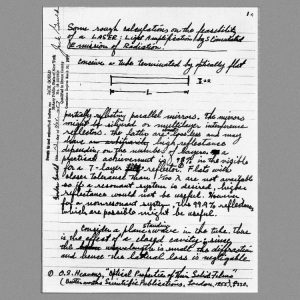 Jerome Lemelson and Gordon Gould were both born in New York City in the early 1920s. We don’t know if they ever met, but their life stories followed similar trajectories.

Even as a child, it was clear Lemelson had what it took to become one of the most prolific inventors in history. Barely out of knickers, he invented a lighted tongue depressor for his father (who was a doctor) and ran a gas-powered model airplane business out of his parents’ basement. By the time he died in 2005, Lemelson held more than 600 U.S. patents, fifth on the all-time list (number one is–no-brainer alert–Thomas Edison).

In patent applications filed in the 1950s, Lemelson described robots that could perform industrial duties including riveting, quality inspection, measuring and welding. He envisioned a “flexible manufacturing system” involving machines with built-in cameras and “machine vision” — the ability to analyze and respond to what the robot “sees” in this digitized imagery.

Later in life, Lemelson specialized in what came to be known as the “submarine” approach to patent enforcement. Although he didn’t actually build many of the computer-driven machines and manufacturing systems his patents envisioned, Lemelson would wait until those systems were widely in use and then file a broadly written patent infringement claim against those using them. According to one of his former attorneys, Lemelson was uncanny at figuring out where an industry was headed and then placing a patent claim directly in its path. “In many cases, Lemelson didn’t patent inventions, he invented patents,” the lawyer told an interviewer.

In the mid-1980s, for example, Lemelson roiled the entire machine tool industry when he claimed that the heart of computer-integrated manufacturing–the idea of using computerized controls to run metalworking equipment–stemmed from his original theories in the ’50s. Lemelson’s relentless barrage of patent claims netted him more than 700 licenses from some of the biggest manufacturers in the world, including Alcoa, Boeing, Dow Chemical, GE, Ford, GM and U.S. Steel. He earned nearly $2 billion in royalties by the time he passed away.

Gordon Gould, a physicist who died in 1997, is now widely recognized as one of the first inventors of the laser. But it was only after a 30-year-long battle that he earned that recognition.

In 1957, Gould came up with the idea of deploying two mirrors as an optical resonator that could amplify light and direct it into a narrow, coherent, intense beam. He jotted down his findings in a spiral notebook, coining the famous acronym for his process of Light Amplification by Stimulated Emission of Radiation–L.A.S.E.R.

Gould immediately shared his theory with a fellow professor at Columbia University, Charles Townes. Seven years later, Gould had to sit in the audience and watch as Townes stepped up to accept the Nobel Prize for his work on the maser and the laser. Many in the scientific community snickered when Gould produced his spiral notebook–which he had taken to a candy store in his New York City neighborhood in 1957 and had notarized–and filed his claim as an inventor of the laser. They called him “the candy-store scientist.”

They stopped laughing in the late 1970s, when Gould sold two-thirds of his anticipated royalties to a small California company named Patlex which had agreed to finance patent litigation on his behalf aimed at broadly enforcing Gould’s claims against just about every laser manufacturer (Gould’s first patent was upheld in 1977). Patlex caused an uproar at the Pentagon in the mid-1980’s when it started buying up small Israeli defense contractors involved in laser development. Ten years after it began its partnership with Gould (who joined the company as its chief scientist, along with astronaut Frank Borman, who became its chairman and CEO), Patlex started winning some huge settlements and licensing deals. Gould is estimated to have earned at least $30 million in royalties.

Lemelson and Gould come to mind this week as the Obama Administration and Congress are trying to fix a 2011 change they made to U.S. patent laws which apparently has had unintended consequences. The America Invents Act, signed into law by President Obama, was intended to make it illegal to file a single lawsuit claiming a huge group of defendants had infringed on a patent in the same way–the kind of “submarine” attack that was Mr. Lemelson’s specialty.

The law appears to have backfired, giving rise to a cottage industry of shell companies that exist simply to file robo-lawsuits alleging that patents they have acquired are being infringed by any company deploying widely used software or electronic processes. These fly-by-night outfits–known in the legal community as “patent trolls”–have unleashed a plague of patent lawsuits since the 2011 law was enacted. Last year, they are said to have accounted for more than half of the 4,000 patent infringement suits filed in the United States.

The New York Times reports that one of these companies threatened to sue about 8,000 coffee shops, hotels and retailers claiming a patent infringement because they set up Wi-Fi networks for their customers. Another is claiming that hundreds of small businesses violated its patents by attaching a document scanner to their office computer system.

President Obama has ordered the Patent and Trademark Office to require companies to be more specific about exactly what their patent covers and how it is being infringed. The president also told the Patent Office to tighten scrutiny of overly broad patent claims; he said it should aim to curb patent-infringement lawsuits against consumers and small business owners who are using off-the-shelf technology.

We’ll see how that works out. We’re going to take a wild guess here and assume the president didn’t suggest that U.S. patent regulators seek guidance from the IRS on how to enforce their new responsibilities.

Memo to Al Gore: hold off on the Internet infringement claim. By the way, did we ever tell you we invented the chocolate eggcream in 1957?