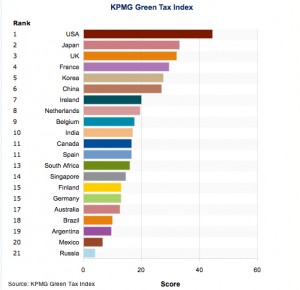 The United States ranked first among 21 countries most actively using the tax code to influence sustainable corporate activity, according to the inaugural edition of the KPMG Green Tax Index, reflecting the country’s extensive and long-established program of federal tax incentives for energy generally, including specific incentives for energy efficiency, renewable energy and green buildings.

Japan, the United Kingdom, France, South Korea and China were also among the leading countries using tax as a tool to drive sustainable corporate behavior, according to the index. Key policy areas explored in the index include energy efficiency, water efficiency, carbon emissions, green innovations and green buildings.

“The KPMG Green Tax Index provides important directional insight for corporate sustainability decision makers, CFOs and board members into how countries are using taxes to influence corporate behavior,” said John Gimigliano, principal-in-charge of sustainability tax in the Washington National Tax practice of KPMG LLP. “Japan, for example, tops the rankings in its promotion of tax incentives for green vehicle production, while the United States favors a comprehensive system of renewable energy tax incentives. As a result, we’re seeing more green cars coming out of Japan and dramatic growth in the U.S. renewable sector.”

“These activity-based rankings can be of value to corporate sustainability decision-makers as they allocate budgets and evaluate investments around the world,” said John Hickox, advisory partner and U.S. practice leader for Climate Change & Sustainability Services at KPMG LLP.

The KPMG index identified over 200 individual tax incentives and penalties of relevance to corporate sustainability. At least 30 of these have been introduced since January 2011, reflecting the quickening pace of green investment globally.

According to the KPMG Green Tax Index, the U.S. tax code provides a range of tax credits, including a production tax credit on renewable energy and tax incentives construction of efficient buildings.

“The KPMG Green Tax Index demonstrates how important it is for corporations to make sure their head of sustainability and their head of tax are talking,” said KPMG’s Gimigliano. “At many companies these functions may have never met. One critical lesson from the Green Tax Index is that for companies to enhance the return from its green spend, the tax and sustainability functions should collaborate before the investment decision is made.”

“The very investments that can drive change and secure competitive advantage may never be made if green tax systems are not fully understood and used,” said KPMG’s Gimigliano. “Investments that struggle to make a case on a pre-tax basis can flourish after green tax analysis. Companies should not underestimate the potential of green tax incentives to deliver efficiency and productivity benefits, drive innovation and contribute to the bottom line.”

The KPMG Green Tax Index focuses on 21 major economies around the world that KPMG International believes represent a major share of global corporate investment activity. A high ranking in the Index does not necessarily mean that a country is “greener” than others. It means that the government is more active than others in using the tax system as a tool to influence corporate behavior and achieve green policy goals.

A lower ranking does not mean that a government has no green tax or incentive instruments in place. Every nation listed on the KPMG Green Tax Index uses green taxes and incentives to an extent worthy of investigation by corporate tax and sustainability professionals. Countries in which the government does not use green taxes or incentives at all, or does so only minimally, have not been included in the sample of countries selected for review in the Index.