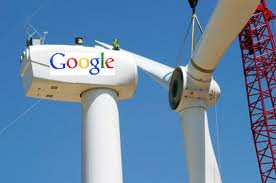 As we reported in this space last week, after several months of dithering Congress approved a 10-year extension of federal tax credits for alternative energy projects. The flurry of year-end legislative action means at least $18 billion more in subsidies to spur the continued development of solar, wind and biofuel power generation.

At least one major corporate player believes the private sector should take the lead in the transition to a green energy power grid, and we’re pleased to report they are putting their money where their mouth is, bigtime.  Google ponied up $200 million last month for the 161-megawatt Spinning Spur Wind Farm in Amarillo, TX. This initiative puts the total yield of the Internet giant’s alternative ventures at more than a whopping two gigawatts of green power.

If you can’t wrap your head around what that kind of new power generation capacity means to the average user of electricity, Google has created a helpful graphic that provides some easy-to-understand benchmarks: 2 GW is enough juice to power 5oo,ooo U.S. homes for a year; it can fuel an electric car for a trip around the world – 150,000 times; and it could power all of the public schools in New York, Oregon and Wyoming for a year, combined. (View full graphic)

While 2 GW is very impressive, a couple of other statistics cited in a recent report in The Atlantic provides some perspective for measuring progress in the ongoing conversion to green energy: the total alternative energy generating capacity in the U.S. stands at about 1,054 GW. On the brighter side, a little over a decade ago this total was 2 GW.

Google does not appear to be deterred by the size of the challenge.

“We look for projects like Spinning Spur because, in addition to creating more renewable energy and strengthening the local economy, they also make for smart investments: they offer attractive returns relative to the risks and allow us to invest in a broad range of assets,” stated a company blog post.”We’re also proud to be the first investor in an EDF Renewable Energy project that is not a financial institution, as we believe that corporations can be an important new source of capital for the renewable energy sector.”

If you’re searching for corporations playing a leading role in environmental stewardship, that’s a top result.