By Dominique Cantelme
From the September/October 2012 issue

Often noted as a microcosm of the entire country,  Illinois is the 25th most extensive and the fifth most populous state in the U.S. It is situated at the geographic center of the nation and is the crossroads for a wide range of business sectors, including manufacturing, finance, agriculture, technology and warehousing and distribution. Illinois has a broad economic base with Chicago in the northeast; small industrial cities and great agricultural productivity in the central and western regions; and natural resources like coal, timber and petroleum in the south.

The state boasts an excellent transportation infrastructure that makes it a natural and cost-effective location for any business. Its modern system utilizes air, ground, rail and waterways for direct routes to every U.S. market as well as international ports.

Illinois rail network offers 52 railroads that provide service to every part of the country and its prime location also makes the state a natural hub for air travel. Illinois is home to one of the world’s busiest airports, Chicago’s O’Hare International and a major commuter hub at Midway Airport. In addition, the state has more than 137 public use airports, 270 heliports and 840 aviation facilities. Illinois has 1,118 miles of navigable waterways bordering or passing through it to provide a link between the state and the Atlantic Ocean (through the St. Lawrence Seaway and Great Lakes) and the Gulf of Mexico, functioning as cost-effective highways to move products to consumers around the globe. Both the Illinois International Port District and the Tri-City Regional Port District near St. Louis are Foreign Trade Zones, providing low-cost production and warehousing facilities for imported and export-bound products. Foreign trade zones also are located in Peoria, Lawrenceville, Rockford and the Quad Cities.

Illinois has the fifth largest GDP in the country at $670 billion, a strong workforce and is home to 33 Fortune 500 companies. Chicago in particular is a major player in business. It is home to the World Trade Center Chicago and the Chicago Board of Trade, the Mercantile Exchange, the Board of Options Exchange and the Chicago Stock Market. Nearly half of the state’s workers are professionals, skilled technicians, craftspeople or machine operators and approximately 59.1 percent of the workforce has gained education beyond high school.

Wheeling, IL: Mastering The Art Of Collaboration
Wheeling, IL is becoming increasingly recognized for its ongoing collaboration between local government, area educational institutions, workforce development partners, industrial brokers and manufacturers in the area. The Village’s continued business outreach efforts have resulted in increased occupancy levels within its 14,500,000-square-foot industrial base. The current vacancy rate has fallen below 7 percent, which is among the lowest industrial vacancy rates in the region.

Peter Vadopalas, Wheeling’s Director of Economic Development, cites the community’s problem solving attitude as the foundation of recent business growth. “As we began to hear concerns over the past few years about skilled worker recruitment from our industrial employers, we naturally began to seek out partnerships and programs to try to address the challenge.” Linking with its workforce development agency, paid internships with area manufacturers were created to offer opportunities for unemployed youth to gain exposure to career options in the sector. The Village initiated the Wheeling Industrial Network, a shared interest group among its resident manufacturers, to advise on the industry’s priorities, provide a communication network to disseminate information about employer incentives and to nurture collaboration among local business owners.

“Wheeling is also blessed to have one of the most innovative high school administrations in the region, and Wheeling High School is certainly our key partner in engaging students in relevant science and technology education,” said Vadopalas.

Wheeling High School is garnering regional and national recognition for its STEM curriculum and implementation of a career pathways program. Particularly in the area of advanced manufacturing and engineering, the Society of Manufacturing Engineers Education Foundation has identified the school as a national model site. The school boasts a state of the art manufacturing facility and opportunity for students to earn MSSC and NIMS credentialing prior to graduation. Wheeling High School also is recognized as a national model site in their offering of a full spectrum of pre-engineering courses from 6th to 12th grade through the Project Lead the Way program.

This level of engagement and integration recently caught the attention of a technology consortium led by Intel and HP as they evaluated potential host communities for an innovation pilot to introduce small and mid size manufacturers to advanced virtual prototyping and smart manufacturing technologies. After a national search, Intel in August announced its selection of Wheeling because of its integrated network between local government, its educational institutions and the local business community. Plans are underway for a series of informational workshops to educate area manufacturers about high performance computing applications that can accelerate design, optimization and commercialization of new products and processes.

The community’s manufacturing base is anchored around the Village’s general aviation airport, Chicago Executive Airport, the third busiest in Chicagoland. The Village recently approved the third new corporate hangar project in as many years and is reviewing opportunities to create expanded land availability in response to increased demand.

“Chicago Executive Airport links Wheeling to the world—we regularly see international visitors from India to Canada to South America travel through our airport. The Village plans to capitalize on this business development asset by attracting complementary aviation and business services, hospitality and dining opportunities.”


Huntley, IL: Activity Abounds
Huntley, Illinois, a community of approximately 25,000 located 30 miles west of O’Hare airport on Interstate 90, has witnessed a significant increase in economic activity in the past 12 months. Growth has come in virtually all forms of development including retail, manufacturing/industrial, residential, institutional and infrastructure.

Scheduled for completion in late 2013 is a $69 million full-access tollway interchange. Already underway, the project includes a seven lane overpass and only two traffic signals to aid in the free flow of traffic, a new IDOT initiative. Although similar projects have been identified for construction, funding became a significant issue for Huntley’s interchange. To move Huntley’s project to the top of the Illinois Tollway Authority construction list, a unique funding mechanism was conceived and implemented. 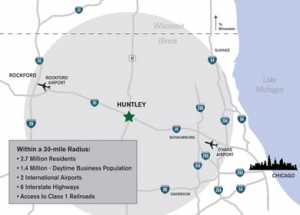 Led by the Village of Huntley through the engineering and design approval phases, the interchange project was funded by a consortium of five governmental entities including the Illinois Tollway Authority (50 percent), the Illinois Department of Transportation (25 percent) and McHenry County, Kane County and the Village of Huntley funding the balance (25 percent). Although rare by its funding alone, McHenry County’s participation has been visionary because the interchange is located outside of McHenry County. Huntley, located in both McHenry and Kane Counties is seen as the interstate gateway to McHenry County, and Huntley’s Village officials successfully focused on that aspect when working to obtain agreement with McHenry County officials to participate in funding.

During a ceremony held on August 27, 2012, Gov. Pat Quinn stated, “At a time when other states are curbing transportation projects, Illinois is moving forward. This project will improve the quality of life for residents in Huntley, McHenry County and Kane County for years to come, and will do so while protecting the environment. It’s all about jobs. We have to have, in Illinois, an attitude that we’re going to focus in on economic growth and jobs for everybody in every region and every county.”

After having its initial state application denied, Centegra received approval in July for the construction of a new $233 million Huntley Hospital. The 128 bed full service hospital is anticipated to create more than 800 construction and 1,100 permanent jobs.

Michael Eesley, Centegra’s chief executive officer, said better tollway access represents an important partnership with the new hospital. “It allows for people that want to receive care from a variety of areas to be able to get on and off the highway to do that and we are able to pull labor from a variety of different areas as well,” Eesley said. “We have 1,100 people that’ll be working within our organization … and this just gives us the ability to draw from other areas.”

In the manufacturing/industrial segment, several firms have recently located or made plans to locate in Huntley. Among them, FYH Bearing, Japan’s largest fixed ball bearing manufacturer, has chosen Huntley for its new 40,000-square-foot facility to serve as its Western Hemisphere distribution and sales location. Stated Jay Frazor, Operations Manager, “Without a full access interchange, our ability to transport product, our staff and management would have been significantly more complicated and expensive. Our Japanese management team can easily leave O’Hare by immediately accessing I-90 at the airport, and remain on I-90 all the way to Huntley.”

During 2012, access to one of Northern Illinois’ major “backbone” fiber optic lines will be completed. Large users of data including data centers, call centers, engineering firms and larger manufacturing firms also have expressed greater interest in locating in Huntley to take advantage of this infrastructure.