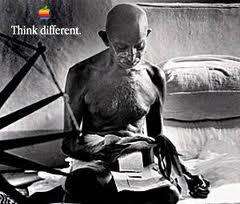 Apple harnessed the power of the Internet to become the global earnings leader of a high-tech empire that delights consumers with its revolutionary gadgets. There now are an estimated 70 million iPhones and 30 million iPads in use worldwide, and an app for just about everything. Apple’s stock recently topped more than $500 a share, which may be even higher than what it charges for the soon-to-be unveiled iPad3.

Along the way, Apple and its late founder Steve Jobs positioned the Cupertino, CA-based tech giant as a counterculture icon. Jobs purloined the company’s name from the Beatles’ recording studio and embraced a slogan — “Think different” — which was a sarcastic retort to stodgy, buttoned-up competitor IBM’s venerable “Think.” Apple’s ads featured stand-alone portraits — with or without their permission — of cultural giants who challenged the global status quo, including Gandhi, Muhammad Ali and John Lennon.

This week, less than a month after The New York Times published a scathing expose of working conditions in the Chinese factories that make Apple’s products, Apple found itself on the wrong end of Web Power: online petitions, signed by more than 250,000 Apple customers demanding the company address the labor abuses in China, were delivered to Apple stores all over the world.

The conditions described by the Times (https://businessfacilities.com/blog/jobs-in-name-only/) at Apple’s primary supplier, Foxconn, are — to put it mildly — horrendous.

Foxconn maintains 13 factories on the Chinese mainland, including a facility in Shenzhen known as Foxconn City. Up to 450,000 workers are jammed into the 1.2-square-mile Shenzhen complex, living in dorms next to the factory. Thousands of them, including child laborers, often are summoned in the middle of the night and ordered to begin unscheduled 12-hour shifts.

The labor practices at Foxconn’s plants are so bad that dozens of workers have committed suicide by throwing themselves off the roofs of the factories. The jumpers are so numerous that Foxconn installed safety nets along the edges of the factory roofs to catch them. Jumpers caught in the nets are hauled off to meet special “counselors” from the Chinese Communist Party, who no doubt offer them an “attitude adjustment” at the nearest political prison.

Almost immediately after the Times published its expose, protests against Apple began to materialize, including demonstrations at the company’s stores on several continents. Mark Shields, who identifies himself as “an Apple customer,” posted a petition on Change.org entitled Apple: Protect Workers Making iPhones in Chinese Factories. Last week, Foxconn’s computers were hacked as part of the protest over labor conditions, according to London’s The Guardian newspaper.

We’ll never know how Steve Jobs — who famously told President Obama that the 700,000 jobs Apple outsourced to China would never come back to the U.S. — would have responded to this huge stain on Apple’s carefully cultivated image. But we’re pleased to report that Jobs’ successors at the helm of Apple have at least taken the first step to think differently about their use of slave labor in the dictatorship that is the People’s Republic of China.

Apple announced Monday it’s hired a non-profit labor group to examine working conditions at some of its suppliers in China. The Fair Labor Association (FLA) will conduct what Apple calls “special voluntary audits” of Foxconn’s plants in Shenzhen and Chengdu. Apple said the first inspections already are underway and has promised its findings will be posted on the FLA website at www.fairlabor.org.

“We believe that workers everywhere have the right to a safe and fair work environment, which is why we’ve asked the FLA to independently assess the performance of our largest suppliers,” Tim Cook, Apple’s CEO, said in a statement. “The inspections now underway are unprecedented in the electronics industry, both in scale and scope, and we appreciate the FLA agreeing to take the unusual step of identifying the factories in their reports.”

However, some labor advocates reacted to the announcement with skepticism.

“FLA speaks on behalf of the companies, not workers,” said Li Qiang, director of New York-based China Labor Watch. “If Apple wants the inspections to be accurate and trustworthy, it should have labor advocacy groups who speak for the workers involved in the inspection process.”

Shields said he is “relieved to hear that Tim Cook is taking this seriously and breaking ground in the industry with Fair Labor Association auditing. But Apple still needs to use some of their trademark creativity and problem-solving to create a worker protection plan for new products — especially the upcoming iPad3 — so that they’re proactively taking care of their workers.”

The delivery of the Change.org petition to Apple stores appears to have been timed to coincide with the long-awaited visit to the U.S. of Xi Jinping, the Chinese vice president who is the designated heir to Hu Jintao as China’s paramount leader. Mr. Xi will be meeting at the White House with President Obama tomorrow, kicking off the Chinese leader’s “getting to know you” tour of the U.S., a traditional introduction of the incoming president of the world’s most populous nation to America.

In advance of his visit, Mr. Xi answered written questions submitted to him by the Washington Post. Asked about the balance of trade between the U.S. and China — grotesquely tilted in China’s favor thanks to subsidized industries, a manipulated currency and the medieval working conditions of underpaid laborers in Chinese factories — China’s future leader reminded his U.S. audience that “U.S. consumers have saved over $600 billion by using Chinese products.”

Perhaps anticipating a less-than-warm welcome in Washington for this kind of arrogance, the Chinese leadership seems to have exercised its notoriously shrewd propaganda skill in selecting the date of the first official meeting between the U.S. president and China’s soon-to-be president: Obama and Xi will be shaking hands at the White House on Valentine’s Day.

Here’s hoping President Obama will skip the chocolates and flowers and hand Mr. Xi a pile of petitions from Change.org. Then maybe our president can persuade Mr. Xi to think differently by paraphrasing Gandhi:

“If 100 million iPhone and iPad users don’t want their products to be made using slave labor, then 100 bureaucrats in China can’t stop them.”

[Full disclosure: this post was written on a MacBook Pro laptop]