With a total economic output of nearly $800 billion, Florida has the fourth largest economy in the U.S. Over the past decade, the Sunshine State has added more than three million new residents, and its GDP has increased by nearly $300 billion. Florida consistently outpaced the broader U.S. economy prior to the global recession of 2008-09, and has again been in growth mode since mid-2009. Although some real estate markets in the state remain sluggish, Florida’s overall economy is showing signs of renewed vigor, capitalizing on its status as a top travel destination and the commercial crossroads of the Western Hemisphere.

2011 saw significant growth for many of Florida’s industry clusters, which include several world-class, highly specialized ones such as photonics/optics, modeling, simulation & training, next-generation biofuels, aerospace, medical devices, and others.

Several major announcements came for the state’s thriving aerospace and aviation, IT, and biotech industries. This growth was supported by Florida’s Innovation Focus, an economic development program that helps companies take advantage of initiatives that support innovation including tax exemptions on R&D equipment and the Innovation Incentives Fund.

Currently, Florida ranks 2nd among states for aviation, aerospace, and space establishments, with more than 2,000 aviation and aerospace companies employing some 83,200 workers. Florida leaders have helped accelerate this growth through the development of policies and incentives including:

In February 2011, Brazil-based Embraer, the world’s third largest aircraft manufacturer, opened a 150,000 sq. ft. executive jet manufacturing and assembly plant in Melbourne, Florida. Designed to build as many as one hundred Phenom 100 and 300 light business jets a year, the $50 million facility is expected to employ about 200 staff and also serve as the headquarters for all of Embraer’s business jet operations in North America.

In December, Embraer opened its global Customer Center at the Melbourne International Airport in Melbourne. The new 58,000-square-foot state-of-the-art Customer Center becomes the new location for global customers for the entire range of Embraer corporate aircraft to select colors, fabrics, paint schemes and options for their aircraft. The facility also serves as the delivery suites for all U.S. assembled Phenom 100s. 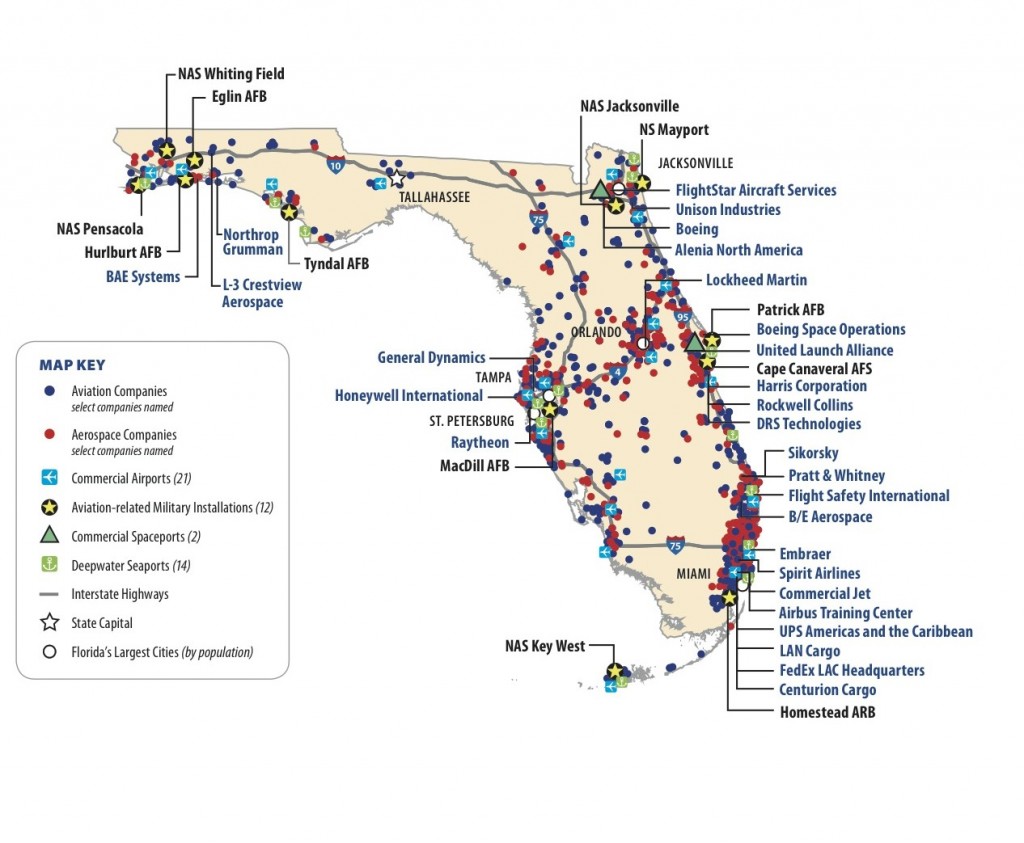 “It is a historic day for Embraer. After 32 years of continuous presence in the U.S., we are extremely proud to have reached full-fledged operations that not only assembles aircraft in a state-of-the-art paperless factory, but also hosts our executive jet customers in the equally impressive Customer Center,” says Frederico Fleury Curado, Embraer president and CEO. “Furthermore, with the on-schedule completion of our Customer Center and imminent delivery of the first Phenom 100, Embraer reiterates its commitment to be closer to its customers and to maintain a strong partnership with the state of Florida and the Brevard County community”.

At the start of 2012, Embraer and its partners won a $355 million contract from the U.S. Air Force to build the A-29 Super Tucano military aircraft, used for advanced flight training, aerial reconnaissance, counterinsurgency operations and light air support. To be manufactured in Jacksonville, Florida, with parts from American suppliers, the A-29 program will support at least 1,200 jobs.

In October 2011, Boeing announced that it would manufacture and test its Crew Space Transportation-100 spacecraft and locate its Commercial Crew program headquarters at Florida’s Kennedy Space Center. Boeing also plans to modernize its Orbital Processing Facility-3, previously used to perform maintenance on the space shuttle, to manufacture and process the new spacecraft, plus office, laboratory and logistics areas to support mission operations and training. Expected to create 550 new jobs by 2015, the project gives a strong boost to Florida’s space-related economy following retirement of the shuttle program.

“We are extremely pleased that Boeing will locate its Commercial Crew headquarters here in Florida,” said Frank DiBello, president of Space Florida, the State’s space economic development agency. “This positions our state well for future growth and a leadership role in NASA’s next generation human space exploration initiatives. It is also a key factor in ensuring Florida’s space-related economy continues to thrive in the post-shuttle retirement.”

In March 2011, Chromalloy, the world’s largest independent supplier of coatings, replacement parts for turbine airfoils, and other critical engine components for commercial airliners and the military, announced the relocation of its corporate headquarters along with a new Technology Center of Excellence, to Palm Beach Gardens, Florida. Employing more than 50 technical, executive and administrative staff, the new 30,000-square-foot facility comprises research labs, office space, and a 10,000-square-foot warehouse, and builds on the success of the company’s $30-million expansion of its turbine engine component casting operation in Tampa in 2010.

2011 was also a landmark year for high-tech growth in the Sunshine State, with significant investments announced for its growing IT and biotech sectors.

Florida’s infotech industry is flourishing—the state currently ranks fourth in the U.S. in high-tech employment and third in the volume of IT exports, with over 25,000 companies employing nearly a quarter of a million workers. They specialize in fields ranging from photonics research and web technology development, to electronics manufacturing and digital media productions.

In 2011, Harris Corporation, an international communications and information technology company, announced plans to create a new $100 million high-tech center on its Palm Bay campus that will become the centerpiece for some of the company’s most advanced engineering efforts. The planned six-story, 450,000-square-foot center is part of a broader modernization initiative designed to foster engineering innovation, while retaining existing and attracting new highly skilled engineers to the region.

“Harris engineers develop some of the world’s most trusted technology solutions, which touch billions of lives every day. This major initiative demonstrates our commitment to provide employees with world-class working environments that help foster innovative solutions for our customers around the globe,” said Bill Brown, Harris president and CEO said. “This long-term investment also reaffirms Harris’ commitment to maintaining our strong presence here in Central Florida. We thank all of the state, regional and local organizations that are helping to make this possible.”

Highlights of the new Harris high-tech center initiative include:

Harris is one of the largest public companies headquartered in Florida, and is the largest technology company based in Central Florida. Harris’ 6,500 Florida employees have developed some of the world’s most advanced communications and information networks, products, and services.

Over the last decade, Florida has also established itself as a national leading location for biotechnology innovation and industry growth. The state is home to leading research institutions like Scripps Florida,

In 2011, IRX Therapeutics Inc., a clinical stage biotechnology company, announced its relocation from New York City to St. Petersburg, Florida, to eventually employ more than 280 staff at an average annual wage of at least $90,000.

Developing therapies to treat cancer and infectious diseases, IRX has raised $90 million to fund preclinical research, manufacturing and clinical development of its chief product IRX-2. In anticipation of a potential commercial product launch, IRX staff will work in commercial-scale manufacturing and expanded development functions. IRX’s move actually marks its return to Florida and the Tampa Bay Region, where at the University of South Florida the company originally developed its technology.

Looking ahead, Florida business leaders will build upon existing strengths, while creating new incentives and programs in order to recruit new business to the state and produce higher-wage jobs for Floridians. On January 11, 2012, Enterprise Florida announced its priorities for the year ahead for the Florida Legislature, including reenactment of the Florida Opportunity Fund, Creation of the Florida Infrastructure Fund, Quick Response Training and update of the Innovation Incentive Fund Approval Process.