“A succinct regional economic development strategy in recent years has propelled North Carolina, and 2022 was another banner year for the state in capital investment and jobs creation,” said Business Facilities Editorial Director Anne Cosgrove. “Paired with world-class education and R&D resources, the support of incentives and programs from organizations at all levels for a variety of industries, including high-growth sectors such as electric vehicles, made the state our choice for top recognition this year.” 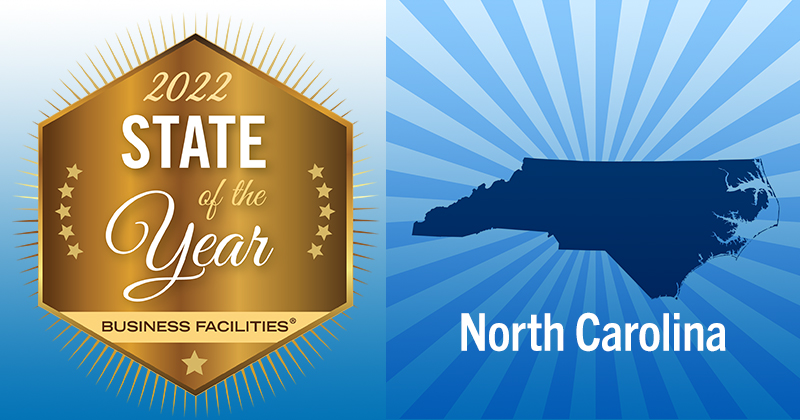 Bipartisan efforts in North Carolina toward fostering a business-friendly environment for a diversity of industries made a strong showing over the past year where a steady stream of relocation and expansions were announced across the state. New investment from economic development projects in 2022 totaled $19.3 billion, representing a significant increase compared to $10.1 billion of new investment in 2021.

The dynamic nature of site selection and economic development over the last year spurred Business Facilities’ editors to recognize five states as regional runners-up in the 2022 State of the Year lineup. “Business costs and workforce availability continue to lead decision-making for companies,” said Cosgrove. “Still, as the factors for site selection evolve, we wanted to highlight states that are showing strong progress in their regions.”

New York is recognized for Clean Energy Programs. Growing the green economy through clean energy initiatives is capturing attention for the Empire State. A significant action in August was the passing of Green CHIPS legislation aimed at maintaining environmental protections while making New York a hub for semiconductors. In early 2022, Governor Hochul announced plans for a $500 million, nation-leading investment in offshore wind, expected to deliver 9,000 megawatts of offshore wind energy by 2035. Meanwhile, solar energy initiatives are aiding the goal of the state obtaining 70% of its electricity from renewable sources by 2030. In October, when Micron announced its plans to invest $100 billion into semiconductor fabrication facilities in the state the company noted the availability of clean, reliable power as key.

Florida is recognized for Population and Workforce Growth. According to the U.S. Census Bureau, the Sunshine State is the fastest growing state for population, with an increase of 1.9% to between 2021 and 2022. Florida’s labor force grew by 352,000, or 3.4%, over the year in November 2022, more than double the national rate. Since the COVID-19 pandemic, companies of all sizes have moved to the state, including real estate investment group Blackstone, global investment bank Goldman Sachs, and autonomous vehicle tech firm Argo AI. Florida’s defense industry is a critical economic driver with more than 860,000 direct and indirect jobs. In June, Governor Ron DeSantis signed six bills to support veterans, military members, and their families in finding employment and educational opportunities.

Ohio is recognized for Focus on Innovation. Economic development organizations across this state are focused on high-growth sectors, which includes turning attention to building entrepreneurial ecosystems and amplifying innovation hubs. With significant investment from the state in place, over the next decade several Innovation Districts are intended to create 60,000 new jobs, 47,500 STEM certifications and degrees, and to generate an estimated $9 billion annual economic impact. JobsOhio, together with the state of Ohio and partners, have invested in three world-class Innovation Districts in Cincinnati, Cleveland, and Columbus. In early 2022, Intel announced its plans for an initial investment of more than $20 billion to build two leading-edge chip factories in Licking County, outside Columbus.

Texas is recognized for Leading Exports. In June 2022, the state’s top exports were from traditional industries, including oil and gas/petroleum products and basic chemicals/resin, rubber, and fibers. The list was also led by tech-related products, including semiconductors/computer equipment and aerospace products — a trend that’s been growing as the state’s economy diversifies. During just the first half of 2022, Texas exported $195 billion in goods. Texas has 29 official ports of entry that serve as critical gateways to global trade. Announced in July is a $68 million channel improvement project at the Port of Brownsville along Gulf of Mexico.

Arizona is recognized for Leading Manufacturing Employment. November 2022 figures from the Bureau of Labor Statistics show the state ranked first for year over year job growth (8.32%), with more than 15,000 manufacturing jobs added through November. Arizona also ranks among the top three states for the fastest jobs recovery in manufacturing, adding more than 17,000 jobs since the pre-pandemic peak. With significant announcements in 2022 from semiconductor makers, bioscience, and other high-growth industries, manufacturing job gains can be expected to continue to soar. Meanwhile, Drive48, a collaboration established in 2021 by government, industry, and academia to bolster workforce training for high-tech manufacturing, has been allocated $30 million from the state to build six additional advanced manufacturing training centers.

Full coverage of the 2022 State of the Year and regional runners-up will be featured in the January/February issue of Business Facilities.