Despite recent layoffs, technology employment continues to hold steady to begin the new year, according to analysis of the latest labor market data by CompTIA. Tech industry companies added 17,600 workers in December, with job gains recorded in four of five sector categories, CompTIA’s analysis of the U.S. Bureau of Labor Statistics’ latest Employment Situation reveals. It was the 25th straight month of net employment growth in the tech industry.¹

Among industry sectors, professional, scientific and technical services (38,654); finance and insurance (33,538); and manufacturing (26,763) reported the most activity.

Nationwide, employers throughout the economy added an estimated 130,000 tech workers in December, helping to drive down the tech occupations unemployment rate to 1.8%, compared to the overall national rate of 3.5%.²

Employer job postings for future tech hiring declined for the second consecutive month, but still totaled more than 246,000 in December. Positions for software developers and engineers accounted for nearly 30% of last month’s jobs postings. IT support specialists, IT project managers, systems engineers and network engineers were also in demand.

“Another wave of positive tech employment data speaks to the many moving parts of a complex labor market,” said Tim Herbert, chief research officer at CompTIA. “Despite the layoffs there continues to be more employers hiring tech talent than shedding it.”

CompTIA’s analysis also shows that 30% of all tech jobs postings are for positions in emerging technologies, such as artificial intelligence, or in roles requiring emerging tech skills. 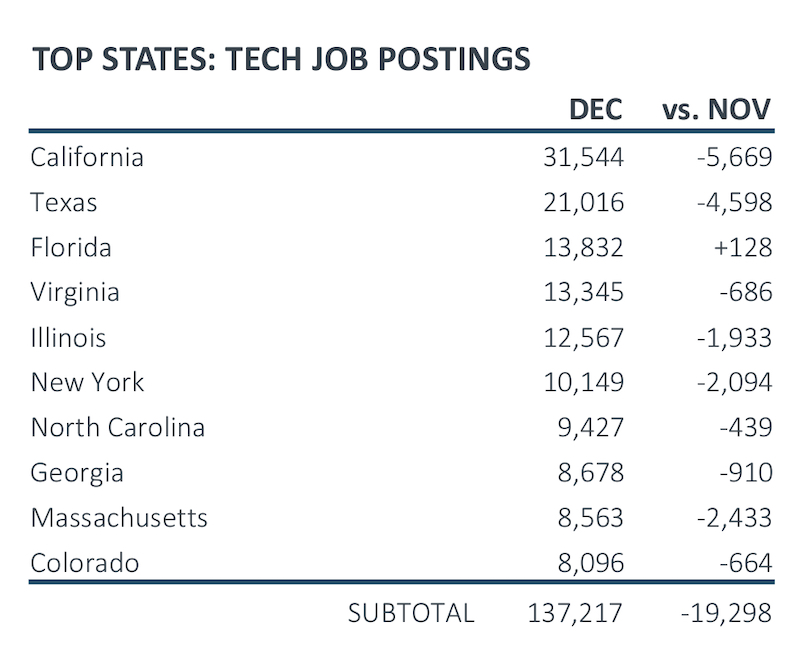 ¹ Recent layoff announcements by technology companies may not show up immediately in government reports, such as the BLS “Employment Situation” report.

² Monthly occupation level data from the U.S. Bureau of Labor Statistics tends to experience higher levels of variance and volatility. Labor market data from the BLS and employer job posting data from Lightcast may be subject to backward revisions.