Have you ever wondered how you’d survive if America were overtaken by zombies? 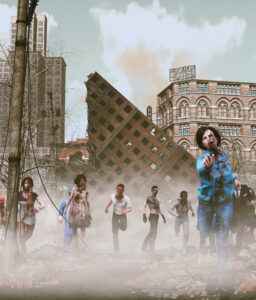 Lawn Love compared the 200 biggest U.S. cities on 26 key indicators of zombie invasion-preparedness, such as the share of the living population in poor health and access to “bunkers,” hunting-gear stores, and supermarkets.

Last year, Huntington Beach earned the top spot as Lawn Love’s 2021 Most Zombie-Resistant City, but the California city has been overtaken by the popular Florida vacation spot.

One of the factors that makes Orlando well-prepared to fight off a wave of zombies is plenty of hospitals per capita (No. 30) to contain a disease outbreak. Orlando also ranked first in both the Supplies and Protection categories.

Where would you be more likely to join the throngs of the living dead? Here are the five cities where you are the least likely to survive a zombie attack: Sunrise Manor, NV; Paradise, NV; Enterprise, NV; Spring Valley, NV, and Paterson, NJ.

(A word of advice: When the Zombie Apocalypse comes down, don’t head to Nevada.)

Check out the infographic below to learn more:

Lawn Love also asked some experts to share their thoughts on what is most important when fighting the undead. When asked “Where are the best places to seek shelter when on the move?” Thomas J. Duszynski, MPH, a lecturer and epidemiology education director at Indiana University-Purdue University in Indianapolis, offered the following:

“In today’s world there are shelters that can be stood up quickly to accommodate the movement of people. The more time to prepare and plan, the better the shelter. You would need/want a place with food, clean water, working toilets and showers and a low population. You would want medical care if needed.

There is the joke that the best shelter is a Sam’s Club or Costco. They are generally built out of concrete. They have a lot of food, places to sleep, water and you need a membership to get in, which the presumption is that zombies wouldn’t have a membership and be turned away. But thinking about that, would everyone else go there? Then resources become more challenging when everyone is clamoring for them.

Also, when dealing with an infectious disease-causing agent, the fewer people around you, the less likely disease transmission can occur.”

Visit the Lawn Love blog to read more experts’ takes on survival in the face of a zombie apocalypse.