In Decatur, Governor JB Pritzker and the Illinois Department of Commerce and Economic Opportunity (DCEO) have awarded the first Reimagining Electric Vehicles in Illinois (REV Illinois) tax incentive package to T/CCI Manufacturing. The announcement followed passage of the Climate & Equitable Jobs Act (CEJA) and the REV Illinois Act, both of which were part of an effort to make Illinois the best state in the nation to drive and build an electric vehicle.

“Less than 10 months ago, I signed Illinois’ groundbreaking Reimagining Electric Vehicles Act into law. Today, I’m proud to announce we’re welcoming yet another electric vehicle investment to Illinois – and the first of many that ambitious legislation will produce,” said Gov. Pritzker. “And T/CCI isn’t just investing in their own success – they’re bringing the Decatur community along for the ride. We’re bringing all of Illinois into the 21st century economy, with good jobs and business opportunities, and this investment is yet another way we’re making that our reality.”

The incentive package builds on Illinois’ vision of greatly expanding clean energy manufacturing and jobs while creating public-private partnerships that will provide opportunities for companies to collaborate on R&D and expand training. In addition to REV incentives valued at $2.2 million, the FY 2023 budget appropriated $21.3 million in capital grants to the City of Decatur and Richland Community College to create a first-of-its kind research and innovation facility and training program in partnership with T/CCI.

“Our administration is committed to taking the steps needed for a green future that provides the economic opportunities to uplift Illinoisans. This announcement is a major milestone in getting us there,” said Lt. Governor Juliana Stratton. “Illinois’ efforts to bolster electric vehicle manufacturing is creating jobs, investing in our communities, and leading the charge in effective climate action.”

“Governor Pritzker’s vision for Central Illinois catapults our economic development strategy into the future” said Julie Moore Wolfe, Mayor, City of Decatur. “This is a huge investment in jobs, people, and innovation not only for Decatur and Macon County, but for the entire Central Illinois region.”

“This is a significant moment for T/CCI, the City of Decatur, and the State of Illinois, as we embark on new programs to transition our industry toward widespread electrification,” said Richard Demirjian, President of T/CCI Manufacturing. “T/CCI is recognized in the industry as a leader in compressor technology, already having developed a largest range of EV compressors in the market. We’re excited to use our expertise in innovation and component manufacturing to advance Illinois’ position and create a successful partnership that drives long-lasting economic growth.”

T/CCI’s reputation as a global leader in EV technology will play a critical role in advancing Illinois’ position as a leader in the market, creating a usage model to serve the needs of EV and other relevant industries across the world and conduct research to advance science and innovation in disruptive technologies.

“As we embrace the shift to electrification, it’s public-private partnerships like this that help accelerate our impact on sustainable mobility,” said Michael Grahe, Executive Vice President of Navistar Inc. “Our company has a long-standing partnership with T/CCI for their leadership to deliver technology-based solutions and has recognized their valuable contributions to the industry—including naming them 2022 Supplier of the Year in Innovation. We are excited to see our state making investments in American manufacturing that will help shape the future of transportation as we move to zero emissions.”

The more than $214 million, 169,000-square-foot addition at the Bloomington, IL plant will produce Kinder Bueno products for the North American market.
Read more…

“Today’s announcement, the second in Decatur in the last few weeks, is another example of Governor Pritzker’s commitment to spurring economic development in communities across Illinois,” said DCEO Director Sylvia I. Garcia. “We’re proud to partner with leaders like T/CCI, who are investing in innovation, research and development, and manufacturing right here in Illinois that supports the growth of electric vehicles and continues Illinois’ leadership in green technologies.”

As part of the larger incentive package, Illinois’ FY 2023 budget included $15.3 million to Richland Community College and $6 million to the City of Decatur in capital grants to create an EV Innovation Cluster, including a Climatic Center for Innovation & Research Facility. This will support the growth of the EV sector in Illinois by creating innovative training programs and state-of-the-art facilities for research and development, which includes a full-scale climactic center for testing and simulations. The facility will be located on the T/CCI Decatur campus.

Richland Community College and T/CCI are working in partnership with the University of Illinois (UIUC) Grainger College of Engineering and Northern Illinois University on a training academy. The training academy will offer a new workforce training and development program with a focus on EV advanced engineering, software technology, a STEM pathways program, and accredited apprenticeship programs that offer world class training in electrification.

The Climatic Center for Innovation & Research facility will support technology advancements and climatic testing for high voltage systems, battery cooling and both A/C and heat pump capabilities. This Center will include a DC fast charger for electric vehicles for testing capability under both extreme cold and hot conditions. The Center will advance Illinois’ EV leadership position to deliver high-profile research and critical advancements in charging, range, emissions, and data analytics. The Center will be open businesses and researchers looking to accelerate opportunities for faster-to-market technology development, enhanced safety, emissions control criteria development and other advancements that will accelerate adoption of electrified technology.

“Together we are establishing a new model for Illinois that sets the stage for how education, research and industry work together to cohesively advance us faster, invest in our people and grow our economy,” said Richland Community College President Cris Valdez. “This state-of-the-art facility will provide world class training in electrification, a registered apprenticeship program, along with immersive industry partnerships and testing available to the electric vehicle industry. At the same time, it will build the bridge from employer and unemployed to keep pace in a rapidly changing economy, and address the need to build a skilled workforce. We are extremely excited to be a part of this endeavor and grateful to Governor Pritzker and DCEO for their investment in Richland Community College.” 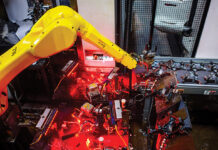