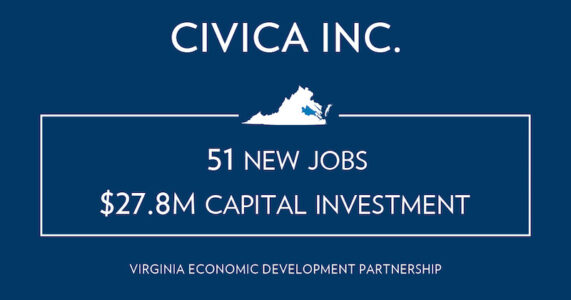 “Civica’s new laboratory testing facility in Chesterfield County extends the footprint of the rapidly growing pharmaceutical manufacturing cluster in the region and will support the coalition’s long-term vision to serve as the world’s central access point for advanced pharmaceutical manufacturing and R&D,” said Secretary of Commerce and Trade Caren Merrick. “Today we celebrate Virginia’s vital role in addressing the shortage of affordable essential medicines in our nation and the investment in a new facility that will create high-paying jobs and accelerate research and innovation in the industry.”

Support for Civica’s job creation will continue to be provided through the Virginia Talent Accelerator Program, a workforce initiative created by VEDP in collaboration with the Virginia Community College System and other higher education partners, with funding support from the Governor’s administration and the Virginia General Assembly. In addition, Brightpoint Community College has built a new training program for people to gain the qualifications needed to qualify for a high-paying Manufacturing Technician role in Civica’s new Petersburg facility.

“Chesterfield County is thrilled to have Civica’s new laboratory testing facility locate at the Meadowville Technology Park,” said Chesterfield Board of Supervisors Chairman Chris Winslow. “The new facility will play a key role in helping to support the manufacturing and testing of lower-cost generic drugs, which will help bring down costs for our residents.”

DroneUp, LLC will invest a total of $27.2 million to expand its headquarters in the City of Virginia Beach and establish a testing, training, and R&D center at Richard Bland College in Dinwiddie County. The drone flight services innovator and aviation technology provider also considered Arizona, New York, North Carolina, and Texas for the projects, which will create 655 total new jobs in Virginia.

DroneUp will invest $7 million to expand its headquarters in Virginia Beach, creating 510 new jobs. The company will also invest $20.2 million to establish a new testing, training, and R&D center for drone operators at Richard Bland College, which will create 145 new jobs.

In addition to the headquarters facility and training center, DroneUp plans to establish three drone hubs at Walmart locations in Virginia this year. DroneUp recently announced a multi-year commercial services agreement with Walmart, Inc. to provide drone delivery services at 34 sites, providing the potential to reach 4 million U.S. households by the end of the year. Walmart has a minority stake in DroneUp and a seat on its board and in turn, DroneUp is the exclusive provider of drone services for Walmart.