Positioned right in the middle of the country, Kansas may be perfectly placed to grab business from all ends of the nation, particularly with companies that want to be the most convenient to work with.

The state, with a population of nearly three million, offers a plethora of benefits, including an educated workforce, low taxes and a low cost of living. With Topeka, the capital, and Wichita, its largest city, making a lot of positive news—plus Kansas City just across the border—Kansas is a magnet for many across the Midwest.

Various groups in the state are promoting its many assets too, trying to woo business to the Sunflower State who otherwise might consider a different location for their companies’ expansion or new home.

Topeka, KS: In The Heart Of The Heartland

Entrepreneurship and innovation abound in Topeka. Ideally located in the heart of the heartland and just an hour’s drive from Kansas City, Topeka is a capital city on the rise. Known for its robust community partnerships, pro-business climate and unwavering hospitality, the Sunflower State’s capital is a place where both local and national businesses thrive and community support for employers is stronger than ever.

Topeka leaders continue to work with Silicon Valley-based Plug and Play, the world’s premier innovation platform, to stand up and advance the Plug and Play Topeka accelerator program, which is dedicated to innovation in the animal health and agricultural technology sectors. Among other strategic developments, the new accelerator—which has already graduated multiple cohorts and facilitated meaningful relationships between startups and corporate partners—has positioned Topeka as a key player within the Kansas City Animal Health Corridor and led to the construction of the multimillion-dollar downtown ASTRA Innovation Center.

The innovation center is one example of the dynamic investments being made in Topeka’s downtown corridor and elsewhere. Strategic investments on the part of city and county officials have led to increased opportunities for businesses and rising economic prosperity, as evidenced by a 44% decline in poverty in Shawnee County over the past decade. Topeka and Shawnee County’s Joint Economic Development Organization (JEDO), which is funded by a half-cent county-wide sales tax, has also driven business attraction and expansion. JEDO’s funding is earmarked specifically for local economic development, and GO Topeka, the economic development arm of the Greater Topeka Partnership, works closely with businesses to identify potential opportunities for growth.

“The development incentives provided by JEDO are a tremendous sign of the pro-business mindset Topeka and Shawnee County are deploying,” said Neal Spencer, president and CEO of Ernest-Spencer Metals Inc., which is expanding and creating new jobs thanks to a JEDO incentive agreement. “The partnership and excitement that these incentives create are precisely the catalyst that our company looks for in a growth partner.” 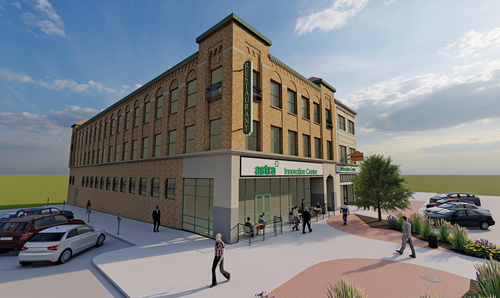 Highly regarded infrastructure and a renewed emphasis on harnessing local and regional strengths is also helping the capital city cultivate its emerging aviation sector, which is expected to be a focal point for GO Topeka in the year ahead. The economic development organization is working with key stakeholders to devise a plan to better equip area facilities to support businesses focused on aviation, making Topeka an even more attractive place for companies and large corporations to do business. With a statewide emphasis on aviation production, as well as an approved foreign trade zone and aggressive cash incentives available in the capital city, Topeka helps businesses big and small soar to new heights. And with Washburn University, the University of Kansas, Kansas State University, and several community and technical colleges nearby, Topeka is an attractive, affordable community to which regional talent flocks. Your business’ next great hire might just call Topeka “home.”