The Economic Development Corporation of Sarasota County (EDC), located on Florida’s west coast between Tampa and Fort Myers, wrapped its 2021 fiscal year with a new leader in place and impact on the county’s economy that broke all records for the organization. Among other things, its client facilitation and services led to the creation of new high-paying jobs in technology and manufacturing and more than $62 million in capital investment.

In August, the EDC’s board of directors voted to name Lisa Krouse as its president and CEO. Having recently retired as executive vice president and chief administrative officer at FCCI Insurance Group, Krouse brought a unique perspective and credentials as a business executive, attorney, and seasoned HR professional. She also has deep connections throughout Sarasota County with organizations ranging from the Greater Sarasota Chamber of Commerce to CareerSource Suncoast and local foundations.

The move couldn’t have happened at a more critical time. According to the EDC’s Vice President of Business Development Services Erin Silk, the organization is fielding inquiries daily from businesses around the U.S. and abroad, including Canada and Europe.

Silk points to the increasing national attention on Sarasota County’s business climate and quality of life. Among the recognition in 2021 alone was:

It has also been ranked by both CNBC and Verizon as one of the best places to start a business in America.

Businesses may be initially attracted by Sarasota County’s reputation in the media, but they make the ultimate decision to relocate or expand because of opportunities to grow and the county’s outstanding quality of life, making it attractive to leadership and workforce alike. 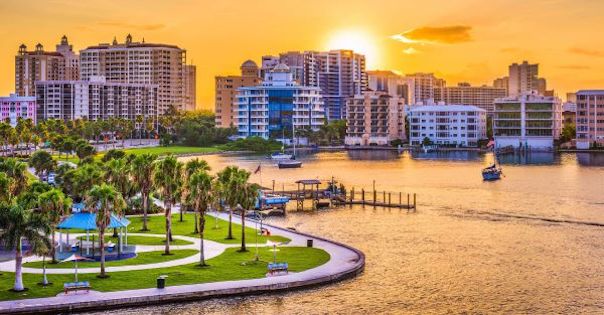 As one of the fastest-growing markets in the U.S., Sarasota County is projected to continue growing at a rapid pace. Estimates are that its population will increase by as much as 20% by 2030, while the annual income migration from other states is $652.5 million and trending higher, according to the Florida Chamber of Commerce Foundation.

Another selling point for businesses is Sarasota Bradenton International Airport—SRQ—which currently has nearly 60 direct flights to various points around the country and continues to expand. Three international airports are also within easy driving distance, in Tampa, Fort Myers, and Orlando. What’s more, major ports are located nearby in Manatee County and in Tampa.

“It’s easy to see why business owners and CEOs are interested in our community,” said Krouse. “They and their employees can live in one of the nicest communities in the country, with great weather, beaches, culture, and A-rated public schools. They can also find all the ingredients needed for business growth: an expanding population with higher-than-average income, low taxes, and easy access to worldwide locations.”

In 2021 the EDC of Sarasota County helped multiple businesses expand, relocate, or establish in the area—among which were Rumble, a digital video sharing platform that recently announced plans to go public, and Harmar Mobility, a manufacturer and national distributor of vehicle wheelchair lifts and other mobility products. It also helped find a home for FleetForce, a truck driving school that helps prospective truck drivers train and acquire their commercial licenses. Both Rumble and FleetForce were featured recently in national media.

To learn more about the EDC of Sarasota County, please visit www.edcsarasotacounty.com.

Want to learn more about economic development in Florida?