This may come as a surprise, but last year more people moved into New York City than out — and not just by a fraction, according to a recent recent migration study by HireAHelper. For the first time since the company began publishing its annual moving trends report, in 2021 86% more people moved to NYC than left.

HireAHelper’s fourth annual U.S. migration study examines over 90,000 moving jobs booked in the United States in 2021, identifies where the biggest swings in population have occurred, and helps explain how the pandemic has impacted work, money and family life over the last year.

“This has been an extraordinary year with a lot going on politically, socially and economically, and it’s fascinating to see the trendlines that large volumes of moving data can reveal about people’s behavior during this time,” said Miranda Marquit, Chief Data Analyst at HireAHelper. “This year’s findings tell the story of how the pandemic has forced people to move for financial reasons, or for family or work reasons — or in some cases, not to work at all.”

In other noteworthy findings, The Villages — an age-restricted community in Sumter County, FL — saw the largest net gain among U.S. cities with three times more people moving in than out. And Arkansas had 44% more people move in than out, the highest percentage of all states. 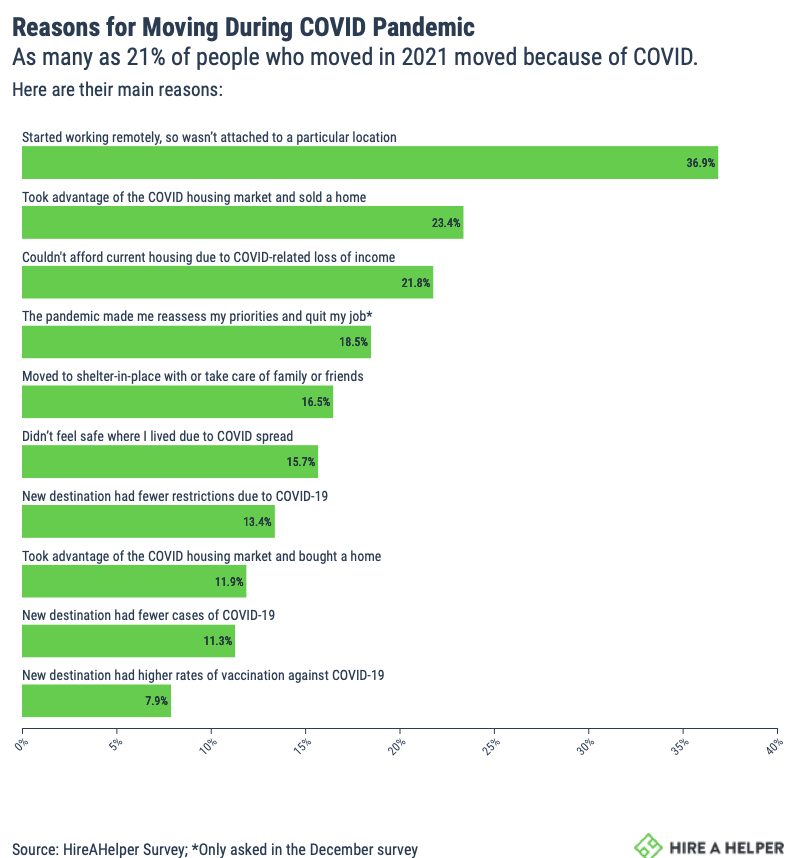 The Great Resignation also revealed itself in the study, as 19% of Americans who moved in 2021 blame the pandemic for making them reassess their priorities and quit their job.

The study revealed other interesting insights, including:

The full 2021-2022 HireAHelper US Migration Report is available here.

Check out all the latest surveys and research regarding economic development, corporate relocation, corporate expansion and site selection.