Ford Motor Company, Samsung Electronics and KORE Power have been selected as 2021’s top Deals of the Year by Business Facilities magazine. A committee of nationally-recognized site consultants selected this year’s winners. Due to the high number of deals that were completed in 2021, this year’s awards competition brought in a record-setting number of submissions. 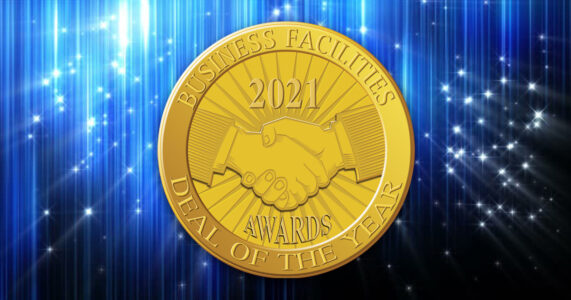 The Tennessee Department of Economic & Community Development earned Business Facilities’ Gold Deal of the Year Award for bringing Ford Motor Company’s Blue Oval City project to Memphis. One of the U.S.’ largest battery and vehicle manufacturing campuses, the 3,600-acre mega campus will result in 5,800 new jobs in West Tennessee. All told, Ford–working with SK Innovation–will invest about $5.6 billion in the project that will include building the Ford assembly plant, a supplier park, and a battery manufacturing plant at the Memphis Regional Megasite.

Ford and Tennessee government officials estimate that the project will generate more than 27,000 direct and indirect jobs to support the site’s operations, and also create more than $1 billion in annual earnings. As part of this initiative, Ford will also build a dedicated battery manufacturing complex with SK Innovation — the $5.8 billion BlueOvalSK Battery Park — creating 5,000 jobs in central Kentucky.

Business Facilities’ Silver Award goes to Taylor Economic Development Corporation for Samsung Electronics’ new state-of-the-art semiconductor manufacturing facility in Taylor, Texas. In late November, the company and Texas Governor Greg Abbott announced that Samsung would make an estimated $17 billion investment in the facility, which would be the largest foreign direct investment in Texas on record. The 1,200-acre facility will be used to produce advanced logic chips that will power next-generation devices for such applications as mobile, 5G, high-performance computing and artificial intelligence, and is expected to create more than 2,000 jobs. Construction will start this year and the facility should be operational by the second half of 2024.

The City of Buckeye, Arizona won the Bronze Award for bringing Idaho-based KORE Power’s new lithium-ion battery storage manufacturing facility to the city. The project will create about 1,700 advanced manufacturing jobs during phase one, another 1,300 jobs in phase two, plus nearly 3,400 construction jobs in the interim. KORE Power foresees almost $1.66 billion in direct economic output for the City of Buckeye over five years.

“This process was by far the most extensive and interesting one for us in years,” said Seth Mendelson, Editorial Director of Business Facilities. “We had so many worthy entries and so many huge projects announced during last year that we knew it was going to be difficult to pick three winners. Our judges did an admirable job of selecting these winners and we are proud to announce them in the pages of our magazine and on businessfacilities.com. In this notable group, Ford Motor Company, Samsung Electronics and KORE Power managed to stand out from the rest.”

Due to the high number of entries, as well as the changing dynamics in site selection, Business Facilities is also announcing winners across 18 different categories. Here are the winners of the 2021 Impact Awards: