Venture Global LNG will invest more than $10 billion in a new liquefied natural gas facility in Louisiana’s Cameron Parish that will employ carbon capture and sequestration technology (CCS) to reduce carbon dioxide (CO2) emissions. The project will result in at least 200 direct new jobs, with average annual salaries of $120,000, plus benefits. Louisiana Economic Development (LED) estimates the project will result in 867 indirect jobs, or a total of 1,067 jobs in Southwest Louisiana.

Virginia-based Venture Global’s new facility, named CP2, will have a nameplate capacity of 20 million metric tonnes per annum (MTPA) of LNG. The CCS process will be used to capture and store underground an estimated 500,000 tons of CO2 emissions from the facility annually. The complex will be located on 650 acres in Cameron, including 170 acres on Monkey Island, providing CP2 with direct access to the deep-water Calcasieu Ship Channel. 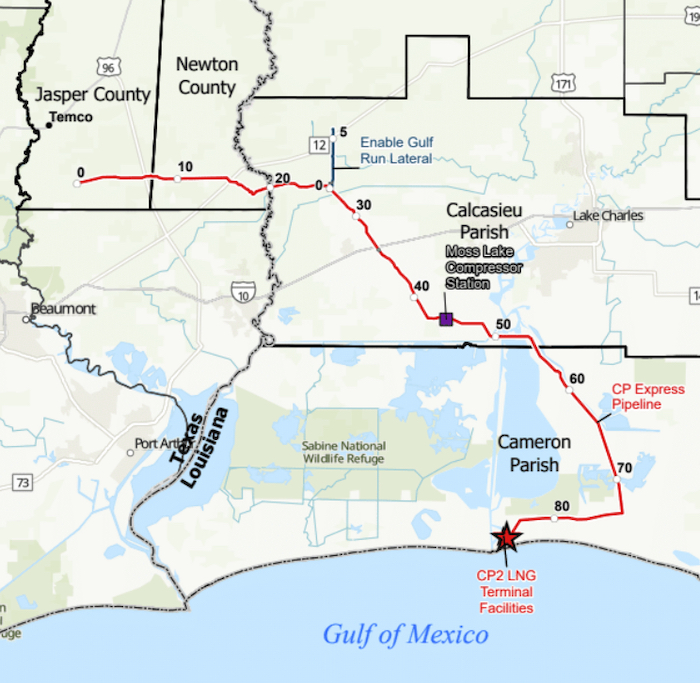 “Venture Global has invested significantly in Louisiana’s economy, and I am proud to celebrate this exciting new project with them,” said Gov. John Bel Edwards. “The CP2 facility in Cameron will create more than 1,000 new permanent jobs and thousands of construction jobs in the area, which will have a significant impact on our economy. And it is incorporating clean energy technology that reduces the amount of CO2 released into the atmosphere, which is significant for our environment. As Louisiana pursues a goal of net-zero emissions by 2050, projects that feature carbon capture and sequestration allow our state to sustain industry without sacrificing our long-term carbon-reduction goals.”

“CP2 will be located in Cameron Parish, adjacent to our existing Calcasieu Pass terminal,” explained Venture Global LNG CEO Mike Sabel. “These two projects, combined with our Plaquemines LNG facility now under construction, represent over $20 billion of investment in the State of Louisiana, and will create thousands of good paying jobs. With two major LNG export projects currently under active construction, Venture Global is on a mission to produce the cleanest low-cost LNG in North America. We are proud to partner with Louisiana in these efforts and in developing carbon capture and sequestration for our facilities. Under the leadership of Governor John Bel Edwards, Louisiana is enhancing its status as an international hub for innovation to tackle the energy and climate challenges of our time.”

“We are fortunate to have growing industry in Cameron Parish and value our partnership with Venture Global,” said Cameron Police Jury Vice President Thomas McDaniel. “This is a standout project and we are grateful for their investment in our community. CP2 is the kind of private-public partnership that means we can leave Cameron Parish better than we found it.”

The company is expected to tap into Louisiana’s Quality Jobs and Industrial Tax Exemption programs.

“Southwest Louisiana welcomes Venture Global’s new mega-project,” said George Swift, president and CEO of the Southwest Louisiana Economic Development Alliance. “We are excited that it includes carbon capture and sequestration capacities. This major investment will further strengthen our region as a global leader in LNG exports. The jobs created will grow Cameron Parish’s workforce significantly and make Cameron Parish the largest LNG exporter in the world.”