BlueHalo has chosen the MaxQ site in Albuquerque, NM for its new state-of-the-art campus. The company provides industry-leading capabilities in the domains of Space Superiority and Directed Energy, Air and Missile Defense and Command, Control, Communications, Computers, Intelligence, Surveillance, and Reconnaissance (C4ISR),and Cyber and Intelligence. The project will facilitate BlueHalo’s acceleration into production and its long-term commitment to investing in New Mexico and creating high-wage manufacturing jobs.

The MaxQ site, developed by Thunderbird Kirtland Development LLC (TKD) and located adjacent to Kirtland Air Force Base (KAFB), will house the company’s new 200,000-square-foot New Mexico campus and bring hundreds of BlueHalo’s Albuquerque-based employees into a consolidated ecosystem. Its decision to expand in New Mexico over other locations preserves the existing 260 New Mexico jobs and creates an additional 64 jobs with an average salary of $90,000. The company is planning $60 million of capital investment into the site. The total economic impact for the project with existing and expanded operations is $3.2 billion over the next 10 years.

“We are excited about the selection of the MaxQ site for our new franchise technology campus in Albuquerque,” said BlueHalo Chief Executive Officer Jonathan Moneymaker. “This site represents BlueHalo’s long-term commitment to New Mexico and will not only enhance the company’s ability to support current and future programs at Kirtland Air Force Base, but will also serve as one of the major hubs across the BlueHalo Labs national infrastructure designed to fuel future innovations to solve some of the most complex technology problems and transition those to full production, getting real capability into the hands of those who need it most.” 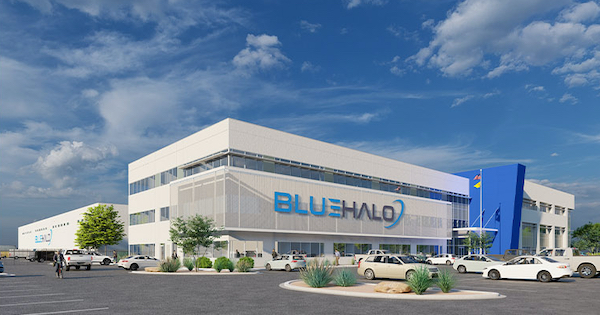 The new space will include an office complex, laboratories, manufacturing facilities, test areas, and secure spaces. BlueHalo will manufacture several critical products at the new facility in support of space, directed energy, and air and missile defense for the government and commercial customers.

“High-quality and good-paying careers, a massive economic impact for our state and the metro area, a significant capital investment — this is the kind of economic expansion and partnership that New Mexicans can get excited about,” said Governor Michelle Lujan Grisham. “Improved economic security and expanded opportunity for New Mexicans is what this administration will continue to promote, and BlueHalo represents an excellent investment in our ongoing efforts to diversify and accelerate our economy.”

“BlueHalo’s new, state-of-the-art technology campus will host the type of innovation that we do so well in New Mexico. Throughout my years in both the House of Representatives and the Senate, I’ve been proud to support New Mexico’s growing role as a leader in emerging defense and space technologies—and the new careers that brings to our state,” said U.S. Senator Martin Heinrich. “The ecosystem we have created, both inside and outside the fence line at Kirtland Air Force Base, has become the ideal location for leading innovators like BlueHalo to put down roots.”

The New Mexico Economic Development Department (EDD) has awarded BlueHalo $2.25 million from its LEDA job-creation fund. The City of Albuquerque Economic Development Department has pledged $250,000 through its LEDA fund, and will also act as fiscal agent for the state’s funding. BlueHalo will also apply for an Industrial Revenue Bond (IRB). All incentives are pending and contingent on approval by the Albuquerque City Council. 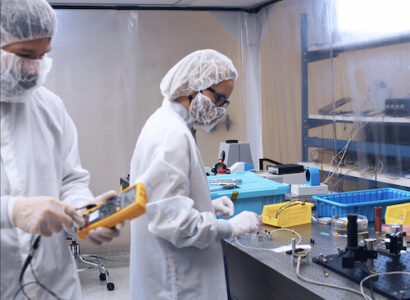 “Albuquerque is a national leader in space and directed energy technology research and development and the word is out that if you are working in these industries, this is the place to be,” said Mayor Tim Keller. “Our city is an ideal location for BlueHalo’s new campus, with our strong partnerships with Kirtland Air Force Base, Sandia Labs, the Air Force Research labs, as well as our highly skilled workforce and unmatched quality of life.”

“New Mexico has a long tradition of nurturing innovation and high-tech research,” said EDD Cabinet Secretary Alicia J. Keyes. “The state’s partnership with BlueHalo will bring the next generation of innovation to the state, and with that, the highly skilled jobs the state needs to build wealth and diversify the economy.”

“Albuquerque possesses key assets that make it a low-cost, high-value magnet for the aerospace and high-tech manufacturing industry,” said Synthia R. Jaramillo, City of Albuquerque Economic Development Department Director. “We’re thrilled BlueHalo is a part of the growing space economy in Albuquerque, bringing high-paying jobs and investment into our community.”

“BlueHalo’s expansion of its current manufacturing facilities in the Albuquerque region exemplifies the great opportunity here for firms in the aerospace and defense industry sector,” said Danielle Casey, AED President and CEO. “The estimated additional economic impact of more than $52 million in the first three years alone is strong evidence that the support offered by the state and the city will benefit the local economy by more than twenty-fold.”

The BlueHalo team working at the New Mexico campus will be focused on continued technology innovation and rapid transition to manufacturing for the Space Technologies across Advanced Radio Frequency (RF) Systems; Laser Communications; and Space Qualified Electronics and Systems, including Stabilized Precision Optics and Tracking (SPOT).