By Jack Rogers
From the March/April 2021 Issue

Two calamities unleashed horrific damage on America in 2020: one an invisible onslaught from a plague that originated overseas, the other a volcanic eruption of domestic demons that have festered in the United States in one form or another since the Civil War.

In 2020, the front lines of both of these battles intersected in one place, like two F5 tornadoes weaving a path of seemingly random destruction. The full force of the coronavirus pandemic—and an assault by home-grown extremists on our American democracy—both touched down on the ground last spring in Michigan.

Standing at the crossroads of history to meet these twin threats was Governor Gretchen Whitmer. In this exclusive interview with Business Facilities, Gov. Whitmer tells us in her own words what it was like to deal with an unprecedented public health crisis while at the same time facing down an attempt to overthrow the state government of Michigan.

The Wolverine State was hit hard in the first wave of the COVID-19 outbreak last spring. Whitmer was one of the first governors to sound the alarm about the pandemic, declaring a state of emergency on March 10, 2020 and issuing a strict shelter-in-place order.

Since the beginning of this crisis, Michigan’s thriving biotech and pharma sector has been on the front lines of the battle to defeat the virus: in his first trip outside of Washington DC after taking office, President Biden came to Michigan last month to hail the expansion of Pfizer’s primary COVID-19 vaccine production facility in Kalamazoo, which doubled the output of vials filled with the company’s life-saving vaccine doses. 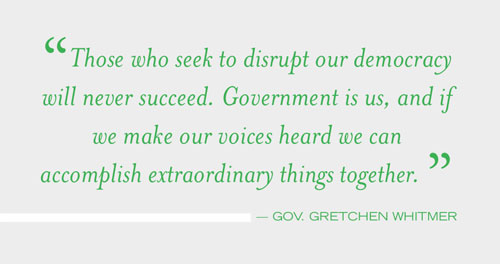 During 2020, Gov. Whitmer’s Administration produced 23 COVID response programs that distributed $240 million in relief funds to more than 24,000 small businesses throughout the state.

Early on, the governor recognized that the coronavirus was exploiting systemic weaknesses and hitting some communities much harder than others. She adjusted Michigan’s response to target attention where it was needed the most. “The pandemic has highlighted the staggering impact inequality has on the health of people of color, especially in the Black community, which has been disproportionately impacted by the virus,” Whitmer explained. “Black Americans represent nearly 14 percent of Michigan’s population, yet in the early weeks and months of the pandemic, they represented 40 percent of COVID deaths. That’s why we moved quickly to establish the Michigan Coronavirus Task Force on Racial Disparities, which set out to reduce the disparities in the mortality rate of COVID-19 and connect those interventions to the state’s longer-term efforts.”

Gov. Whitmer also has made mitigating the pandemic’s impact on students and teachers a top priority. She called on state school districts to provide an in-person learning option by March 1: at presstime, 97 percent of traditional school districts in MI had achieved this goal.

Whitmer has proposed $250 million to fund the implementation of best practices to support student academic recovery and post-secondary readiness and transition, as well as funding to recruit more teachers.

“Providing equitable funding and resources for schools so that students don’t fall through the cracks because of the pandemic must be a priority,” Whitmer told BF. “My administration proposed the largest investment in K-12 education in state history without raising taxes. Students, teachers and parents alike have adapted to constantly changing circumstances throughout the pandemic in remarkable ways, and it is crucial that we get kids back in school safely.”

Whitmer has established a goal of increasing the number of working-age adults in Michigan with a skill certificate or college degree from 45 percent to 60 percent by 2030.

“The Michigan Reconnect scholarship program is the largest effort in state history to ensure that more than 4.1 million Michiganders who are 25 and older now have an opportunity to earn a tuition-free associate degree or skill certificate from their local community college,” Whitmer said.

PLANNING FOR AN ALL-ELECTRIC FUTURE

Gov. Whitmer’s plans for Michigan’s recovery include an ambitious effort to ensure that the birthplace of the automotive assembly line defends its crown as the nation’s transportation powerhouse in the 21st century. Rebuilding Michigan, a bonding program created by Whitmer, aims to raise $3.5 billion to upgrade Michigan’s transportation infrastructure during this decade, replacing hundreds of aging roads and bridges without raising taxes.

Whitmer created the Connecting Michigan Taskforce (CMIT), led by MEDC, to bring together state agencies and private sector partners to increase broadband access across the state. “With the rise of remote work, virtual learning and telemedicine, universal access to broadband is a clear and urgent priority for every Michigan resident, business, region and community,” she said.

The Wolverine State also is ahead of the curve in getting its share of jobs from reshoring as businesses move to bring overseas supply chains back to the U.S. in the wake of disruptions caused by the pandemic.

“While many states are just now seeing the benefits of a domestic supply chain, Michigan recognized this opportunity long ago,” Whitmer told BF. “Onshoring and near-shoring were embedded into the state’s FDI Strategy and the MEDC’s five-year strategic plan long before the virus arrived. Due to smart planning and strategic investments to double-down on our unique strengths, Michigan is poised to deliver the kind of solutions that are critical to reshoring success.”

Michigan has recorded the fastest job growth from foreign direct investment over the past five years. Since 2016, the state has been the destination for nearly $12 billion in FDI.

A ‘DRESS REHEARSAL’ IN LANSING FOR JAN. 6 ATTACK ON U.S. CAPITOL

At the end of March 2020, President Trump pivoted from a 15-day national lockdown and began agitating for a full reopening of the U.S. economy—despite an exponentially expanding pandemic. Trump began attacking Democratic governors who had issued the strongest emergency orders to mitigate the pandemic, including Gov. Whitmer.

On April 17, the president tweeted “LIBERATE MICHIGAN!” (and Minnesota and Virginia), encouraging state officials to overturn the governor’s emergency orders and telling state residents that their “2nd amendment rights” also were in jeopardy.

On April 30—as the Republican majority in the MI state legislature debated a vote to overturn Gov. Whitmer’s shelter-at-home order (an order later declared constitutional by the Michigan Supreme Court)—a group of heavily armed domestic terrorists staged what Rep. Jamie Raskin, the House impeachment manager, later called “a dress rehearsal” for the Jan. 6 attack on the U.S. Capitol.

People wearing flak jackets and armed with military assault rifles—many from the same white supremacist gangs that later attacked Washington DC—took advantage of Michigan’s “open carry” law and forced their way into the legislature’s gallery. They crammed themselves against the entryway to the Michigan House floor, where they were held at bay by the chamber’s sergeant at arms as they chanted “Let us in!” and screamed epithets aimed at Gov. Whitmer.

“Armed protestors stormed the Michigan Capitol and stood in the gallery, long guns in hand, looking to intimidate legislators doing their job to serve the people of Michigan,” Whitmer recalled.

The extent of the threat to the safety of Michigan’s governor was made chillingly clear in August, when the FBI charged 13 people with plotting to kidnap Whitmer and overthrow the state government. We asked Gov. Whitmer what needs to be done to make sure that domestic terrorists can’t disrupt our democracy and threaten our public officials.

“I never thought that when I took the oath of office, I’d be telling my daughters and family about a plot against me two years later,” Whitmer told us.

“Violence has no place in civil society and those who seek to disrupt our democracy will never succeed,” she declared. “That being said, leadership starts from the top down. When leaders speak, their words matter. They carry weight. I know that. It’s why I watch my words closely and take responsibility for them.”

Whitmer continued, “leaders at every level of government must condemn language that spreads fear, incites hatred and deepens divisions. Our leaders ought to build trust, treat everyone with respect and embody civility.”

In the wake of what happened in Lansing last April, we wondered if Gov. Whitmer believes it’s possible to protect state capitals without limiting public access in states like Michigan.

We asked Gov. Whitmer whether the threats she faced from armed extremists would make her hesitate to recommend a career in public service to a young person who asks her whether it’s worth the risk. Michigan’s governor answered this question without hesitation.

“My career in public service has been incredibly rewarding. I got into this world because I wanted to make people’s lives better. I encourage anyone who is willing to work hard and make the world a better place to explore a career in public service,” she said. “Law enforcement works hard to monitor threats, and I fully trust them to keep our state and nation safe.”

“Folks who bully, harass or terrorize are trying to discourage and dissuade any kind of action. They think that their threats and the ever-present pull of cynicism are too powerful to overcome, but they are wrong,” Whitmer said. “Government is us, and if we show up and make our voices heard, we can accomplish extraordinary things together.” 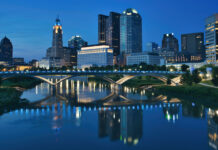