By the Business Facilities Staff
From the January/February 2021 Issue

North Carolina is Business Facilities’ 2020 State of the Year, the first time NC has earned BF’s top honor, which has been bestowed annually by the magazine since 2007.

“North Carolina has been a rising star on our radar for several years,” BF Editor in Chief Jack Rogers said. “The successful execution of a regional economic development strategy targeting a diverse group of growth sectors in North Carolina is reflected in the proliferation of top-ten results for NC in our state rankings.” 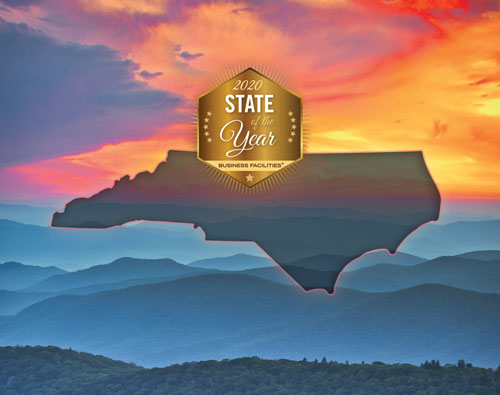 “North Carolina is leveraging its advantages—including a prime logistics location, a steadily expanding skilled workforce and impressive higher education resources—to seal the deal on one big project after another,” Rogers said.

“The Tar Heel State has put down a marker that it’s ready to compete for a leadership position in the emerging growth sectors of the 21st century,” he added.

Healthcare insurance companies have added more than 3,000 jobs in the region since 2010, and with the growth of cloud, data and analytics capabilities, all industries are scaling up their tech talent. With a strong base of information security professionals, Charlotte is primed to grow in this space. More than 40 health tech startups call the region home. These companies are incorporating technology into daily hospital management, online patient consultation and software design across the healthcare industry.

“Growing companies like PennyMac Financial want to expand in North Carolina even during a pandemic because of our strong talent pipeline, steady business climate and our exceptional quality of life,” said Gov. Roy Cooper.

PUSHING THE ENVELOPE IN BIOTECH

Resources from North Carolina’s thriving biotechnology sector are playing a leading role in the fight against COVID-19.

In November, the U.S. International Development Finance Corporation (DFC) approved a $590 million loan to help ApiJect Systems, Corp. build a one million-square-foot, multi-facility campus at the edge of Research Triangle Park in Durham, NC. The Connecticut-based company will manufacture its experimental injection device for the mass delivery of vaccines at the new ApiJect Gigafactory, which will employ approximately 650 workers.

The loan will help ApiJect deliver a projected annual capacity of up to three billion vaccine doses, a monthly capacity equal to the full U.S. population coverage. The facility will be able to handle 15 different drugs, vaccines and therapeutics at the same time, including almost all leading COVID-19 candidates. Additionally, ApiJect will have the ability to switch production quickly, allowing the company to produce in mass quantities and rapidly change to more effective or efficient vaccines as needed.

The project marks the first approved loan under the Defense Production Act (DPA) that enables DFC and the U.S. Department of Defense (DoD) to collaborate in support of the domestic response to COVID-19.

The Gigafactory will be Biosafety Level 2 (BSL-2) capable and support vaccine candidates that require standard cold storage or ultra-cold storage down to -70 degrees Celsius. Each manufacturing line will be isolated, allowing for up to 15 different drugs to be packaged simultaneously. In addition to its BFS production lines, the ApiJect campus will house two separate special-purpose drug manufacturing facilities to handle drugs such as the next generation of antibiotics and cytotoxic drugs, plus an onsite needle and cannula factory to ensure a domestic supply of this important medical supply chain item.

Merck, a leading global biopharmaceutical company, recently invested more than $650 million to build a new production facility at its Maurice R. Hilleman Center for Vaccine Manufacturing in Durham and expand its packaging operations in Wilson, creating a total of 400 new jobs.

This project will enable Merck to meet growing demand for GARDASIL and GARDASIL 9 recombinant human papillomavirus (HPV) vaccine, which is used to prevent several cancers associated with HPV.

“The life science industry cluster in North Carolina enjoys a well-earned reputation as one of the nation’s leading centers for biotech innovation,” said North Carolina Commerce Secretary Anthony M. Copeland. “Merck’s long experience in our state gave them the confidence to bring this important new operation to North Carolina.”

North Carolina is poised to become a national leader in the emerging growth sector of gene therapy.

The site is expected to create 200 jobs over the next two and a half years. The Research Triangle area project confirms North Carolina’s growing role in gene therapy, a promising approach for fighting a host of challenging genetic diseases. “The pandemic has highlighted the importance of science and innovation to keep us healthy,” Gov. Cooper said. “Companies like Taysha Gene Therapies continue to expand in North Carolina because we have the scientists, skilled workers and climate for innovation they need to tackle healthcare’s toughest challenges.”

Taysha Gene Therapies, headquartered in Dallas, is developing an extensive portfolio of gene therapies and expects to file as many as four Investigational New Drug (IND) applications for its product candidates next year. In Durham, the company plans to invest $75 million in capital expenditures over a period of two and a half years to build out and operate a 187,000-square-foot, commercial-scale manufacturing facility for preclinical, clinical and commercial production of its gene therapy product candidates. The site will be developed to meet the rigorous FDA benchmark of a current Good Manufacturing Practices (cGMP) facility.

“North Carolina has a thriving life sciences ecosystem with significant expertise in gene therapy manufacturing, and we are delighted to establish our manufacturing center in Durham,” said RA Session II, President, Founder and CEO of Taysha.

North Carolina’s economic base in the last century was centered on tobacco, textiles and furniture.

With world-class research and higher-ed facilities, NC has transformed itself into a forward-thinking, knowledge-based economy with the largest advanced manufacturing workforce in the southeastern United States. North Carolina is home to 40,000 engineers, with the state’s 53 universities and colleges a major source of talent for aerospace engineers.

Pratt & Whitney, a world leader in the design, manufacture and service of aircraft and helicopter engines, and auxiliary power units, recently announced it will invest $650 million through 2027 in a new Buncombe County, NC manufacturing facility.

“This investment will enable Pratt & Whitney to continue to modernize and transform its operations with cutting-edge technologies,” said Chris Calio, president, Pratt & Whitney. “Turbine airfoils are a critical component across our engine portfolio and demand will increase significantly as the market recovers over the next several years. We need to invest today to ensure that we have the infrastructure, production capabilities and workforce in place to meet future market demand and to provide the best products to our customers worldwide.”

Company plans call for the development of a new 1 million-square-foot advanced manufacturing facility on a 100-acre tract overlooking Interstate 26, south of the French Broad River.

A BEVY OF HIGH-TECH EXPANSIONS

Last year, semiconductor and LED maker Cree Inc. announced will invest up to $1 billion in expansion of its silicon carbide capacity with the development of an automated silicon carbide fabrication facility and a materials mega factory at its U.S. campus headquarters in Durham, NC.