Many states across the country will implement changes to their minimum wage laws in 2021, with the majority of them already in effect, according to payroll experts at Wolters Kluwer Legal & Regulatory U.S. The company has prepared a comprehensive analysis of legislative updates in 25 states that will raise the minimum wage this year; 21 of those states enacted increases on January 1.

As of January 1, the City of Emeryville, CA has the highest minimum wage rate in the country, at $16.84 per hour, followed by Seattle at $16.69, while the highest state rate will be California’s at $14.00 per hour. New York and Oregon, which both have regional minimum wage rates, will see their highest wages reach $15.00 in New York City and $14.00 in the Portland Metro Area effective July 1, 2021. A few states’ wages remain on the lower end of the spectrum, with some state minimums coming in below the federal wage rate, and others with a lower incremental increase. The lowest rates of $5.15 are in Georgia and Wyoming. However, most employers and employees are subject to the higher federal rate of $7.25 per hour. 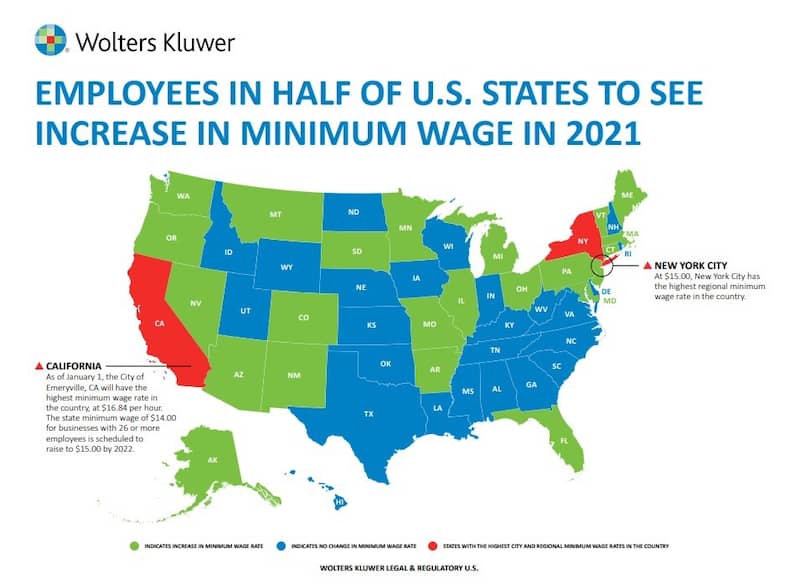 Some of the new rates in states such as California, Colorado, Maine, Washington are the result of previously approved incremental increases to reach a specific amount that is considered to be a “living wage.” Other states’ increases reflect an annual cost-of-living adjustment, which accounts for the changes in states like Alaska, Florida, Minnesota, and Montana.

“Those states following the step-up approach tend to have higher minimum wage rates than those taking a cost-of-living adjustment approach,” said Barbara O’Dell, JD, an Employment Law analyst at Wolters Kluwer Legal & Regulatory U.S. “The trend towards regional minimum wages, such as those in New York and Oregon, also reflect lawmakers’ recognition that costs of living are higher in large metro areas than they are in other parts of the state.

“With the change in the presidential administration coming in January, we are closely monitoring for potential changes in the federal minimum wage rate which has remained at $7.25 an hour since July of 2009,” she continued. “The incoming Biden administration has expressed interest in increasing the federal minimum wage, but whether legislation to increase it would pass is an open question.”