Leading U.S. cities are expanding their clean energy efforts to tackle climate change, yet many more lag far behind, and only one-fifth have community-wide greenhouse gas reductions goals and are on track to meet them, according to the newly-released American Council for an Energy-Efficient Economy (ACEEE) 2020 City Clean Energy Scorecard. New York City leaped to first place in the ranking—spurred in part by a new law ensuring upgrades to many inefficient buildings.

“This recognition is meaningful for our city, and a result of determined efforts by dedicated government and community leaders,” said Mark Chambers, director of sustainability for the City of New York. “There is still urgent action needed from New York, and all cities, if we are to truly confront the climate emergency.” 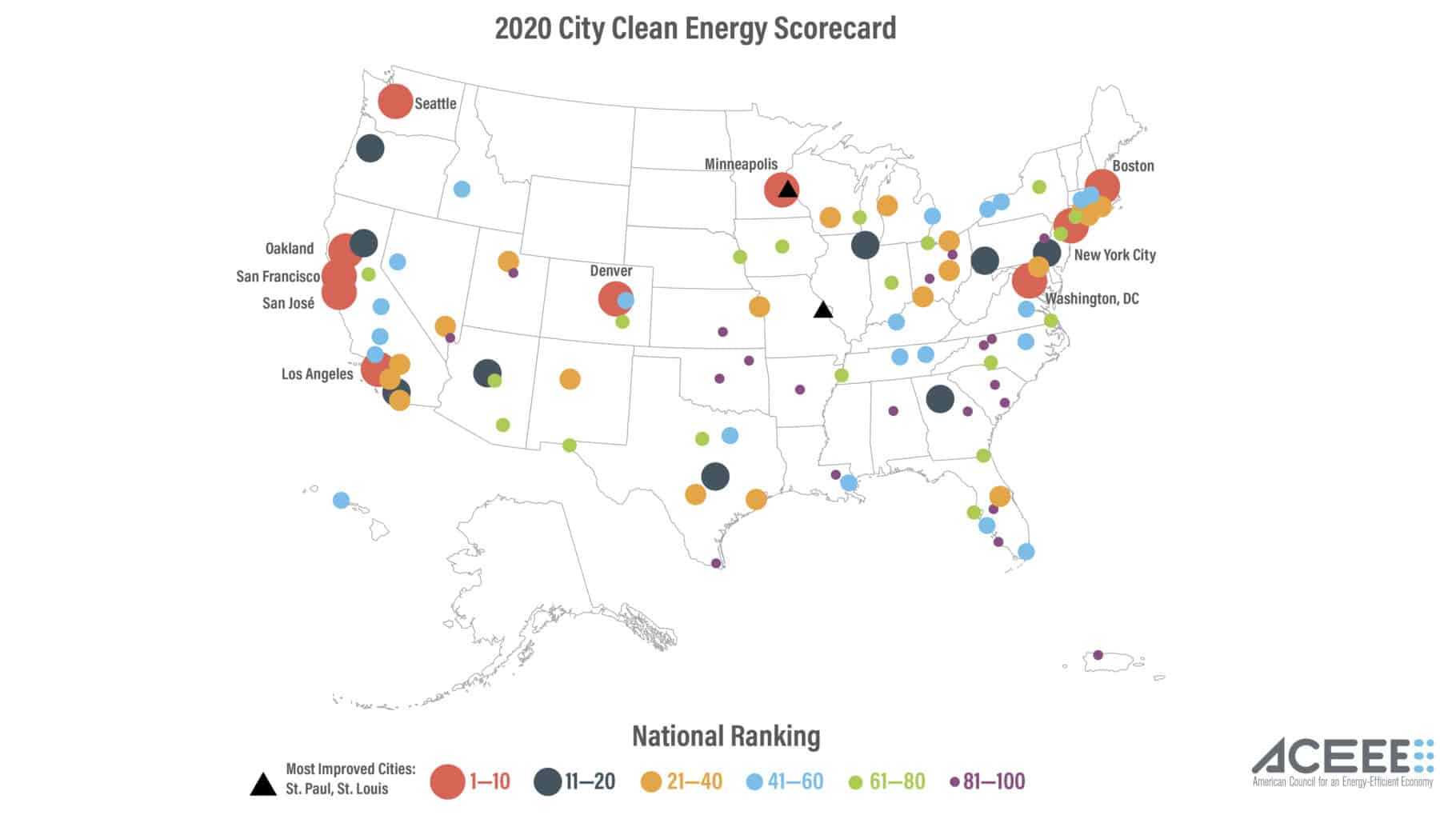 Rounding out the top five cities, Boston and Seattle tied for second place and Minneapolis and San Francisco tied for fourth place.

“City leadership on building energy efficiency and overall climate action is more important than ever,” said Seattle Mayor Jenny Durkan. “While the federal government has used its leverage to prop up polluting energy sectors, cities are stepping up with innovative and bold policies and programs—like our ban on heating oil—that are helping us transition away from dirty energy. Fossil fuels are damaging the health of our residents and our economy and I’m inspired by the all work happening in cities across the nation focused on reducing their use.”

“Clean energy is a critical part of responding to our ongoing climate crisis,” said St. Paul Mayor Melvin Carter. “We appreciate ACEEE’s important work, and its support of our efforts to build a more equitable, clean energy future in St. Paul.”

The ACEEE scorecard analyzes the efforts of 100 major U.S. cities—home to 19% of the nation’s population—to make buildings and transportation more energy efficient and scale up the use of renewable energy. It provides the most comprehensive national measuring stick for climate progress and a roadmap for future improvements. Over time, the Scorecard has adopted metrics to assess community involvement and equity as part of cities’ clean energy efforts.

The report, expanded from 75 cities last year, finds that 20 cities are now on track to meet their own community-wide greenhouse gas emission reduction goals—nine more than a year ago. Yet the remainder of the cities are not on track, haven’t provided adequate data, or have not set a goal.

“Many cities are really seizing the moment and embracing policies that help them fight climate change, while too many others are, frankly, doing very little,” said David Ribeiro, director of ACEEE’s local policy program and the lead report author. “We want to show all the cities, even the leaders, the further steps they can take to cut carbon emissions most effectively and equitably.”

Among the report’s findings:

The report assesses policies adopted by May 1, 2020. The public health and economic devastation wrought by COVID-19, as well as the growing outrage over racial disparities and their impacts on communities of color, could cause city policy priorities to change. The report argues that as cities focus on economic recovery in the context of COVID-19, energy efficiency and renewable energy remain a crucial strategy for creating jobs and keeping investment within local communities. Furthermore, a closer focus on equitable planning and investment can yield benefits that have historically been unavailable to communities of color.

“City budgets are under enormous strain. Clean energy policies are part of the solution because they create jobs while reducing energy costs for households, businesses, and city government,” said Ribeiro. “By keeping up and expanding clean energy efforts, cities can support the economic recovery while combatting the climate crisis.”

The scorecard is based on data collected from cities, utilities, and numerous publicly available sources. Government staff members from all 100 cities were given the opportunity to comment on a draft of the findings.