By the BF Staff
From the July/August 2020 Issue

There’s increasing marketplace evidence showing consumers want to be assured that the energy they use in their homes and businesses is coming from economical, reliable and sustainable resources. However, above all, those same individuals also want energy options that fit their respective lifestyles and business goals.

Early in 2020, Hoosier Energy announced a new long-range resource plan designed to provide its member distribution cooperatives with reliable, affordable and environmentally sustainable energy through a transition to a more diverse generation mix that includes a combination of low-cost wind, solar, natural gas and storage. The plan ultimately provides a foundation for supply cost stability and predictability while reducing Hoosier Energy’s carbon footprint by nearly 80 percent.

“The first step in our planning process was prioritizing what matters most to member-consumers at the end of the line when it comes to the generating resources that serve them,” said Hoosier Energy President and CEO Donna Walker. “We believe that our new 20-year resource plan is the one that best meets their priorities.”

Hoosier Energy’s efforts haven’t gone unnoticed. In fact, Standard & Poor’s (S&P) recently upgraded Hoosier Energy’s credit ratings from A to A+, and assigned a stable outlook. In the report issued early August 2019, S&P attributed the upgrade to lower fixed costs, a board-adopted policy to build equity and an accelerated debt repayment plan. S&P also noted that Hoosier Energy’s membership of 18 distribution cooperatives is diverse and stable. In addition, as a result of the G&T’s long-range resource plan announcement, Moody’s Investors Service changed its outlook for Hoosier from stable to positive.

Last October, Hoosier Energy hosted Electrify Indiana, a statewide event aimed at advancing dialogue on beneficial electrification—the deployment of electric-powered devices where at least one of the following goals is met without adversely affecting the others: consumer savings, reduced pollution, grid resiliency and improved products and quality of life.

Nearly 200 state and local leaders along with members of the private sector gathered at the G&T’s headquarters to focus on how to identify and capture beneficial electrification opportunities. Because of that gathering, Hoosier Energy and its members formed a committee of eight distribution co-op representatives to evaluate the cooperative role in bringing the benefits of emerging technologies to their respective communities.

“Investing the time and resources to find ways to use today’s technologies efficiently and cost-effectively in residential, commercial and industrial applications has far-ranging implications for the logistics, manufacturing and agribusiness industries,” said Bob Richhart, Chief Technology Officer at Hoosier Energy. “They can change how farms operate, how manufacturers manage power quality, how food processors manage heat sources and so on.”

“One of the biggest challenges for the industry is the impact emerging technologies will have on the electric utility model. Electric vehicles—from cars to semis—are becoming big disrupters. Combine that with technologies that promise large-scale energy efficiencies for commercial operations and you have more than just game changers. You have a new electric utility model.” 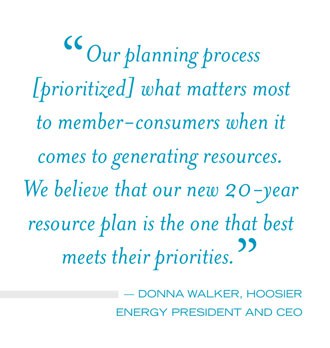 Hoosier Energy recently applied for a grant through the Indiana Utility Group to place direct current (DC) fast chargers at strategic interstate locations that crisscross the southern half of Indiana. “Electric fleets are coming, and with big distributors like Amazon ordering 100,000 electric vehicles, we want to help address range anxiety for the logistics industry, which plays a big role in the economic vitality of our communities,” Walker said.

Additionally, Hoosier Energy is exploring residential and commercial scale battery storage pilot programs for the near future. “On a commercial scale, battery packs could help resolve critical power quality issues. They also could optimize the production capability of renewable energy resources, such as backing up a solar generation system by storing energy and discharging at night,” Richhart added.

On a larger scale, Hoosier Energy believes there’s a significant amount of potential for the possibility of tying generation sources together to create micro-grids that could ultimately strengthen the reliability and resiliency of the larger interconnected power network. “The possibilities are there, and we’re exploring them,” Walker said.

“Finding ways to integrate our generation portfolio, new and emerging technologies, beneficial electrification and even battery storage will ultimately help us continue to improve and strengthen the grid,” she concluded.

Near the banks of the Ohio River in Southern Indiana, the River Ridge Commerce Center is quickly becoming the Midwest region’s premier business and industrial park. Leveraging advantages such as its central location, a large bank of readily developable land, a business friendly climate, major employers and a nearly unlimited supply of quality aquifer water and other resources, River Ridge has seen meteoric growth in the last decade. It has become an economic magnet for the entire region.

Combined employment at the center is more than 10,300, and the business park supports a total of more than 16,900 jobs throughout the region, according to a recent Economic Impact Analysis by Policy Analytics. Those jobs equate to more than $630 million in labor income and a $2.5 billion economic impact.

So what’s behind the rapid growth?

Nikki Lanier, senior vice president and regional executive of the Louisville Branch of the Federal Reserve Bank of St. Louis cited River Ridge’s location within a day’s drive of two-thirds of the United States as a key driver of its growth. “The location is fantastic, so logistically we’re really well located,” she said. “So there are lots of ways to move goods across this region to all parts of the United States.”

River Ridge also benefits from its proximity to Louisville, KY, which is home to UPS Worldport, the shipping giant’s largest package-handing and sorting hub. It also has convenient access to four major interstates: I-65, I-64, I-265 and I-71 via the newly constructed Lewis and Clark Bridge. Meanwhile, the Commerce Center offers Class I and short line rail access and is adjacent to the Port of Indiana-Jeffersonville for easy access to inland waterways between the East Coast and Gulf of Mexico.

In recent years, the Commerce Center has benefited from its ability to quickly deliver for site developers and tenants. As master developer for a 6,000-acre park with nearly 4,000 acres remaining, the River Ridge Development Authority has invested more than $100 million in roads, sidewalks, site preparation, demolition and utilities to facilitate growth. As a result, the park boasts hundreds of acres of shovel-ready land as well as a 1,000-plus-acre megasite that can accommodate up to four million square feet of manufacturing space.

“We are poised for continued growth for the foreseeable future,” said River Ridge Executive Director Jerry Acy. “We have the space and infrastructure already in place to accommodate almost any project at River Ridge.”

In addition to River Ridge’s logistical advantages, it provides numerous financial benefits for tenants. The park is an Indiana Urban Enterprise Zone and can offer relocation tax credits and other competitive tax incentives to major employers. In addition, it is near two U.S. Foreign Trade Zones that allow companies to compete globally with savings on certain import duties.

Meanwhile, the state of Indiana ranked in the top 5 in the U.S. in 2019 for business, according to Executive magazine. And Tax Foundation ranks Indiana among the Top 10 states for its business tax climate due to its low property and corporate income tax rates.

All these advantages have contributed to bring new business and jobs to River Ridge.

In 2019, the center saw strong levels of private investment. Medline Industries opened a 1.2 million-square-foot logistics and distribution center, and Niagara ramped up operations at a 500,000-square-foot water bottling and distribution facility, where it already is planning an expansion. Pharmacord LLC is developing a site where it will locate 850 jobs, Layn USA is investing to create the world’s largest cannabidiol (CBD) manufacturing facility.

Meanwhile, numerous national developers have come to River Ridge to develop speculative space that is ready for new industrial and commercial users.

In 2020, River Ridge plans to break ground on a Class A office and technology park. “We made tremendous progress in 2019 and look forward to continuing that trend in 2020 and beyond,” Acy said.

Want to learn more about doing business in Indiana?