It’s the truth. The very roadways and bridges people travel on to get to New Braunfels, TX were platted by the founding families in the first 30 days upon arrival of the Comal River in 1845. Powered by the German Adelsverein and led by one Prince Carl Solms, settlers of the new world came in droves, weighed down with their hope chests that carried their tools and ideas of a better life.

Upon arrival, the new settlers began creating their new town and remembered the old Braunfels town and lessons learned from hundreds of years of civilization. They created a public-school system, churches, used their skills as engineers and builders, built business and trade and along the way, formed many social clubs such as the sangerverein (singing) and schutzenverein (sport shooting) within a short time. By 1850, New Braunfels became an urban nucleus of trade and commerce with a population of 1300 people, brimming with an entrepreneurial spirit; this still remains true in 2020 – 175 years later! 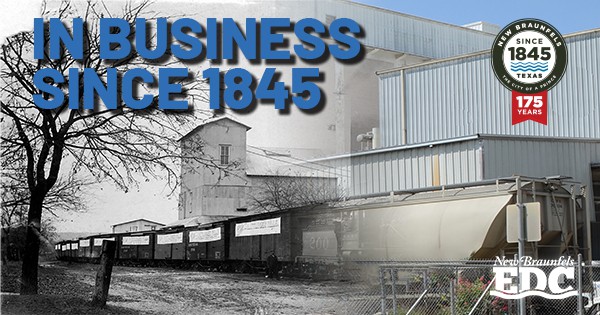 Not much has changed since 1845, in terms of “work hard and make good progress” and core principals set by the founders: hard work, civic pride and family devotion. Entrepreneurship grew into a few notable industries: textile and flour mills, cotton gins and aggregate products. Although new business has helped New Braunfels develop into a modern city, there are still quite a few businesses that have remained and flourished, becoming an integral part of the New Braunfels culture. You can ask most people in the city and they can point you to Naeglins which is the oldest bakery in Texas, hand you a copy of the New Braunfels Herald Zeitung which is the local newspaper that converted from German print to English in 1967, or direct you to the ADM Mill, established in 1886 and still in operation today.

As they say, all roads lead back to New Braunfels and it’s the location on IH-35, about halfway between Austin and San Antonio that has made New Braunfels, in part, a popular location to live, work and play. The location factor is what has brought many businesses to the area, including the Walmart Distribution Center that took advantage of the opportunity as early as the 1980s. Additionally, new companies such as Continental Motors, Canadian General Tower, McCoys Building Supply, Calendar Holdings and TaskUs all recognized the value of the location factor as well AND the quality of life factor.

With over 300 days of sunshine and 550+ acres of outdoor water recreation, New Braunfels attracts businesses and a matching skilled workforce alike. A favored location for growing families, the city is growing at an average of 6% a year, or 102% just in the last decade — and the population total is expected to reach 105,500 by 2024. The New Braunfels employed labor force has increased by 84% since 2003, with 73 percent of jobs in New Braunfels filled by employees commuting into the area while 8,000 live and work here.

Schools – New Braunfels has some of the greatest school districts, and local access to higher education facilities helps to fill the workforce supply for future generations. New Braunfels has two great school districts that educate almost 30,000 students as well as the Alamo Colleges – Central Texas Technology Center (CTTC) that serves as a regional workforce development campus and provides higher education opportunities. Additional higher education opportunities are provided by Howard Payne University, where Bachelor and MBA classes are offered and Wayland Baptist University, where first class nurses are trained in their exclusive nursing school.