If you haven’t been to St. Petersburg, Florida lately, chances are you’ll be amazed by the city’s revitalization that is strikingly similar to a young San Francisco or Austin. “Silicon Shore,” as St. Pete locals have dubbed the city, has organically evolved into a cultural mecca, drawing more businesses and talent every day — 150 people move to the region daily. 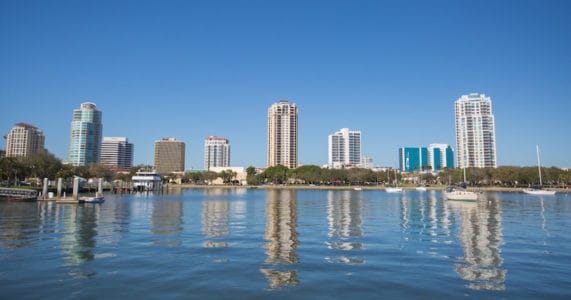 Local economic development officials attribute the recent boom to a community-wide strategy called Grow Smarter, which identifies five target industry sectors primed for the most growth: Financial Services, Data Analytics, Marine and Life Sciences, Specialized Manufacturing, and Creative Arts and Design. Industry leaders within those sectors are expanding their footprint in the greater St. Pete area and laying down roots for the long haul.

In late 2019, L3 Technologies, the global aerospace and defense technology company with $17 billion in annual revenue and 50,000 employees and customers in 130 countries, located its divisional headquarters in the heart of Downtown St. Pete. The urban location surprised industry peers, as it consolidated L3’s locations in Sarasota and St. Pete. The deal was ranked No. 1 for tech office space deals on CBRE’s 2019 Tech Talent report.

In March 2019, Jabil, the largest company headquartered in St. Pete with revenue of more than $25 billion last year, completed the first of four phases of construction planned as part of a $67 million expansion of its headquarter campus in St. Pete.

The design-centric Innovation Center spans 40,000 square feet, housing approximately 100 employees in five labs. The St. Pete R&D facility is one of three for Jabil, with others being in southeast Asia and San Jose.

“When it comes down to it, we’re a St. Pete company,” Jabil CEO Mark Mondello said. ” And I’ll tell you: the offers we got to move to other locations? I’m really glad we didn’t.”

Jabil has roughly 200,000 employees and 100 facilities in 29 countries but intends to maintain its head office in St. Pete where it grew into a corporate powerhouse.

The largest independent brewery in the state of Florida, 3 Daughter’s Brewing brews, manufactures and distributes more than 60 craft beers from its headquarters in St. Pete’s Grand Central District. Founded to see “How many beers it would take to put three daughters through college,” 3 Daughter’s is a local favorite that makes the most of every opportunity to give back to the community it calls home.

Most recently, 3 Daughter’s shifted a portion of its manufacturing to hand sanitizer, offering it for free to front line healthcare workers. 3 Daughter’s Co-founder Leigh Harting was featured on the television show Live with Kelly and Ryan where Harting received $5,000 for the brewery’s determination to give back. Rather than keeping the funds, however, 3 Daughter’s paid it forward and purchased $5,000 in gift cards from local restaurants.