By Mary Lynn Beaver
From the March/April 2020 Issue

In today’s world, just about anything and everything consumers use is manufactured, processed or put together somewhere. Manufacturers contribute $2.37 trillion to the U.S. economy, and employ more than 12.8 million workers, according to the National Association of Manufacturers (NAM). 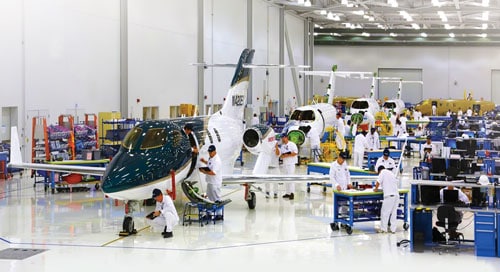 Despite a stronger dollar, slowing global growth and lingering trade uncertainties, U.S.-manufactured goods exports were up 4.7 percent and 5.6 percent in 2017 and 2018, respectively, according to the U.S. Commerce Department.

Gone are the assembly lines of old. Now, innovative technology is catapulting manufacturing into a new age of efficiency across a plethora of industries. From aerospace to medical devices, large-scale assembly lines are utilizing advanced sensors and robots and employing image-analysis technology—cameras that use artificial intelligence—to review their products and handle quality control.

Companies are upscaling their employee base and working with the public and private sectors to grow the workforce of tomorrow. Across the board, technology is transforming every aspect of the production process, and putting the ‘advanced’ in advanced manufacturing. Join us as we tour the leading locations in advanced manufacturing in North America.

Name any sector that relies on expertise in today’s advanced manufacturing technologies, and Arizona rises to the top for its diversity of high-tech manufacturers.

“Our state has a long history of expertise in advanced semiconductor, aerospace and defense, and optics and photonics manufacturing—things that are foundational for many of today’s emerging technologies, said Sandra Watson, President and CEO of the Arizona Commerce Authority. “We lead the nation in aerospace and defense and semiconductor manufacturing employment, and also are top ranked for employment growth in the pharmaceutical and medical device sectors,” she said.

While U.S. manufacturing overall experienced a slowdown in growth in 2019, Arizona saw quite the opposite. The Grand Canyon state gained 6,600 new manufacturing jobs in 2019, growing 3.8 percent year over year.

“Manufacturing has the highest multiplier of any industry in Arizona at 2.38, meaning one direct job supports an additional 1.38 jobs, generating 234,232 indirect and induced jobs,” Watson said.

“Under Gov. Doug Ducey’s leadership, Arizona is experiencing incredible economic momentum, and our state is seeing its strongest manufacturing job growth in 30 years,” she said. “We now have more manufacturing jobs in Arizona’s economy—179,600—than we do construction jobs—178,900. Data show that in 2018, Arizona exported $19.5 billion worth of goods and the state’s manufacturing employment increased 9 percent from 2014 to 2018—compared to the national average of 4 percent.”

The trend is expected to continue as the state’s diverse manufacturing base continues to grow.

“We are a global leader in semiconductor manufacturing. The most advanced semiconductor fabricators in the world have a strong presence in Arizona,” she said, citing a who’s who of industry giants.